Lute expected to submit her report to UNSG around September 17 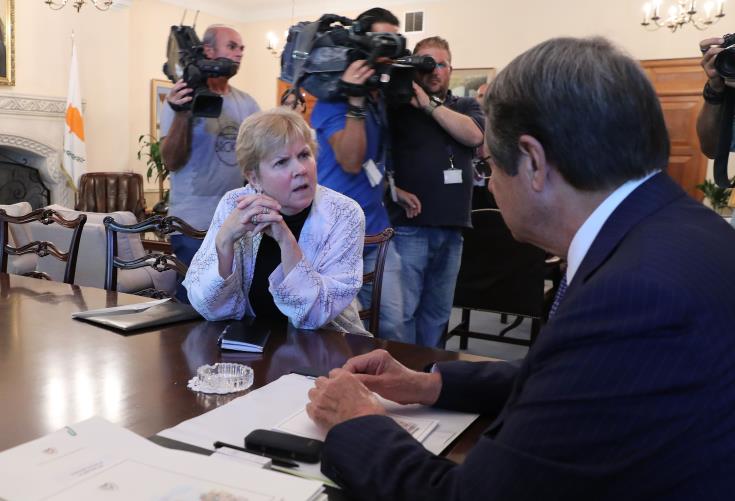 UN Secretary General’s special envoy on Cyprus Jane Holl Lute is expected to submit to Antonio Guterres her report on the outcome of her consultations with all parties interested in the Cyprus problem around September 17, a reliable source has told CNA.

CNA has learned that Lute is expected to meet with Greek Foreign Minister Nikos Kotzias in Athens on September 11. In London she will meet with British Foreign Secretary Jeremy Hunt and Minister for Europe Sir Alan Duncan, probably during the first ten days of September, and in Brussels with the High Representative of the European Union for Foreign Affairs and Security Policy Federica Mogherini, probably on September 13.

Lute met in Ankara on July 30 with Turkish Foreign Minister Mevlut Cavusoglu and had separate meetings on July 23 in Cyprus with President Nicos Anastasiades and Turkish Cypriot leader Mustafa Akinci.

President Anastasiades, who has expressed to Lute his readiness to re-engage into dialogue for a Cyprus settlement, is scheduled to arrive in New York on September 23 for the UN General Assembly, on the sidelines of which he will have a meeting with the UN Secretary General.

Nicosia does not rule out the possibility of a joint meeting between Guterres, Anastasiades and Akinci after the UN General Assembly if it is proposed by Guterres, a government source told CNA earlier this month.

Cyprus has been divided since 1974, when Turkish troops invaded and occupied 37% of its territory.  The latest effort to reach a Cyprus settlement was concluded in summer last year in the Swiss resort of Crans-Montana without a result.

By In Cyprus
Previous articleMainly fine over weekend, some localised cloud
Next articleAnimal lovers angered by dog ban at Limassol’s Molos promenade