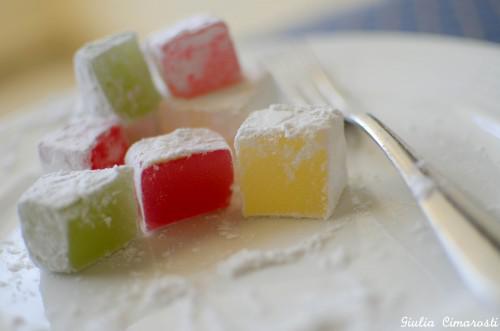 Loukoumi: The sweet temptation from Yeroskipou

The history of this sweet Cypriot delicacy dates back to 1895, when one of the ancestors of the current manufacturers first tasted a loukoumi during a trip to Europe. Returning to Yeroskipou, he and his wife started to produce this sweet which, more than 100 years later, has become an international brand name for Yeroskipou and the whole of Cyprus.
Paphos’ second largest municipality by population is now known throughout Europe not just for its links with the “Ieri Kipi” (Holy Gardens) of Aphrodite which gave the community its name, but for its gastronomic temptations, two of which have become the first Cypriot products to have secured the European Union’s “protected geographical indication”.
The famous loukoumi, as well as the almond sweet and the Paphos chewing gum that followed, have earned a place in the gastronomic books and tourist guides of Cyprus. The loukoumi has been made in the same way for more than a century, but now new technology allows improved quality, lower costs and better hygiene standards.

The ingredients remain few, but simple and natural, mixed together to create the jelly-like sweet delicacy. Specifically, the ingredients are sugar, flour, almonds and fruit fragrances. The loukoumi was the first Cypriot traditional product to secure protected geographical indication status under European Union regulation. This has opened up new opportunities for the local sweet. The certification also identifies all the genuine producers of the traditional Yeroskipou loukoumi, pre-empting the making of low-quality imitations.

The first loukoumi was rose-flavoured, produced by boiling fragrant rose petals and distilling the pure essence. The ingredients are mixed with boiling water in a giant cauldron, stirred regularly for a few hours until it is soft and creamy. The mixture is left to cool, before the various flavours are added. It is then placed in wooden boxes overnight to set. The last step is cutting the loukoumi into cubes which are then sprinkled with sugar and packed into small presentation boxes, the most intensive and costly stage of the entire process. As a fitting tribute to the island’s first certified traditional product, on October 17, 2004, the area won a Guinness Record for the biggest loukoumi ever made. The day has been declared “the Day of the Loukoumi” by Yeroskipou Municipality. Three days of hard work went into making a 2,543-kilo loukoumi, trouncing the 1997 record of 2,349 kilos.

Yeroskipou almond sweet
Koufeta amygdalou Geroskipou are roasted almonds covered with sugar and are produced in the Geroskipou municipality of Paphos district. This name is transitionally protected as a “Geographical Indication” in Cyprus and is candidate for registration as a “Protected Geographical Indication” in the European Union. This kind of confectionery product is also produced at Foini village and is known as Koufetes Foiniou.

History: The production of Koufeta amygdalou Geroskipou started in 1895 in the village of Geroskipou by Sofocles Athanasiou. The production know-how was passed down from generation to generation and remains unchanged. Koufeta Amygdalou Geroskipou, mainly sold in fairs (Aristidou & Vakis, 1992), have been awarded a prize at a special exhibition carried out in Stroumpi village in 1937. They have always been the traditional treat, offered during weddings/baptisms. 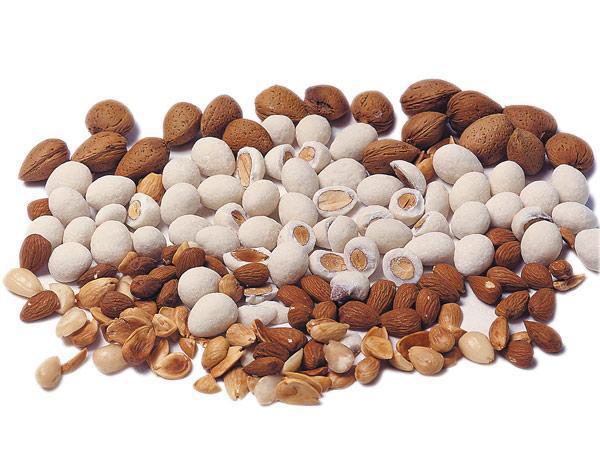 Paphos chewing gum
As recorded by Dioskourides in the 3rd century BC and Theοfrastos in the 1st century BC, resin from the trunk of the terebinth tree (Pistacia atlantica, Pistacia palaestina and Pistacia terebinthus) has been used in Paphos since antiquity. The resin seeps out from an incision made on the tree trunk with a sharp utensil. The resin (mastiha) appears in the incised spots, is crystal-like and flows in drops. Initially pale yellow, it becomes yellow with time because of oxidisation. It is a very particular, 100% natural product which, to the present day, is made by hand, just as at the end of the 19th century when production first started in Yeroskipou. 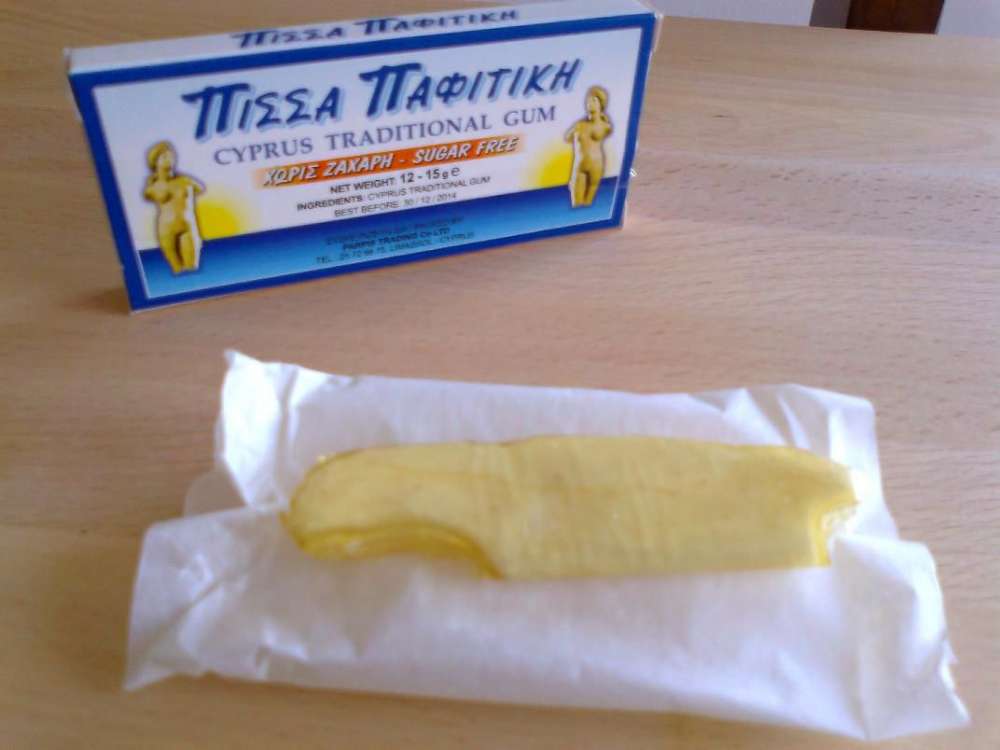