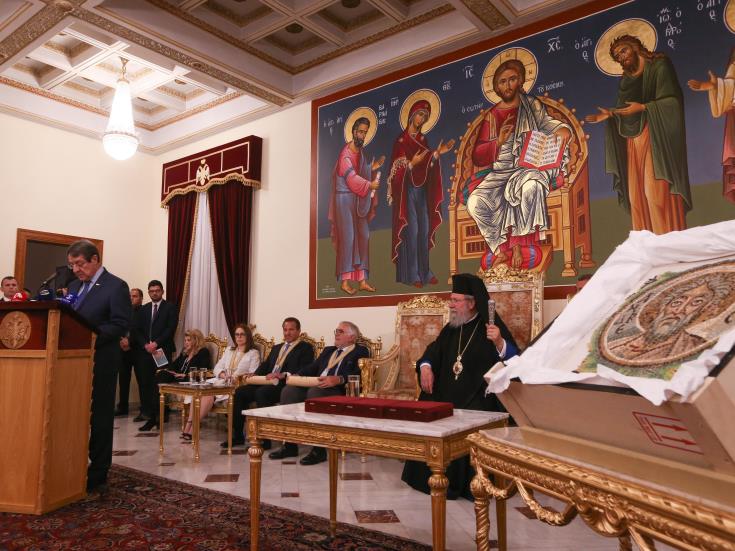 A rare and priceless mosaic of Apostolos Andreas on a medal, which has been looted from the Turkish occupied Panagia Kanakaria church in the village of Lythragomi, has finally returned home.

This is one of the last remaining pieces of the Kanakaria mosaics which has been repatriated. Most of the artefacts were located and repatriated between 1983 and 2015.

The mosaics were stolen after the Turkish invasion in 1974 by the Turkish art dealer Aydin Dikmen.

On Monday evening a ceremony took place at the Archbishopric in Nicosia where the mosaic was presented.

Cyprus President Nicos Anastasiades spoke of a moment of deep emotion for the whole of Cypriot Hellenism that marks a great culture and national victory for the return of looted heritage to Cyprus.

He recalled that in March 2015 a Committee was set up for Looted Cultural Heritage and assured that all measures and actions are taken for the return of these treasures.

Archbishop Chrysostomos said that he is moved because the return of the precious mosaic is a bright moment and a moment of national emotion and pride. The mosaic will be on display at the Byzantine Museum in Nicosia.

During the ceremony special reference was made to Maria Paphites, an art historian who located the mosaic in 2014 and has helped in the return of looted treasures back home including two icons from Saint Iacovos Church in Turkish occupied Trikomo village.

The Archbishop also praised the work of Andreas Pittas, president of Medochemie and Roys Poyiadjis, a Cypriot businessman, based in New York, who covered the cost of repatriation and restoration.

During the ceremony, the Medal of Apostle Andreas, the highest distinction of the Archbishopric of Cyprus, was awarded to Paphites, Poyiadjis and Pittas for their contribution to the repatriation of the mosaic.

The ceremony concluded with a lecture by Professor Robin Cormack, Professor of Art History at the University of London titled ‘Stolen and Found’.

Cyprus has been divided since the 1974 Turkish invasion. Hundreds of artefacts in the northern Turkish occupied areas have been illegally exported abroad.

By In Cyprus
Previous articleFM to discuss Cyprus problem, bilateral relations, regional issues with Lavrov in Moscow
Next articleThe Natural Bridge of Koraka