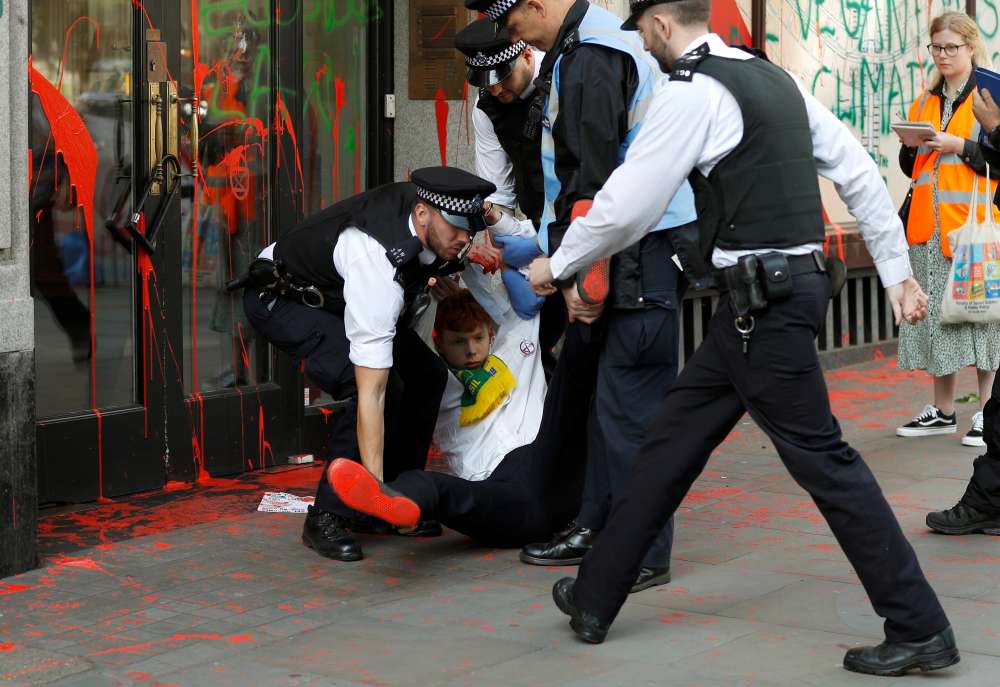 Climate-change protesters threw red paint at the Brazilian embassy in London on Tuesday to demonstrate against damage to the Amazon rainforest and what they described as violence against indigenous tribes living there.

Police arrested six activists from the Extinction Rebellion group after they glued themselves to the embassy windows and climbed onto a glass awning above the entrance.

The protesters had splattered red paint and sprayed red handprints over the facade, along with slogans such as “No More Indigenous Blood” and “For The Wild”.

Brazil contains about 60 percent of the Amazon rainforest, a bulwark against global warming thanks to the vast amounts of carbon dioxide it soaks up and recycles into oxygen.

Far-right President Jair Bolsonaro, who took office in January, has long been sceptical about environmental concerns. He argues that the Amazon is a resource that belongs to Brazil and should be economically developed. He also criticises the existence of protected lands.

Critics say his rhetoric has emboldened loggers, ranchers and informal miners, resulting in a dramatic acceleration of deforestation and in violence against the rainforest’s indigenous inhabitants.

Last week, data from Brazil’s own space research agency showed that deforestation on Brazilian territory had jumped around 67 percent in the first seven months of the year. Bolsonaro has rejected the agency’s data and fired its chief.

A tribal leader was found dead last month near Brazil’s border with French Guiana. Tribe members alleged he was murdered and it was linked to an invasion of their lands by wildcat miners. Bolsonaro said there was no evidence of that.

The United Nations High Commissioner for Human Rights Michelle Bachelet described the death as “a disturbing sympton of the growing problem of encroachment on indigenous land – especially forests – by miners, loggers and farmers in Brazil”.

Extinction Rebellion said the protest in London was timed to coincide with a march by indigenous women in Brasilia on Tuesday, and that similar actions were taking place at Brazilian embassies in Chile, Portugal, France, Switzerland and Spain.

The Brazilian embassy in London said in response to Extinction Rebellion’s actions that it welcomed anyone wishing to establish a dialogue about Brazil’s public policies, but the right to vandalise property did not exist in any country.