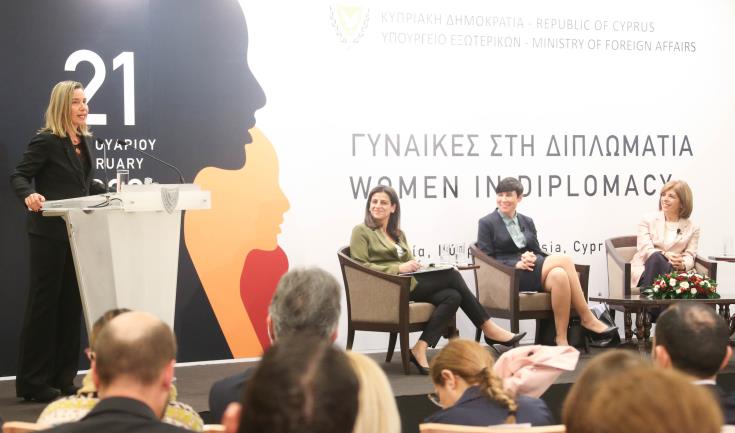 Former top EU diplomat Federica Mogherini, Norwegian Foreign Minister and Cypriot women with leadership positions were among speakers of an event organised by the Ministry of Foreign Affairs in Nicosia to mark the 25th anniversary of the Beijing declaration for women’s rights.

In an address, Foreign Minister Nicos Christodoulides told “Women in Diplomacy” referred to the Ministry`s efforts to include women’s rights into the country’s foreign policy and more specifically to the recent appointment of Gender Equality Advisor Josie Christodoulou.

“GenderEquality should be included and mainstreamed as a horizontal priority in foreign policy. We cannot discuss and implement policies that do not take into account the different needs of women and we can’t do so without women around the table,” Christodoulides said.

“Efforts to mainstream gender in foreign policy of the republic of Cyprus are in effect. We have extended our cooperation with a number of like-minded countries and our long-term aspiration is for Cyprus to become an active player in the formulation of policies on equality between women and men at regional, European and international level,” he added.

The Ministry has drafted a framework of actions, which includes targeted and specific activities towards mainstream gender in foreign policy and had started creating the necessary synergies and collaborations at bilateral and multilateral level, in order to promote gender equality and women’s rights.

“We need more women leadership and more women in diplomacy. We need the inclusion and the utilisation of all the world’s talent so as to say with confidence that the Beijing promise will at last be delivered”, she said.
Foreign Minister of Norway Ine Soreide pointed out that foreign policy and national security were male-dominated areas, when the idea for women was to engage in softer political issues such as family relations and women`s issues.

“We need the participation of women among all domains,” she said before adding that she beeives in strong female participation in absolutely every field.

She also noted that women should be given the confidence to apply for these top jobs.

In her speech she also referred to the practices followed by the Norwegian Foreign Ministry to boost gender equality.
Cypriot EU Commissioner Stella Kyriakides referred to the EU’s commitment to gender equality, saying she was proud to be part of the first team of European Commissioners led by a woman, in the most gender balanced Commission College ever.
She also said that for the first time, there is stand-alone portfolio on equality. At the beginning of March, she also noted, the Commission will adopt a new Gender Equality Strategy for 2020-2024 that will address a number of critical issues that currently undermine equality.

Former High Representative of the European Union for Foreign Affairs and Security Policy Federica Mogherini, shared her experiences as a woman in diplomacy and politics.

As she said, the most common question she was asked was how she could have such a job and at the same time have children.

“They would never ask a man with children the same question”, she said and suggested the increase of paternity leave from day one. That, as she said, would increase women’s participation in diplomacy, but would also help men in family life.
She also spoke for the role of media to transfer the image of women in diplomacy, in order to encourage younger generation and send the message that girls could become everything they want without sacrificing family life.

She also argued that when women are involved in the negotiation table, there are fewer conflicts and it is easier to resolve disputes.

Mogherini also thanked the Cypriot Minister Nikos Christodoulides for this initiative for women, especially in the region of Eastern Mediterranean.