LNG imports for power generation before the end of 2021, says DEFA chairman 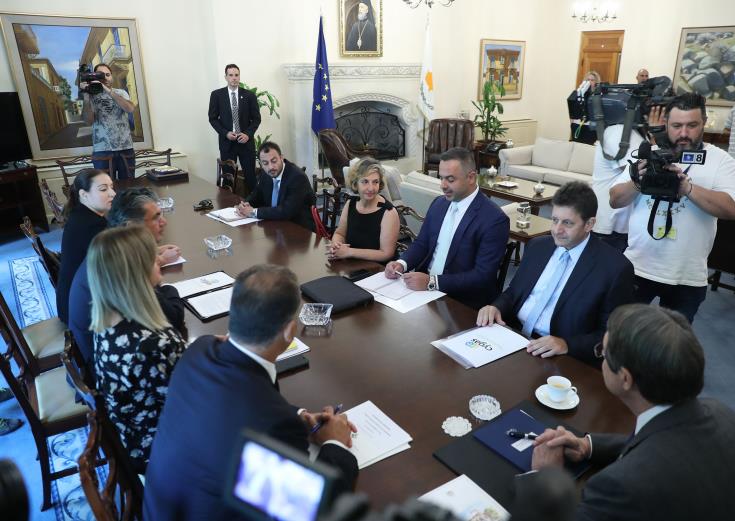 Natural gas imports in Cyprus for power generation are expected to begin before the end of 2021, Natural Gas Public Company (DEFA) Chairman Symeon Kassianides has said.

Accompanied by Energy Minister Georgios Lakkotrypis, Kassianides along with the DEFA board briefed the President of the Republic Nicos Anastasiades over the completion of a tender for the construction of the infrastructure projects to facilitate LNG imports in Cyprus.

“The President expressed satisfaction over the fact that after several efforts for the introduction of LNG, we made a decisive step towards this direction which is significant for the country both for financial and for reasons of energy supply security,” Lakkotrypis said in statements to the press following the meeting.

On his part Kassianides said he was happy to report that a consortium composed of two Chinese companies, two Greek and one Norwegian company have submitted an offer which “could be completed within the timeframe and within the budget provided for the project.”

The tender allows for a period for possible objections by the other participants, he added.

“If everything proceeds well we believe that by mid-October we will be in a position to sign the contract with the successful consortium and to start the course so that between October and December 2021 we could introduce LNG for power generation in Cyprus,” he said.

The projects, Kassianides added, include a floating storage and regasification unit (FSRU), a jetty for mooring the FSRU, a jetty borne gas pipeline and related infrastructure.

He said that the project is not considered as an interim solution but a project of high strategic importance that receives funding from the European Commission, adding that the infrastructure could be used both for LNG imports and exports when Cyprus has natural gas quantities available from its own gas fields.

Replying to a question, Kassianides said the project has an estimated capital expenditure (CAPEX) of €300 million and has secured a grant from the EU amounting to €101 million, while the Electricity Authority of Cyprus will provide €40 million taking a stake in the Cyprus Natural Gas Infrastructure Company, a subsidiary of DEFA.

Kassianides also said that DEFA is in advanced negotiations with the European Investment Bank (EIB) and the European Bank of Reconstruction and Development (EBRD) and other local lenders to secure the remaining financing.

He explained that LNG imports do only concern the EAC, adding that three more companies that have secured licence to construct power plants utilising natural gas, are in discussions with DEFA to provide them with natural gas.

Asked if DEFA has found markets to supply Cyprus with LNG, Kassianides said DEFA has launched a request for expression of interest for LNG supply.

«We have international interest from notable and robust companies of the industry,” he said, adding that after signing the contract for the infrastructure project DEFA will sign by early 2020 the other part of the tender for the medium-term supply of LNG.
(Cyprus News Agency)