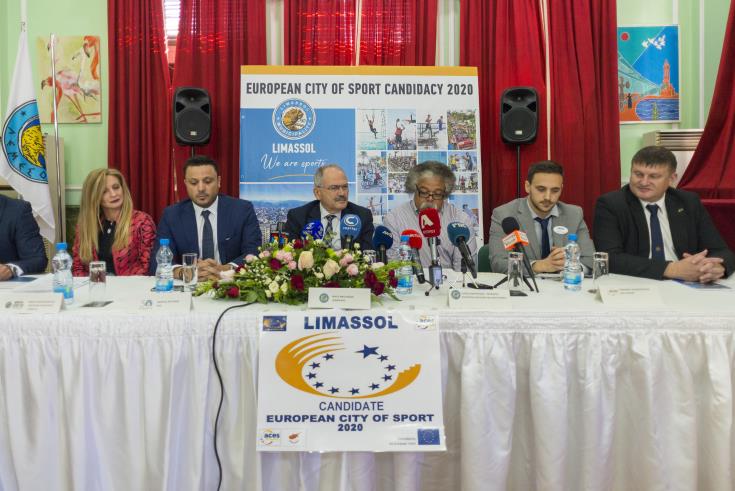 As Limassol on Tuesday presented its candidacy for European City of Sport 2020, spokesman for ACES Europe, Romano Antonopoulos, who attended the press conference, said the town was a very strong candidate.

“What is left now is to tour some of the city’s facilities to see for ourselves the quality of the sports facilities and venues,” he said, adding that what he is interested in is to see that the municipality has vision, strategy and future and so far he can see that from Limassol officials.

He further said that the main criteria for selecting the ACES Europe capital relates to the sporting events being held, locals’ accessibility to sporting facilities, the communication campaigns to promote sport and sport tourism.

ACES Europe representative, Lukas Vorel, said that he saw no reason why Limassol should not be declared the European city of sport of 2020.

Welcoming the representatives of the organization, Mayor Nicos Nikolaides said that competing for the ACES Europe city of sport of 2020 was one of the biggest goals set by his Municipality when the Sports Office was announced and is the first Cypriot city to submit its candidacy.

“The aim of the Municipality is to secure these funds to contribute to the further development of sport in the city,” the Mayor of Limassol added.

According to the ACES Europe website, during the year a town is awarded the title, numerous events bring life to the city. Cities that have been awarded, bequeathed a better future in sports to their citizens, it added.

By In Cyprus
Previous articleSmaller banks should follow bigger ones in reducing NPLs, CBC Governor says
Next article‘Couldn’t believe what I was hearing’: White House aides testify in impeachment probe