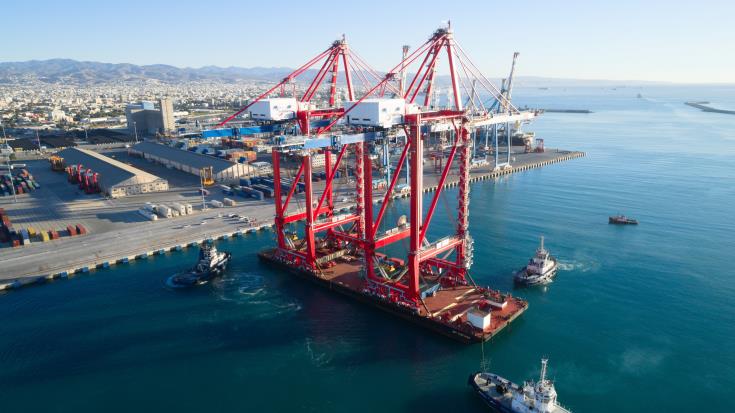 The Limassol port is one of the most advanced ports in the Eastern Mediterranean and constitutes an important source of revenue for Cyprus, President of the Republic Nicos Anastasiades said on Saturday, addressing a ceremony held for the conclusion of the first phase of investments by Eurogate at Limassol Port.

In 2016 the Concession Agreements for the Port were signed and Eurogate was appointed as the Container Terminal Operator, turning “a new page in the history of the Cypriot economy”, as the President noted.

He stressed that “the Agreements do not only provide an important source of revenue for the country, but constitute one of the largest commercialization projects in Cyprus, aiming at upgrading our regional role in the Eastern – Mediterranean as regards tourist, maritime and trade commerce”.

According to the President, this first phase of investments by Eurogate amounted to more than thirty million euros. Two new “Super Post Panamax” cranes, already in operation, as well as 17 new straddle carriers have been purchased, allowing Limassol port to serve the largest container ships and attract transhipment business.

In addition, he said, three older cranes have been upgraded, including equipment passed on by the Cyprus Port Authority. At the same time, the President went on, the company completed a series of construction projects aiming to improve the terminal`s infrastructure, including installing an innovative IT system.

“And I am pleased to assess that the modernisation of the container terminal’s operating systems and infrastructure, as well as the adoption of best international practices, have turned the Limassol port into one of the most advanced ports in the Eastern Mediterranean, with the customers of the port served in a timely and efficient manner”, said President Anastasiades.

The President said that the second investment phase which will cost 32 million euros and it will lead to increasing the terminal’s container handling capacity from 450 thousand containers to one million containers annually.

The President assured of the Government’s continuous support in the company’s future development plans.

By In Cyprus
Previous articleEfforts for resumption of talks to continue provided that Turkey stops its provocations, Nicosia says
Next articleInvestigative journalist put under house arrest in Moscow