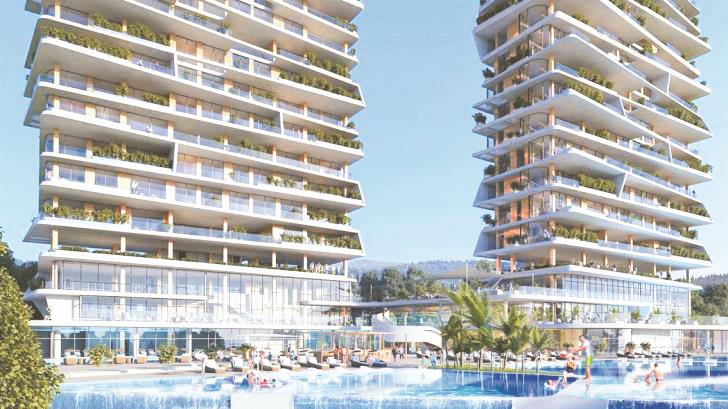 The planning incentives offered the government to boost development has resulted in applications requesting far more floors than is legally permissible, Phileleftheros reported on Saturday.

A recent example is the request by a company to erect two buildings 18 and 16 storeys high in Pyrgos, Limassol in an area where the maximum height allowed is three storeys.

The proposed development will comprise 87 flats in total, outdoor swimming pools, playgrounds for children, a gym and green areas. The company also said that in Block A there will be a communal lounge/reception area while in Block B’s mezzanine floor there will be a library and reading room.

The property is located 500 metres from the beach at 35-40 metres above sea level.

The same company also owns adjacent land that is planned to be used for a hotel or a mixed tourist development, or might even be put up for sale.

As a consultant to the project explained to the Committee for the Environmental Impact Assessment the wider area of the development is primarily used for tourist purposes (hotels, holiday villas) as well as industrial (power station), mentioning also that there is already a multi-storey construction underway just east of the proposed development.

A representative of the Geological Survey Department  expressed a positive opinion, pointing however to the fact that for buildings of 13 storeys and above an extensive geological survey needs to be conducted as per the proposal of the ad-hoc committee on large-scale development and high-rises. The same committed to release the opinion of the Geological Survey Department on the geological study.

A representative of the Town Planning Department also supported the plans given that the appropriate terms are prescribed. The same person has made public that the department is looking into a derogation application for the proposed development as there are plans to erect grouped holiday residences as per the provisions of the respective local plan. They explained that the plan would release green spaces that would benefit the area.

A representative of the Forestry Department appears sceptical towards the project due to the lack of opinion by the Geological Survey Department as well as lack of spatial planning. They also expressed concerns on the dividing the work into two phases.

President of the Pyrgos Community Council Andreas Spyrou said that he does not object to multi-storey buildings given the wider emergence of multiple high-rises in the area.

The President of the Cyprus Scientific and Technical Chamber requested the submission of a traffic impact study and also posed queries as its Energy Performance Certificate.  He also advised that the opinion of the Chamber will be transmitted in writing.

On behalf of the Cyprus Federation of Environmental Organisations, Myroulla Hadjichristoforou stands against the project as a matter of principle because strategic and spatial studies for high-rises have not been conducted, emphasising that this is a matter that concerns the whole of Cyprus.

She also cited reasons of incompatibility of planning zones and negative impact to Limassol’s marine environment in the near future, adding that the geological substrate of the Limassol and Larnaca coastal areas cannot support more high-rises.