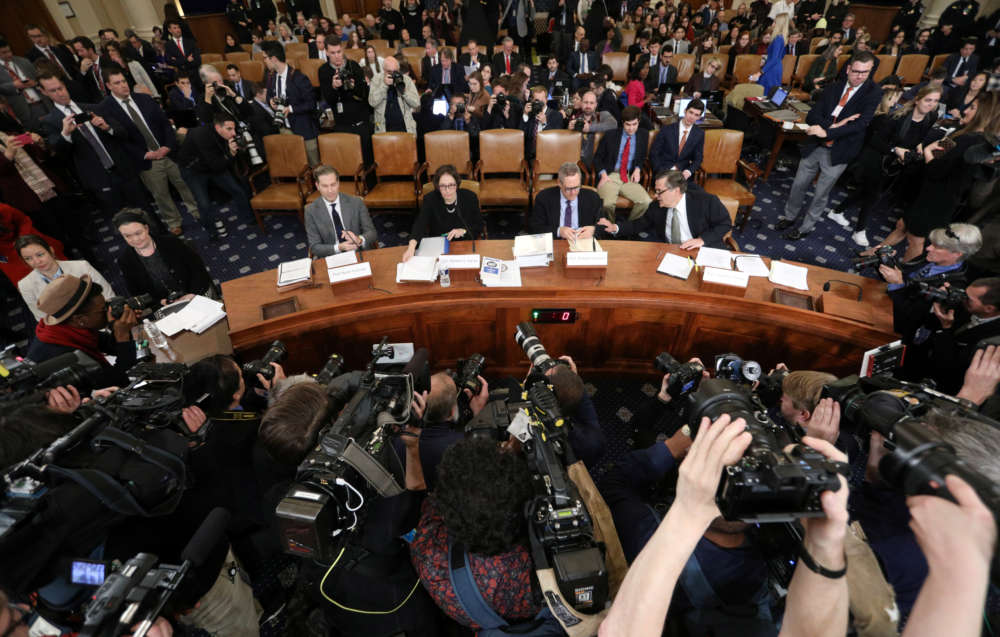 Three legal experts told U.S. lawmakers on Wednesday that President Donald Trump’s efforts to pressure Ukraine to investigate a political rival amounted to impeachable offences, in a hearing that laid the groundwork for formal charges to be filed against the president.

Democrats on the House of Representatives Judiciary Committee said they may look beyond Trump’s relations with Ukraine as they draw up articles of impeachment, to include his earlier efforts to impede former Special Counsel Robert Mueller’s investigation of his campaign’s relations with Russia

The impeachment inquiry, launched in September, focuses on Trump’s request that Ukraine conduct investigations that could harm political rival Joe Biden, a leading contender for the Democratic 2020 presidential nomination.

The hearing on Wednesday was the committee’s first to examine whether Trump’s actions qualify as “high crimes and misdemeanours” punishable by impeachment under the U.S. Constitution.

Three law professors chosen by the Democrats made clear during the lengthy session that they believed Trump’s actions constituted impeachable offences.

“If what we’re talking about is not impeachable, then nothing is impeachable,” said University of North Carolina law professor Michael Gerhardt.

But George Washington University law professor Jonathan Turley, who was invited by the Republicans, said he did not see clear evidence of illegal conduct. He said the inquiry was moving too quickly and lacked testimony from people with direct knowledge of the relevant events.

“One can oppose President Trump’s policies or actions but still conclude that the current legal case for impeachment is not just woefully inadequate, but in some respects, dangerous, as the basis for the impeachment of an American president,” said Turley, who added that he did not vote for Trump.

In London for a NATO meeting, he called a report by House Democrats released on Tuesday that laid out possible grounds for impeachment a “joke” and appeared to question the patriotism of the Democrats, asking: “Do they in fact love our country?”

Democrats who control the House may vote by the end of the year on impeachment charges that could include abuse of power, bribery, obstruction of Congress and obstruction of justice. Lawmakers say no decision has been made at this point.

Democratic aides said Trump’s efforts to pressure Ukraine echoed his attempts to impede Mueller’s investigation. Both episodes, they said, demonstrated a pattern of behavior by which Trump invited foreign governments to interfere in U.S. elections and obstructed investigations into his actions.

But they stopped short of saying it could form the basis for a separate article of impeachment.

Moderate Democrats might not back that approach. “We have been taking the country down this road on this very targeted issue of Ukraine,” said Democratic Representative Elissa Slotkin, who won a Republican-controlled seat in Michigan last year. “And that’s what I think we should focus on.”

If the House votes to impeach Trump, the Republican-controlled Senate would have to vote on whether to remove him from power. Republicans in both chambers have stuck with the president, blasting the impeachment effort as an attempt to undo his surprise victory in the 2016 election.

“The evidence against the president is really about policy differences,” said Representative Doug Collins, the committee’s top Republican.

The inquiry’s focus is a July 25 telephone call in which Trump asked Ukrainian President Volodymyr Zelenskiy to open an investigation into Biden and his son Hunter Biden and into a discredited theory that Ukraine, not Russia, meddled in the 2016 U.S. election.

Hunter Biden had joined the board of Ukrainian energy company Burisma while his father was U.S. vice president. Trump has accused the Bidens of corruption without offering evidence. They have denied wrongdoing.

Democrats have accused Trump of abusing his power by withholding $391 million in security aid to Ukraine – a U.S. ally facing Russian aggression – to pressure Zelenskiy to announce that he was investigating Biden and the 2016 election.

Trump has instructed current and former members of his administration not to testify or produce documents, leading senior officials like Secretary of State Mike Pompeo to defy House subpoenas.

Republicans focused their questions on Turley, who largely backed up their view that Democrats had not made the case for impeachment – although he did say that leveraging U.S. military aid to investigate a political opponent “if proven, can be an impeachable offense.”

Karlan drew a sharp response from Republicans for a remark about how Trump did not enjoy the unlimited power of a king.

“While the president can name his son Barron, he can’t make him a baron,” she said.

Karlan later apologized for the remark.

No president has ever been removed from office through impeachment, although Republican Richard Nixon resigned in 1974 after the House began the impeachment process in the Watergate corruption scandal. Two other presidents – Andrew Johnson and Bill Clinton – were impeached by the House but acquitted by the Senate.

The committee could soon recommend articles of impeachment against Trump, setting up a possible vote by the full House before Christmas, followed by a Senate trial in January.

By In Cyprus
Previous articleU.S. Navy sailor kills two in shooting at Pearl Harbour base, takes own life
Next articleFirst screening of Jiu Jitsu film shot in Cyprus