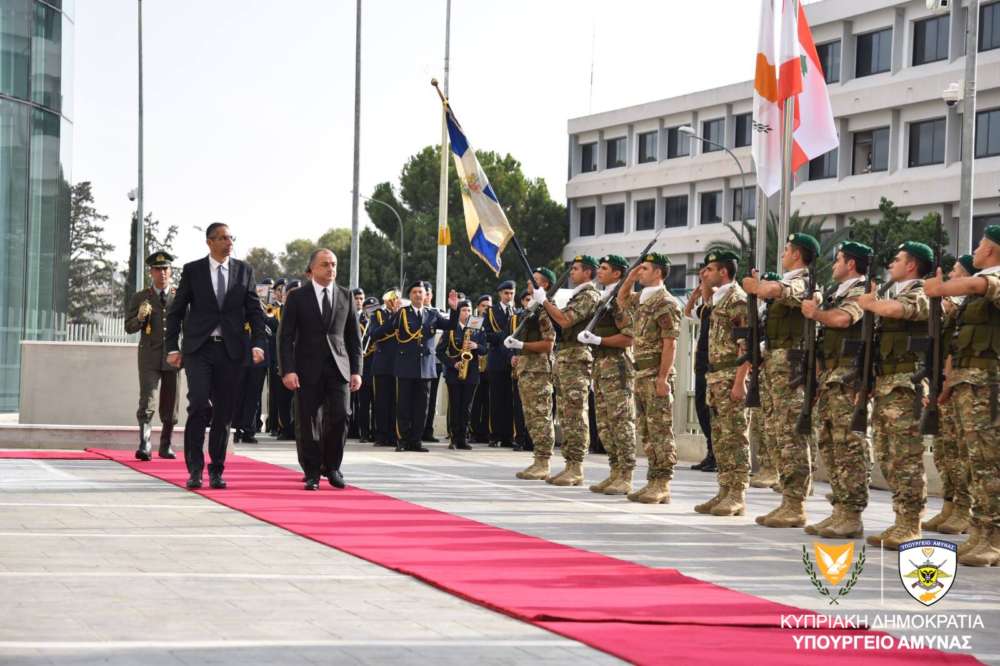 Lebanon has expressed support towards Cyprus as regards Turkey’s provocations in its exclusive economic zone. The issue was discussed by Defence Minister Savvas Angelides on Tuesday with  Elias Bou Saab, the Lebanese Minister of National Defence, who is paying Cyprus a visit.

Saab said that his country understands the Cypriot position and supports the government in all its activities “because Cyprus is always interested in resolving these issues in a peaceful and legal way, and this is what we believe as well”.

As regards the situation in Syria he spoke of a Turkish invasion, adding that the entire Arab League has condemned the activity of Turkey in the northern Syria. “We stand by the same position that this is considered invasion and will create instability in the region. We should work with all our friends, the EU and anybody else around the world, to stop this activity because many civilians are paying the prize,” he added.

He also said that he had the opportunity to talk with his Cypriot counterpart about the refugee crisis which affects both Lebanon and Cyprus. “We spoke about a way to coordinate our actions because many times even the navy in Lebanon has stopped some of the illegal immigrants that were trying to come to Cyprus,” he said.

Saab said they also spoke of the fires in Lebanon and the assistance from Cyprus which has send aircraft. “We are very grateful for the support you giving us in a very fast and effective way. Your planes are now fighting fires in Lebanon, so I want to thank the Government the Cypriot people for standing next to Lebanon in this crisis,” he said.

With the MoD of Lebanon @EliasBouSaab we have decided the enhancement of our cooperation in the fields of defence, search&rescue and illegal migration. Lebanon has condemned Turkey’s invation in Syria and in the EEZ of Cyprus.#Cyprus shows effectively its assistance to #Lebanon. pic.twitter.com/kXJYxi4rAc

On the agenda was also the issue of sharing  information so that both countries can closely work together for the peace, security and safety.

Angelides said that Saab’s presence proves Cyprus’ determination to further strengthen and deepen the bilateral relations in the fields of security and defence.

“We had the opportunity to discuss issues of common interest such as the current security situation in Syria, the situation in the Eastern Mediterranean region and the geopolitical environment. We also discussed specific measures to address terrorism and new asymmetric threats as well as ways of dealing with the consequences of the migration crisis, ” he added.

Angelides said that both countries follow the situation in Syria closely. “I believe is very dangerous situation for the Syrian people, for the fight against terrorism, but also it puts in danger the fragile stability of the region,” the Minister said.

He added that Cyprus express its solidarity to Lebanon on its efforts to address the many challenges it faces and to this end Cyprus has already provided practical assistance in various fields.

“Cyprus and Lebanon maintain long standing relations of sincere friendship, mutual respect, as well as common struggles for a better, safe and peaceful future for the wider region of the Eastern Mediterranean. In this context, the Republic of Cyprus undertaking initiatives, as a member of the EU and country familiar with the particularities of the region, in order to contribute in a constructive manner with the creation of conditions of peace, stability and prosperity, ” Angelides pointed out.

Angelides also said that he briefed his counterpart on the latest development concerning the Cyprus issue and the ongoing illegal operation of Turkey in the EEZ of Cyprus.

They also discussed the devastating fires in Lebanon and according to Angelides, Saab expressed his gratitude for the valuable help extended by the Republic of Cyprus with the two aircrafts of the forest department.

“We both agree on the need to further strengthen our cooperation also in this important area of natural disasters and emergencies,” he said.