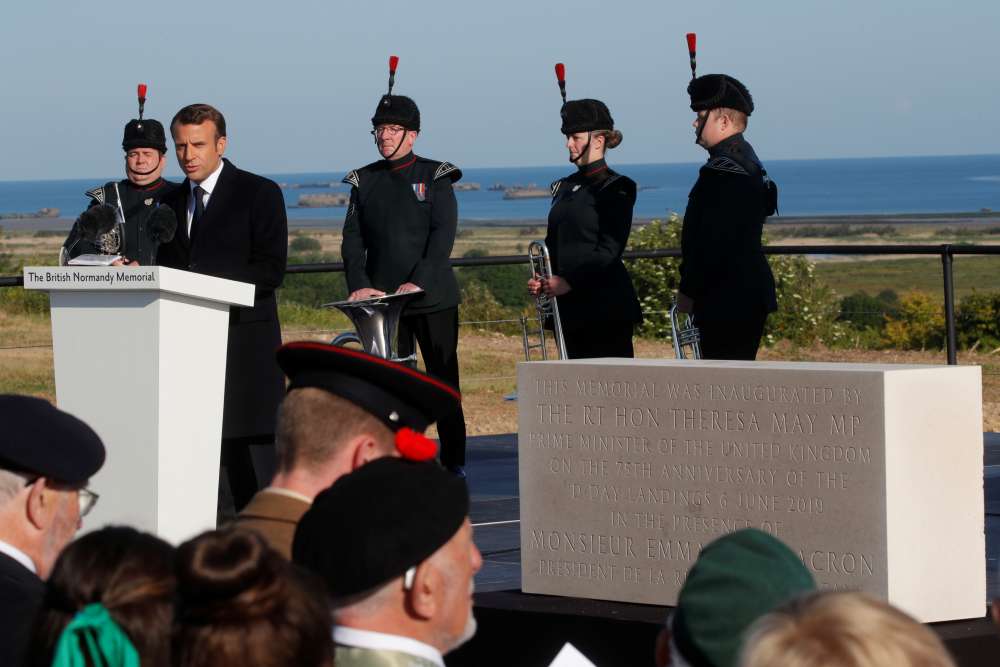 A lone piper playing atop the remnants of an artificial harbour on the Normandy coast on Thursday marked the hour the first British soldier landed in France 75 years ago on D-Day, the allied invasion that would turn the tide of World War Two.

Western leaders and ageing veterans from Britain, the United States and Canada will gather at events along the 80-km stretch of coastline in northern France, where more than 150,000 troops landed on June 6, 1944, under a hail of German artillery and machine-gun fire.

Thousands died on each side during D-Day, the largest seaborne invasion in history that paved the way for western Europe’s liberation from Hitler’s forces.

On the eve of the anniversary, Macron evoked the spirit of D-Day to speak of the modern need for multilateralism and international cooperation, an area where the United States and its European allies have been increasingly at odds during Trump’s administration.

“These allied forces that together freed us from the German yoke, and from tyranny, are the same ones that were able to build the existing multilateral structures after World War Two,” Macron told reporters after an event in Normandy to honour the French Resistance.

“We must not repeat history, and remind ourselves what was built on the basis of the war.”

Under blue skies, the piper played Highland Laddie on a giant concrete slab that formed part of the Mulberry harbour in the waters off Arromanches, constructed to enable the resupplying of allied troops as the pushed the Germans back.

Restored wartime jeeps and amphibious vehicles lined the beach as British and American flags fluttered in the breeze.

The Normandy landings were months in the planning and kept secret from Nazi Germany despite a huge trans-Atlantic mobilisation of industry and manpower.

Under the cover of dark, thousands of Allied paratroopers jumped behind Germany’s coastal defences. Then, as day broke, warships pounded German positions before hundreds of landing craft disgorged the infantry troops.

Tens of thousands perished on the beaches – codenamed Gold, Juno, Sword, Utah and Omaha by the Allies – and the months-long battle that followed in Normandy.

Lines of white marble crosses on the clifftop above Omaha Beach today mark the resting place of more than 9,380 U.S. soldiers who died during the fighting.

Here, Trump will watch Macron award the Legion d’Honneur, France’s highest award for merit, to five U.S. veterans before the two presidents leave for a working lunch in nearby Caen.

Khaki parachutes filled the skies above Sannerville on Wednesday afternoon as two British veterans in the mid-nineties joined several hundred paratroopers re-enacting the jumps behind enemy lines. Hundreds of British veterans crossed the English Channel on a specially chartered ferry.

Earlier, on the south coast of England, Britain’s Queen Elizabeth led presidents and prime ministers on Wednesday in paying tribute to surviving D-Day veterans and their fallen comrades.

“The heroism, courage and sacrifice of those who lost their lives will never be forgotten,” the 93-year-old monarch said. “It is with humility and pleasure, on behalf of the entire country – indeed the whole free world – that I say to you all: thank you.”

German Chancellor Angela Merkel praised the sacrifice of tens of thousands of soldiers. “That I, as German chancellor, can be here today, that today we stand together for peace and freedom, is a gift from history that must be cared for and protected,” she said.

Trump read a prayer spoken by Franklin D. Roosevelt in 1944, capping a three-day state visit to Britain where he had lavished praise on the U.S. ally and said wartime bonds forged the “greatest alliance the world has ever known”.

Trump’s forthright diplomacy and “America First” policy have, however, shaken the NATO alliance and tested relations with erstwhile allies including Britain and France.

Amid the D-Day ceremonies, Russia told the West that the Allied war effort should not be exaggerated and that Allied victory would not have come without the Soviet Union’s “titanic effort”.