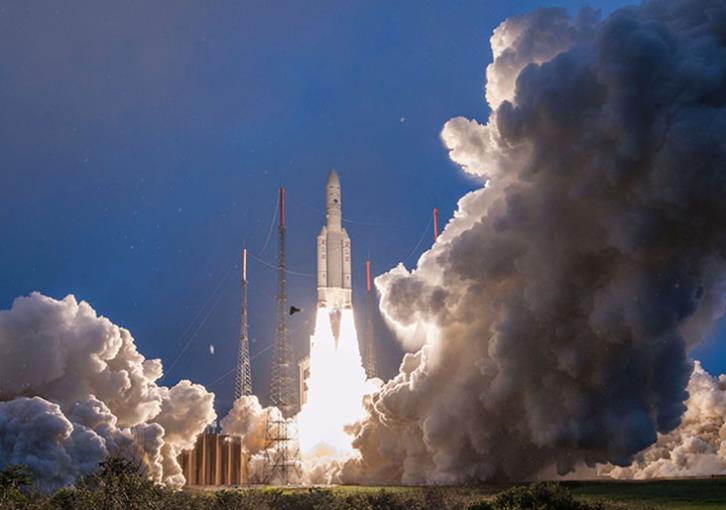 The launch of Hellas Sat 4 communication satellite opens a new chapter in the space history  for Cyprus and Greece, Minister of Communications Vassiliki Anastasiadou has said from the Kourou Space Centre in French Guiana, where Hellas Sat 4 successfully launched last night.

The Minister referred to the geopolitical, technological and commercial benefits that Hellas Sat 4 has to offer, and added that “we are proud to see the flags of the two countries accompany the satellite in its space orbit.”

Anastasiadou noted that the launch of Hellas Sat 3 in June 2017 and of  Hellas Sat 4 expand and diversify the existing satellite coverage of the company by providing more satellite capacity in Europe, the Middle East and Africa.

The Minister said that this is important as well for strengthening Cyprus as an attractive satellite communications centre, contributing to the achievement of the long-term policy goal, which is to turn Cyprus into a regional service centre in the field of telecommunications services.

She pointed out that the presence of Hellas Sat in Cyprus since 2001, when Cyprus and Greece jointly licensed the company, is an important step forward in strengthening our position as a successful regional satellite communications centre. This agreement put Cyprus on the global satellite map.

Concluding, she thanked Hellas-Sat CEO, Christodoulos Protopapas, and all who worked tirelessly for this launch. She pledged that the Ministry will remain committed to support and facilitate the activities of satellite providers in Cyprus.

Arianespace CEO Stéphane Israël confirmed the success in post-launch comments from the Spaceport’s Jupiter control room. “For the first Ariane 5 launch of the year, our heavyweight vehicle has once more performed flawlessly,” he said. “Congratulations to all!”

“Deployed first in the flight sequence 27 minutes after liftoff, HS-4/SGS-1 is a geostationary “condosat” for Saudi Arabia’s King Abdulaziz City for Science and Technology (KACST) and Greek-Cypriot satellite operator Hellas Sat, an Arabsat subsidiary. Designed, assembled and integrated by Lockheed Martin Space, HS-4/SGS-1 will operate from an orbital position of 39 deg. East, with a coverage area that includes Europe, South Africa and the Middle East” Arianespace says.