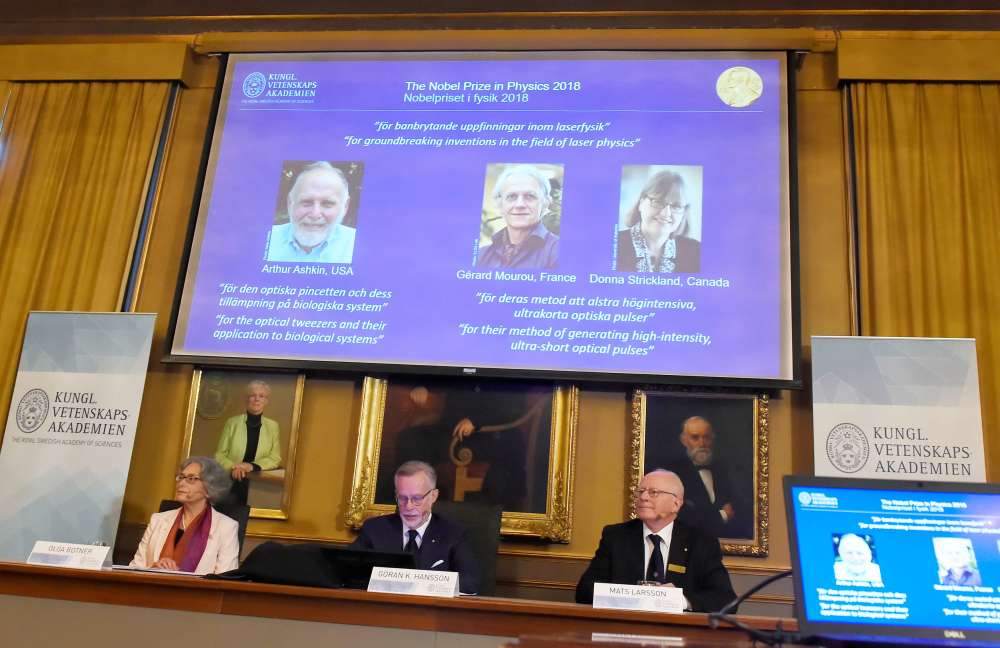 Scientists Arthur Ashkin, Gerard Mourou and Donna Strickland won the 2018 Nobel Prize for Physics for breakthroughs in the field of lasers used for surgery as well as scientific study, the award-giving body said on Tuesday.

American Ashkin of Bell Laboratories in the United States won half of the prize while Frenchman Mourou, who also has U.S. citizenship, and Canadian Strickland shared the other half.

Strickland, of the University of Waterloo, Canada, becomes only the third woman to win a Nobel prize for physics.

“The inventions being honored this year have revolutionized laser physics,” the Royal Swedish Academy of Sciences said on awarding the nine million Swedish crown ($1 million) prize.

“Advanced precision instruments are opening up unexplored areas of research and a multitude of industrial and medical applications,” it said in a statement.

Ashkin invented optical “tweezers” that could grab particles, atoms, viruses and other living cells while Mourou and Strickland separately created the shortest and most powerful laser pulses ever.

These became the standard for high-intensity lasers, for example used in millions of corrective eye surgeries per year.

The prizes for achievements in science, literature and peace have been awarded since 1901 in accordance with the will of Swedish business tycoon Alfred Nobel, whose discovery of dynamite generated a vast fortune used to fund the prize.

However, for the first time in decades no Nobel Prize for literature will be given this year after a scandal over sexual misconduct allegations saw a string of members leave the board of the Swedish Academy that awards it.