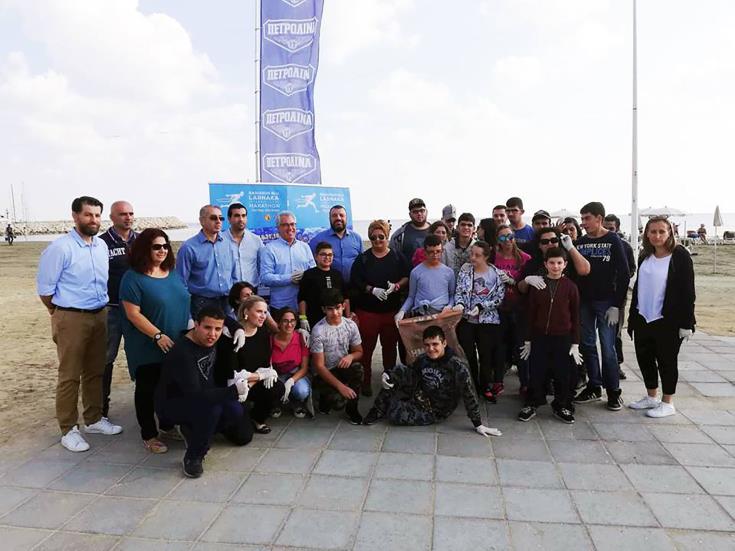 A large part of the Finikoudes beach in Larnaka was cleaned on Monday from rubbish in the context of the “green” international Larnaka marathon.

“A cleaning of the Finikoudes beach took place in cooperation with the Larnaka municipality as part of an important and at the same time symbolic move on which the organising committee of the Larnaka Marathon pays particular importance,” a press release issued by the organisers said.

Commissioners for the Environment and Volunteerism, the Cyprus Sports Organisation, Let’s Do It Cyprus, students from the Ayios Syridonas Special School in Larnaka and many volunteers participated.

Larnaka Mayor, Andreas Vyras, said that the “marathon is not authentic just on its racing part, but also concerning a series of actions which have to do with a modern city.”

“Apart from sport, the marathon also covers other important matters such as environmental issues, cleanliness issues, protection of the natural environment and issues which if overlooked would endanger not just our city but also the entire planet,” he added.

Volunteer Commissioner Giannis Giannaki said that “the importance of a marathon is huge not just for sports, but also for philanthropy, volunteerism and the environment. Today’s initiative is beautiful and it strengthens the volunteerism culture, since it takes place with citizens contribution and helps us to understand that the environment and quality of life are not irrelevant the one from the other,” he added.

In such a race, she explained, there is a code of practice and procedures which should be followed. “We would like to convey the message for anyone organising such events that they should follow this example,” she said.

Cyprus University of Technology (CUT) Costas Andreou spoke of the plan for green sports events in Cyprus which has been prepared by the Environment Commissioner and said that “such events have a positive impact on our society.” We cooperate with all relevant actors in order to promote such actions and to show that we are interested about what happens in such events with the waste, the noise, the pollution, since the aim is that the impact on the city is a positive one,” he noted.

On behalf of the Cyprus Sports Organisation (CSO) Tasos Prokopiou said that “in the context of its actions, CSO supports the first ‘green’ marathon in many ways, while we are at the final stage before publishing a cleanliness code for sports events.”

Executive Director of the Radisson Blu international Larnaka Marathon, Costas Daltas, referred to the actions which have to do with the “green” marathon. “The environment is a priority for us. Cleaning up with the students of Ayios Spyridonas Special School is symbolic,” he said.

Since last year, he added, “we have prepared a comprehensive environmental plan of action which includes the separation of waste, a specific parking and transport plan, a collection of sports clothes, shoes and bags from recyclable materials.”

By In Cyprus
Previous articleStan Lee, creator of Spider-Man and other Marvel superheroes, dead at 95
Next article117 minors involved in drug cases