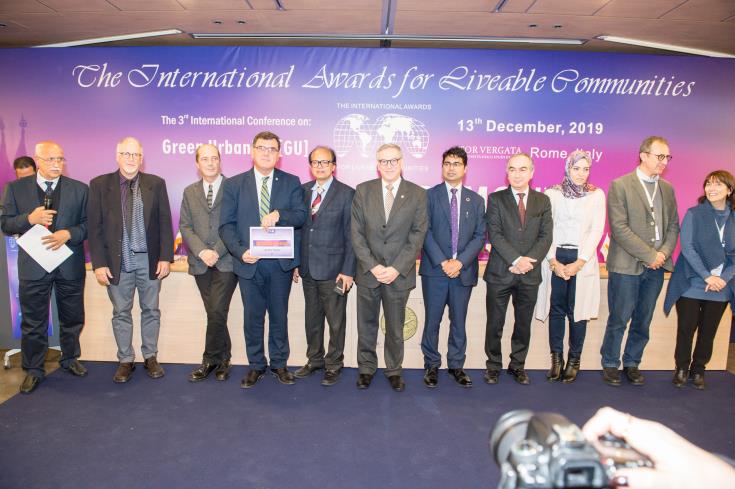 Larnaca has been awarded third place in the “The International Awards for Livable Communities 2019” (The LivCom Awards), that were held in Rome last week.

More than 120 cities from around the world took part of which 22 qualified for the finals in Rome.

Cities that made it to the finals include Lisbon, Vienna, Bergen, Beijing and Tirana, the municipality said in a written announcement.

Each town had 50 minutes to present its proposal to a three member panel. Larnaca’s bid was submitted by deputy mayor Iason Iasonides and municipal engineer Andreas Karakatsanis.

There were six criteria: enhancement of the landscapes and public spaces, the arts, culture and heritage management, traditional environmental protection and the green economy, community participation and empowerment, healthy lifestyle and sustainable planning and management policies

Larnaca shared third prize with two other towns in the category of cities with a population of 20,000 to 75,000. the first prize went to Agueda in Portugal. No second prize was awarded.

Larnaca Municipality said the award was an honour for the town and reflects the efforts of the mayor and the municipal council to improve the quality of life of residents and visitors.

The LivCom Awards were launched in 1997 and is the World’s only Awards Competition focusing on International Best Practice regarding the management of the local environment. The objective of LivCom is to develop and share International Best Practice, with the further objective of improving the quality of life of individual citizens through the creation of ‘liveable communities’. Since 2007 UNEP has collaborated with the LivCom Awards, when a Memorandum of Understanding was signed between the two Organisations.

The LivCom Awards is managed by a UK Registered Company that is Limited by Guarantee and is a non profit distributing Company. The LivCom Management Company is a UK Registered Charity. LivCom is non-political, embracing all nations and cultures.

By In Cyprus
Previous articleWe have no alternative but peace, President Anastasiades tells Akinci
Next articleLimassol: Worker buried by mound of earth