The parents association of the Vergina Lyceum in Larnaca circulated a letter on Monday with photos of limestone slabs covering the external walls of the school in danger of collapsing, despite upgrading works taking place last year.

According to the announcement, the slabs are situated at a height of more than 6 metres and run across the exteriors of the entire school, posing a serious risk to pupils and staff.

The issue was reportedly first raised during a visit to the school by Education minister Prodromos Prodromou on February 17 together with the ministry’s head of technical services Andreas Marangos. Commitments were made on the day of imminent repairs to the building as it was a matter of health and safety.

A letter followed on February 20 branded “URGENT” sent by the headmaster’s office to the Larnaca district school authority, also shared with the head of secondary schools and the competent office on health and safety, sounding the alarm on the dangerous construction, but parents say that no response was received.

Pictured: Limestone slabs in bad shape at risk of collapsing.

A second letter to the Larnaca schools authority was sent by the parents association on February 27 that was also circulated to the Ministry of Education was again met with silence, the announcement added. The letter reminded of the pressing slabs issue and also mentioned other necessary maintenance required at the school. 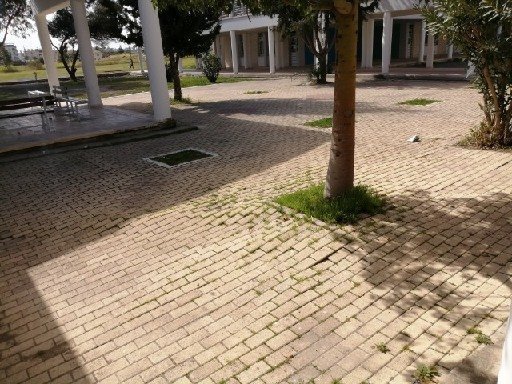 Pictured: Protruding tiles in the schoolyard prompting fears of tripping accidents during recess.

The letter concludes that given the urgency of the situation, and having no other alternatives left, the school’s parents association has decided to take measures starting Monday, March 9, “which will gradually escalate until the final resolution of the problem, in hope that no fatal accidents occur until then.

“Our only aim is to ensure the safety of 480 children, 70 teachers, the school’s staff and students of the evening gymnasium and lyceum,” the parents said.

Pictured: A wall at Vergina Lyceum in bad condition, despite reported maintenance in 2019.