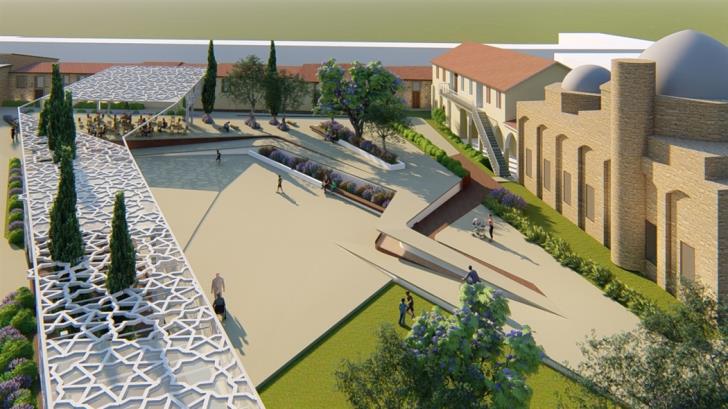 One of the most important works constructed in Larnaca during the Ottoman occupation for the benefit of the Turkish-Cypriot community was Zouhouri Square, also known as the former Turkish-Cypriot market.

The name of the square originates from the area’s mosque of the same name. The Municipality’s announcement of the “regeneration of the yard and part restoration of the Zouhouri complex” is a project expected to reshape the landscape of this historic location in the Larnaca city centre.

According to Larnaca municipal council member Michalakis Mallas, the former Turkish-Cypriot market comprised shops and small businesses belonging to Turkish-Cypriots and was built during the early years of Ottoman rule in Cyprus, and was undoubtedly a great contributor to the local economy.

After the Turkish-Cypriot residents of Larnaca vacated the city in the 1974 Turkish invasion, the Zouhouri Square market became home to Greek-Cypriot businesses. The new occupants of the shops and square — carpenters, mechanics, blacksmiths etc —  were Greek-Cypriot refugees that had found temporary shelter there.

In recent years, as business owners gradually moved out, the area fell into decay.

Larnaca mayor Andreas Vyras said that the rejuvenation project will be mainly funded by the EU Structural and Investment Funds and is the sixth and last project of the 2014-2020 period.

The project is coordinated by the Larnaca Municipality, the Cyprus government and the competent European authorities and will cost approximately  €2,9 million.

According to Vyras, the scope of the works is, in addition to the yard and former Turkish-Cypriot market, the restoration of the guesthouse, the landscaping of the area with the addition of lights, and the conservation of the facades of all the structures facing the yard.

The mayor added that the aim of the project is to aesthetically and operationally improve the Zouhouri area, mentioning that the new square will be able to host events too.

The upgrading works will also bring out the historic character of the city by forming a liaison between the landmarks in the city centre for the benefit of the locals as well as visitors.

“Imagine a Larnaca which in less than two years will have a reconstructed centre starting from Ermou Square reaching all the way to Piale Pasha. Combined with the Municipal Market and castle square works already underway, we will have a whole new city,” the mayor said.

The tender announcement was published last Wednesday by the municipal authorities and execution is anticipated to start in spring, with works predicted to last 18 months.

In preparation of the upcoming building works at Zouhouri Square, the Municipality is planning to move the Saturday morning outdoor market in the coming weeks to a temporary location that is yet to be decided.