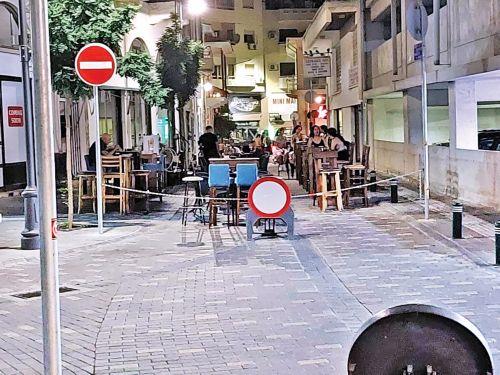 Mayor of Larnaca Andreas Vyras has enforced additional safety regulations in the town’s popular Laiki Gitonia, according to Philenews.

The order came one day after a man almost died due to safety violations by restaurant and cafe business owners taking up road space with improperly-placed chairs and tables.

Vyras asked for stricter implementation of safety measures which are already under effect in the area.

The incident was reported last week by Phileleftheros, in which an elderly man had a heart attack and was carried away by an ambulance.

As reported by witnesses, the chairs and tables were clearly placed outside the area which was allowed to each establishment.

The ambulance eventually managed to transport the man to the hospital, but Mayor Andreas Vyras remained annoyed with the situation.

Vyras made reference to other streets which are often blocked by space occupied by establishments, such as Watkins Street and Kleanthis Kalogera Street.

However, the municipality is trying to alleviate the situation by enforcing exemptions for ambulance and fire vehicles to pass through such streets.

As well as by indicating the square footage allowed to each establishment for setting up chairs and tables.

By Annie Charalambous
Previous articlePolice file on boy dying shortly after Covid jab fake news to be sent to Law Office
Next articleHealth Ministry: 72.3% of adults, over 25% of 16-17 year-old fully vaccinated