Largest shipment of humanitarian aid for Lebanon departs on Friday 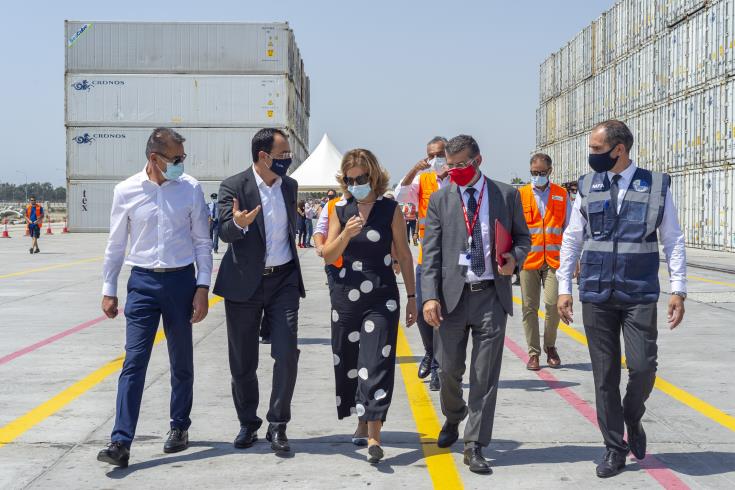 Cyprus’ Minister of Foreign Affairs Nikos Christodoulides and Ambassador of Lebanon in Nicosia Claude El Hajal reaffirmed the close ties between their two countries on Friday, just hours before the third and largest shipment of humanitarian aid to Lebanon – after the deadly and devastating blast at Beirut Port in early August – sailed out of Limassol Port for Beirut.

A total of 20 containers with food and two with medical supplies have been loaded onto a commercial ship at Limassol Port.

Together with the previous two shipments, the humanitarian aid to Lebanon is the largest ever sent abroad by Cyprus.

Speaking at Limassol Port, Christodoulides said Cyprus responded to calls immediately with two helicopters and a ten-member mission of rescue personnel, as well as 6.5 tonnes of medical supplies and food, followed by another shipment of 70 tonnes of food, medical supplies and clothing, and a three-member team of volunteer doctors.

Furthermore, he said, the Ministry of Foreign Affairs is in contact with the Embassy of Lebanon in Nicosia to find the best way to allocate the €5 million announced by the government for immediate humanitarian relief.

“In a few hours, the commercial ship carrying the third and largest part of the humanitarian aid gathered so far will sail for Lebanon, with over 200 tonnes of medicines and food”, Christodoulides said.

Claude El Hajal said “it is at times like these that we know our true friends”, adding that “Lebanon is passing through difficult times”.

“We felt from the beginning – since the 4th of August when the blast hit the port of Beirut – the generosity and the sympathy and the support of Cyprus, the government of Cyprus and the people of Cyprus. In Lebanon we appreciate this lot”, she said.

El Hajal noted that “the strong relationship between Cyprus and Lebanon has been throughout the years, it is an age-old relationship”.

“It is this act of generosity that we are witnessing these days that prove that we are not only neighbours, we are brothers, and we know that Cyprus will always stand by Lebanon and will always help Lebanon. I want to thank everybody, all the people, all the NGO’s, Mr. Yiannakis, Aramex, Mr. Moustafa, for all your help and support and I am sure we will rise from this crisis”, she added.

El Hajal also said “we have been through many problems, through many challenges, but I think this one is the most difficult, but with the resilience of the Lebanese people I am sure that we will overcome this, and with the help of our friends and the international community”.