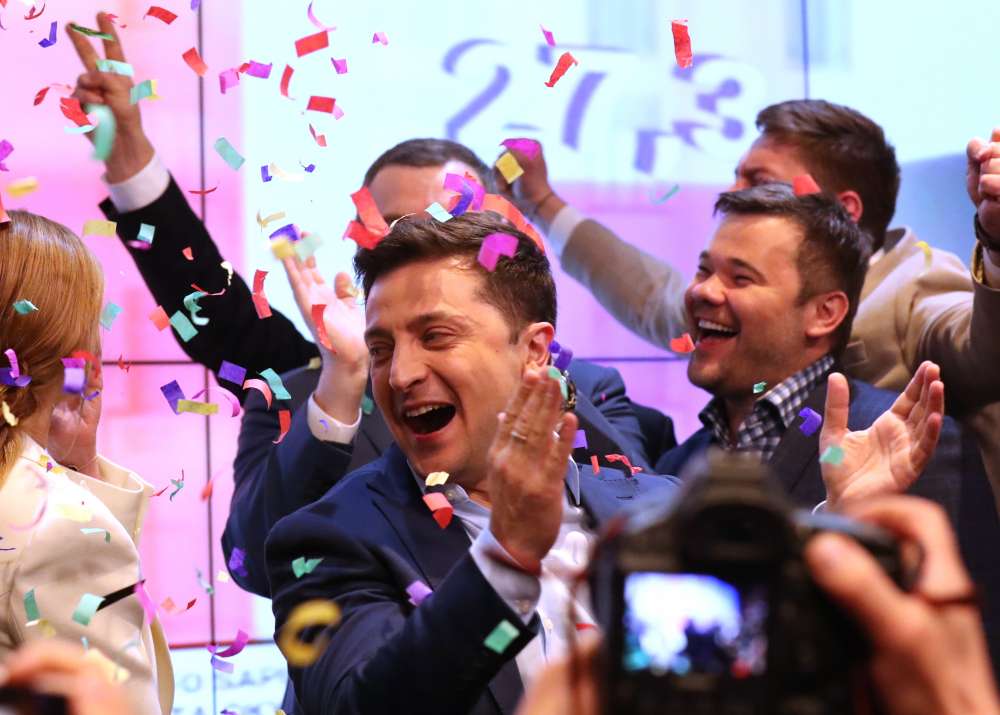 In a popular Ukrainian TV series, comedian Volodymyr Zelenskiy played a president who is scrupulously honest and outwits crooked lawmakers and shadowy businessmen who try to stand in his way.

Zelenskiy’s character in the show “Servant of the People” was loved by Ukrainians fed up with how their country had been governed since independence in 1991.

On Sunday, they turned fantasy into reality after voters elected Zelenskiy by a landslide, according to exit polls, thrusting an actor with no prior political experience and few detailed policies into the presidency of a country at war.

Zelenskiy’s sudden rise comes at a time voters around the world have upended the status quo, propelling anti-establishment forces such as U.S. President Donald Trump and Italy’s 5-Star Movement, which was also once led by a comedian, to power.

His victory reflected voters’ frustration with politics as usual. Just 9 percent of Ukrainians trust their national government, the lowest of any electorate in the world, a Gallup poll in March showed.

Critics question Zelenskiy’s political inexperience and he remains something of an unknown quantity for investors who want reassurances that he will accelerate reforms and keep Ukraine in an International Monetary Fund programme.

Zelenskiy’s unorthodox campaign put the incumbent President Petro Poroshenko on the backfoot right from the start.

He announced his bid for the presidency on New Year’s Eve, upstaging Poroshenko who was giving a traditional televised address to the nation.

Eschewing traditional rallies, his campaign relied heavily on quirky social media posts to his millions of online followers, jokey posters, comedy gigs and winking allusions to the fictional president he portrays on screen.

He traded insults and accusations with Poroshenko in tit-for-tat social media videos and the two met in a raucous policy debate in a soccer stadium in Kiev last Friday in front of thousands of their followers.

Back in February, when asked in an interview with Reuters what sets him apart from other candidates, Zelenskiy pointed to his face.

“This. This is a new face. I have never been in politics,” he said.

After performing in student theatre, Zelenskiy came to prominence as a team captain in the TV show KVN, where teams compete against each other with jokes and song-and-dance routines. In 2003, his team formed the basis of TV production company Kvartal 95 http://kvartal95.com/en, which makes Servant of the People.

In the TV series, Zelenskiy starts out as a humble high school history teacher who becomes president after an expletive-laced tirade about Ukraine‘s corrupt political class, secretly filmed by one of his students, goes viral.

Disaffection with how little has changed under Poroshenko has helped fuel Zelenskiy’s popularity, according to Serhiy Leshchenko, an investigative journalist and lawmaker.

“The desire of Ukrainian citizens is to have new faces, to have new politicians ready to reshuffle the whole political class,” he said, comparing the comedian to Trump.

“Both of them are TV stars, and both of them are selling people the dream, so people are ready to accept this dream because they are fed up with the old class of politicians.”

The Maidan protests in 2014 that ousted a Kremlin-friendly president brought hope of change, but Poroshenko’s critics say progress has not come fast enough in a country where corruption remains entrenched, oligarchs amass wealth and influence and poverty levels are among the worst in Europe.

Zelenskiy’s squeaky clean fictitious president is a powerful image, blurring the lines of where his character stops and the real-life politician begins. Even his party is called Servant of the People after the TV series.

As his campaign gathered steam, Zelenskiy brought reform-minded former ministers to his team as advisers, providing a measure of reassurance to investors who nevertheless found his answers on policy questions vague at times.

Zelenskiy told Reuters he would not allow Ukraine to default on its debt commitments to the IMF, which has propped up the economy with billions of dollars in loan.

He hopes the country will eventually stop relying on the IMF but, for now, he would not allow Ukraine “to default and spoil the image of our country”.

Asked for his position on whether he would allow household gas prices to rise to market levels, another IMF demand, Zelenskiy was short on specifics. He said Ukraine‘s tariffs were the lowest in Europe but still too high for many.

Ironically, given the clean image of his fictional president, Zelenskiy has had to fend off suspicion that in real life he is a puppet of Ihor Kolomoisky, a prominent oligarch whose TV channel airs Zelenskiy’s shows.

Zelenskiy insists his relationship with Kolomoisky is strictly professional. He said he would not, as some fear, hand back ownership of PrivatBank,Ukraine‘s largest lender, to Kolomoisky if he becomes president.

As part of an IMF-backed clean-up of Ukraine‘s financial system, the government nationalised PrivatBank in 2016 – and later alleged the lender was used for large-scale fraud and money laundering. Kolomoisky called the allegations nonsense and has said the bank was nationalised on spurious grounds.

“Am I that crazy? Do I want to lose my life, reputation?” said Zelenskiy, when asked whether he would hand PrivatBank back to Kolomoisky.

By In Cyprus
Previous articleSri Lanka lifts curfew after bomb attacks kill 290, wound 500
Next articleAnastasiades to hold a meeting with Putin in China