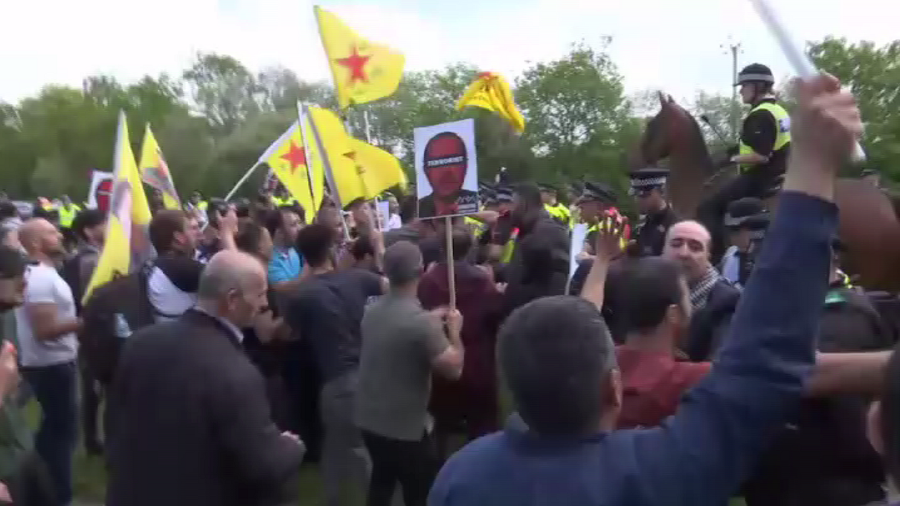 Kurdish activists scuffled with police as they attempted to block Turkish President Recep Tayyip Erdogan’s convoy from making its way to a dinner in Reading. Erdogan is set to meet Theresa May and the Queen during his visit. A group of protesters gathered outside the Wokefield Estate near Reading in Berkshire to try to block the presidential convoy on Sunday afternoon – a plot that was narrowly foiled by dozens of police officers on foot, horse and motorbike.

Tensions between the demonstrators and police reached fever pitch as the group attempted to intercept the motorcade. RT video agency Ruptly captured police screeching at protesters to get back in an effort to contain the crowd.

The two sides briefly clashed as anti-Erdogan protesters threw bottles, while police deployed their batons and attempted to restrain several demonstrators. A 17-year-old protester was injured after he was reportedly “rugby tackled” by officers and was transported to hospital in an ambulance as a result.

In a statement, Thames Valley Police confirmed a protester was taken to hospital but had no details on their injuries, adding that they had simply “facilitated a protest by pro-Kurdish groups.”

“Protesters attempted to block the passage of vehicles and police tactics were deployed to protect the protesters and keep the road clear for the vehicles,” police said.

Erdogan started his three-day visit to the UK by attending a lunch organised by the British Turkish Tatlidil forum. Later this week, he will be meeting Prime Minister Theresa May and Queen Elizabeth II.