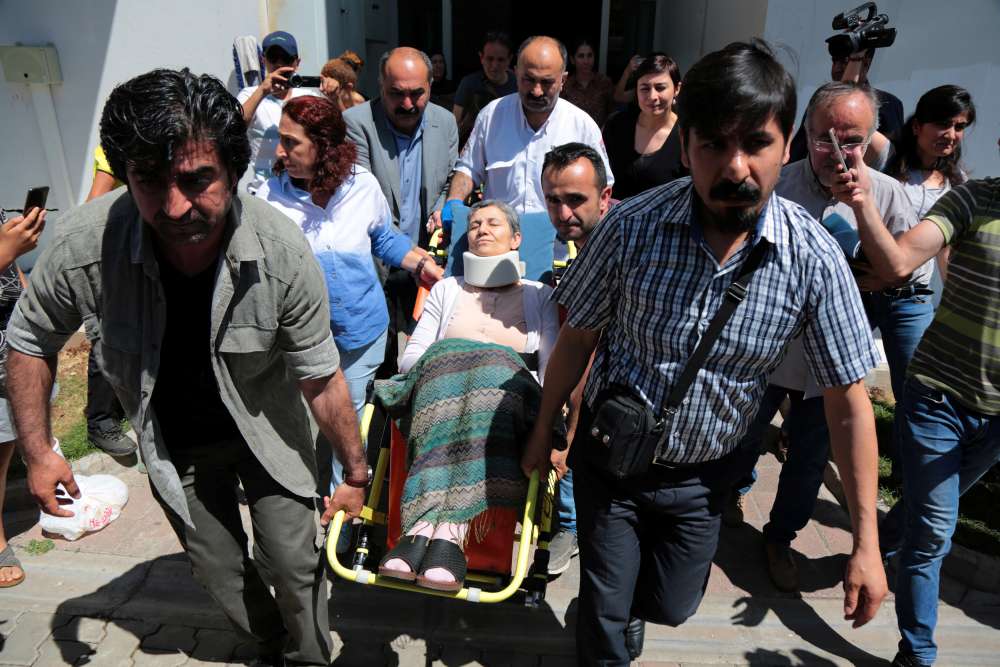 Several Kurdish lawmakers and thousands of prison inmates in Turkey have ended their hunger strike, heeding a call from jailed militant leader Abdullah Ocalan, MPs said on Sunday, 200 days after the protest was launched.

The decision removed a source of tension in mainly Kurdish southeast Turkey after Ankara let Ocalan meet his lawyers this month for the first time since 2011, triggering speculation about possible fresh efforts to end conflict in the region.

Pro-Kurdish Peoples’ Democratic Party (HDP) lawmaker Leyla Guven began a hunger strike in November in a bid to end Ocalan’s years of isolation by securing him regular access to his family and lawyers.

“Comrades who have committed themselves to hunger strikes and death fasts, I expect you to end your protest,” Ocalan said in a statement read out by one of his lawyers at a news conference in Istanbul on Sunday morning.

Ocalan has been held in an island prison since Turkish special forces captured him in Kenya in 1999 and is revered among Kurdish HDP supporters who see him as key to any peace process.

On Wednesday, the lawyers visited him for the second time this month. Authorities had repeatedly rejected earlier requests to visit him, citing reasons including ship repairs and poor weather.

In Diyarbakir, the southeast’s largest city, a hunger-striking MP announced the end of the protest at a news conference. Hunger strikers’ mothers, wearing white headscarves, applauded and chanted in Kurdish “long live the prison resistance.”

The lawyers’ visits resumed a month before a re-run of the Istanbul mayoral election and prompted speculation of steps towards a new peace process four years after Ankara’s talks with Ocalan on ending conflict in southeast Turkey fell apart.

However, Justice Minister Abdulhamit Gul has denied there is any connection.

Some commentators have suggested the decision to allow lawyers to visit Ocalan could be an attempt to win over Kurdish voters by the AK Party.

Election authorities annulled the vote, citing irregularities. The HDP has indicated it will again support the opposition in the June 23 election re-run.

Kurds make up around 15 percent of Istanbul’s population of more than 15 million and mostly vote for either the pro-Kurdish HDP or the AK Party.

Before being transported to hospital by ambulance, Guven said the hunger strike had achieved its goal.

“But our struggle against isolation and our struggle for social peace will continue in all areas. This struggle must lead to an honourable peace,” she said in a written statement.

Ocalan is the founder of the Kurdistan Workers Party (PKK), designated a terrorist group by Turkey, the European Union and United States.

His lawyer Newroz Uysal cited him as saying Ankara’s permission for lawyers to meet him did not mean there was a negotiation process. But Ocalan said he was ready to play a positive role on issues concerning Syria.

Earlier in May, Ocalan called on the Kurdish-led Syrian Democratic Forces (SDF) to resolve disputes in Syria without conflict. Ankara views the YPG militia, which forms the core of the U.S.-backed SDF, as part of the PKK.

Guven was joined on hunger strike by three more MPs, around 3,000 inmates in prisons across Turkey and activists abroad, according to her party, the third largest in parliament.

The HDP said seven people, six in Turkish prisons and one in Germany, had killed themselves in March in protest against Ocalan’s isolation. Guven had been consuming water, vitamins and sugar during the hunger strike.

The PKK launched a separatist insurgency in southeast Turkey in 1984. More than 40,000 people have been killed in fighting since, mostly Kurds.

In November 2012, Ocalan made a similar call to end a hunger strike by prisoners. A month later it emerged that he was in talks with Ankara on a peace process.

Those talks and a ceasefire broke down in 2015, unleashing some of the worst violence since the insurgency began. Erdogan’s AK Party has since formed an alliance with nationalists who revile Ocalan and who fiercely opposed the peace process.