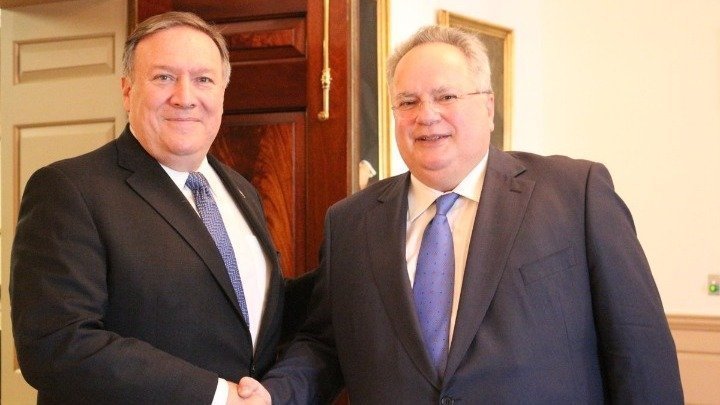 Greek Foreign Minister Nikos Kotzias met in Washington on Monday with State Department Secretary Michael Pompeo, as part of a five-day visit to the United States.
Pompeo expressed continued support for Greece’s economic recovery, underscoring the importance the US places on its role as honored country at the International Thessaloniki Fair in September, State Department Spokesperson Heather Nauert said.

Pompeo “commended Greece for its leadership role in the region, including efforts to address challenges in the Balkans and the Eastern Mediterranean,” Nauert’s statement said. The two men “agreed to remain in close communication on these and other bilateral, regional, and global issues of mutual interest, and to work closely together in coming days to ensure stability of the Eastern Mediterranean.” They also agreed to establish a US-Greek strategic dialogue on key areas of cooperation, it said.

Kotzias voiced the need to maintain security and stability in the area, and detailed Turkey’s violations of international law, especially in terms of the Cyprus Republic’s sovereign rights. “Cyprus must not be seen as a so-called UN problem, but as a sovereign state with specific roles and prospects in the area,” the Greek FM said.
Pompeo asked Kotzias for an update on the issue of the two Greek servicemen held in the jail in Edirne since March. “We said it was unacceptable for a NATO member-state to detain two officers of the Greek army, but as you know Turkey has detained a series of US citizens also.”

Although the FYROM name issue was not raised in their meeting, the Greek FM said it was discussed during his meeting earlier with Wess Mitchell, assistant Secretary of State for Europe and Eurasian Affairs. “We obviously support the need to adopt one of the names proposed by (UN Special Envoy for the name issue Matthew) Nimetz and to proceed towards the implementation of a strategic plan of friendly collaboration in the future with this country under its new name. Nobody is pressuring us because Greece takes initiative in actions,” Kotzias added.
According to the Foreign Ministry, on Tuesday Kotzias is scheduled to meet with National Security Advisor John Bolton. He will also meet with House of Representatives and Senate members, including representatives of the Congressional Hellenic Caucus and the Congressional Hellenic Israeli Alliance, and academics.

On Wednesday, the foreign minister is scheduled to meet with UN Secretary General Antonio Guterres, with their meeting focusing on recent developments on the Cyprus and FYROM name issues. The same day, Kotzias will attend a working lunch with UN General Assembly President, and Slovakian counterpart, Miroslav Lajcak.
On the last two days of his visit, Thursday and Friday, the foreign minister will meet anew with his FYROM counterpart Nikola Dimitrov and Nimetz.

By In Cyprus
Previous articleMoody’s: Licensing of Cyprus’ first credit-acquiring company is credit positive for banks
Next articleTurkish lira continues its freefall