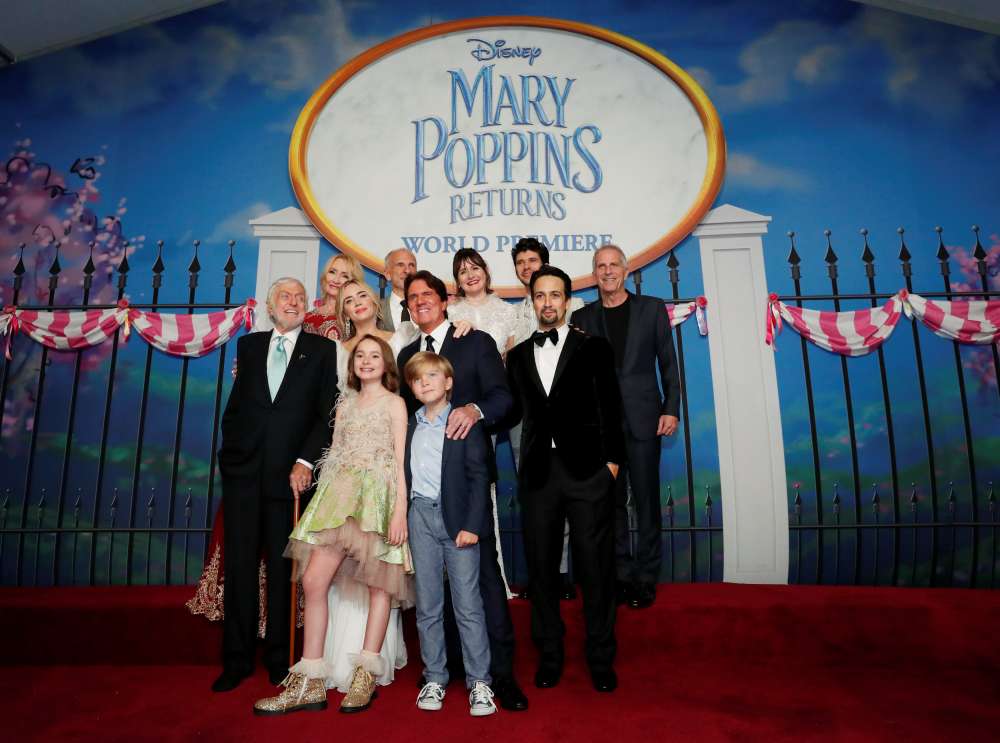 Flying through the clouds with a black parrot umbrella and holding her signature carpet bag, whimsical British nanny Mary Poppins made her “practically perfect” movie comeback on Thursday, more than 50 years after first charming audiences worldwide.

“Mary Poppins Returns,” set some 20 years after the film that made Julie Andrews a star, had its world premiere in Los Angeles, featuring a new cast and new music but with a nostalgic nod to the original.

The 1964 film “Mary Poppins” starring Andrews and Dick Van Dyke as a cheerful chimney sweep brought a best actress Oscar for Andrews and an award-winning score of songs like “A Spoonful of Sugar” and “Supercalifragilisticexpialidocious” that have become classics.

In “Mary Poppins Returns,” Emily Blunt plays the firm but kind singing nanny who descends on London in the early 20th century to take care of the children of the now adult Banks siblings from the 1964 film.

Like the original, “Mary Poppins Returns” features fantasy sequences and plenty of dance numbers. It even brings back the animated dancing penguins.

“It really is a trip down nostalgia lane and paying homage to these incredible movies that we all grew up watching that are so representative of everything we remember as children,” Blunt told reporters on the red carpet.

“Yet we’re doing something new, and I think it’s a film that’s just full of feeling and full of joy.”

“Hamilton” rap musical creator Lin-Manuel Miranda takes on the role played by Van Dyke in 1964, but as a young lamp lighter rather than a chimney sweep. Van Dyke, 92, who was given a standing ovation by the Hollywood audience on Thursday, has a cameo as a kindly, tap-dancing banker.

Disney’s “Mary Poppins Returns” marks the first time in 54 years that the character, who was created in books written by P.L. Travers in the 1930s and 1940s, has been revisited on film. The story was turned into a Broadway and London stage musical 15 years ago.

Director Rob Marshall said he got involved in the sequel because he felt the world needed some Poppins magic.

“The world’s in a fragile place you know,” he said. “I feel it personally and I know that everyone on our film felt it, the entire cast.”

The movie begins its worldwide rollout on Dec. 19. and is expected to take a healthy $65 million in its first week in North America alone, according to box-office analysts.

By In Cyprus
Previous articleGerman Air Force: No suspicion of criminal cause behind unscheduled landing of Merkel’s plane
Next articleReplica of 2,400-year-old Israeli ship – that carried Cypriot pots – docks at Limassol Marina