Karpasia road fatality was on way to see injured husband, children in hospital 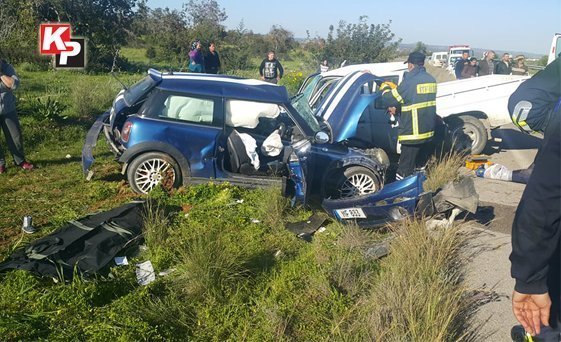 A woman killed in a collision in Turkish-held Karpasia yesterday was on her way to see her husband and two children who had been injured in a road accident near Leonariso and were being taken to hospital, the Turkish Cypriot media reported on Friday.

Asiyie Tsinar Talai, 31, had just heard that her 37 year old husband, 11 year old son and two and a half year daughter had been injured, got into her car and headed to hospital.

On the Tavros to Koma tou Yialou road she reportedly lost control of her car. It veered into the opposite lane and collided head on with a car driven by Ali Demir 54. With him were his wife Elif, 53 and Ali Polat, 48.

The two women were killed on impact while the driver of the other car is in critical condition. The third person suffered minor injuries and has been hospitalised at the hospital.

Also in hospital are nine other people who were injured in the first collision, including the Talai family.

According to the Turkish Cypriot press, the first accident occurred at 2 pm when a car driven by Mustafa Ildiz, 37, suddenly crossed into the opposite lane near Koma tou Yialou and collided head on with the car driven by Talai. The latter’s car overturned.

In the car with Indiz were his three children aged 13, five and three as well as Deria and Don Ates, aged 25 and 42. All nine have been hospitalised.

A total of 11 people were injured in the two accidents, five of them children.

As Turkish Cypriots mourn the victims, Turkish Cypriot leader Mustafa Akinci and his wife Meral have cancelled a reception scheduled for tonight on the occasion of International Women’s Day.

Yesterday’s two fatalities bring the number of road deaths in the Turkish-held north since the start of the year to five.