Kammenos refers to broadening Greece-Cyprus-Israel cooperation to include USA 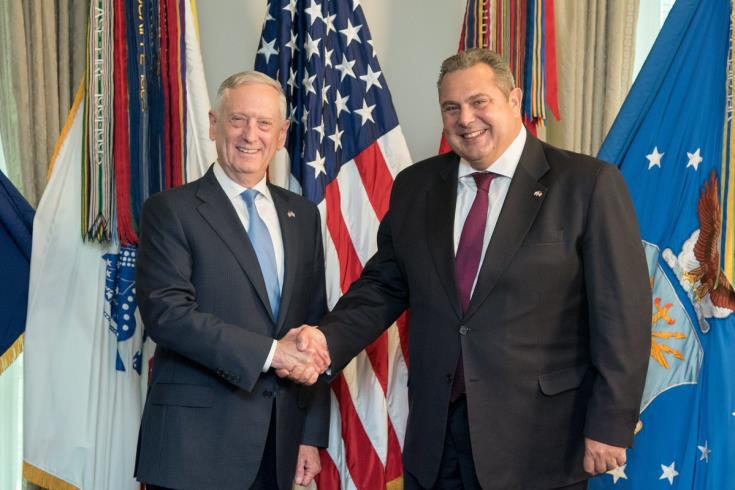 Greece’s Defence Minister Panos Kammenos says the trilateral agreement between Greece, Cyprus and Israel can be broadened to include the United States.

Kammenos was speaking after separate meetings on Tuesday with US Secretary of Defence Jim Mattis at the Pentagon and Deputy Secretary of State John Sullivan at the State Department.

Asked if the issue of the Republic of Cyprus’ exclusive economic zone was raised, Kammenos said “we are proceeding in cooperation to broaden the trilateral agreement between Greece, Cyprus and Israel, with the United States as well.”

According to Pentagon Spokeswoman Dana W. White, the meeting with Mattis confirmed the longstanding defence relationship between the US and Greece.

Speaking before the meeting, Mattis described Greece as a steadfast and excellent ally.

Kammenos told reporters after the meeting that this relationship of trust has assigned Greece the role of a stability axis to the south with Cyprus and Israel, and the countries of the Middle East, such as Egypt, Jordan, the United Arab Emirates and Lebanon, and to the north with Albania, Bulgaria, Serbia and FYROM.

He said the next step would be to sign joint defence agreements that would contribute towards solving problems and building a new energy policy in the broader region.