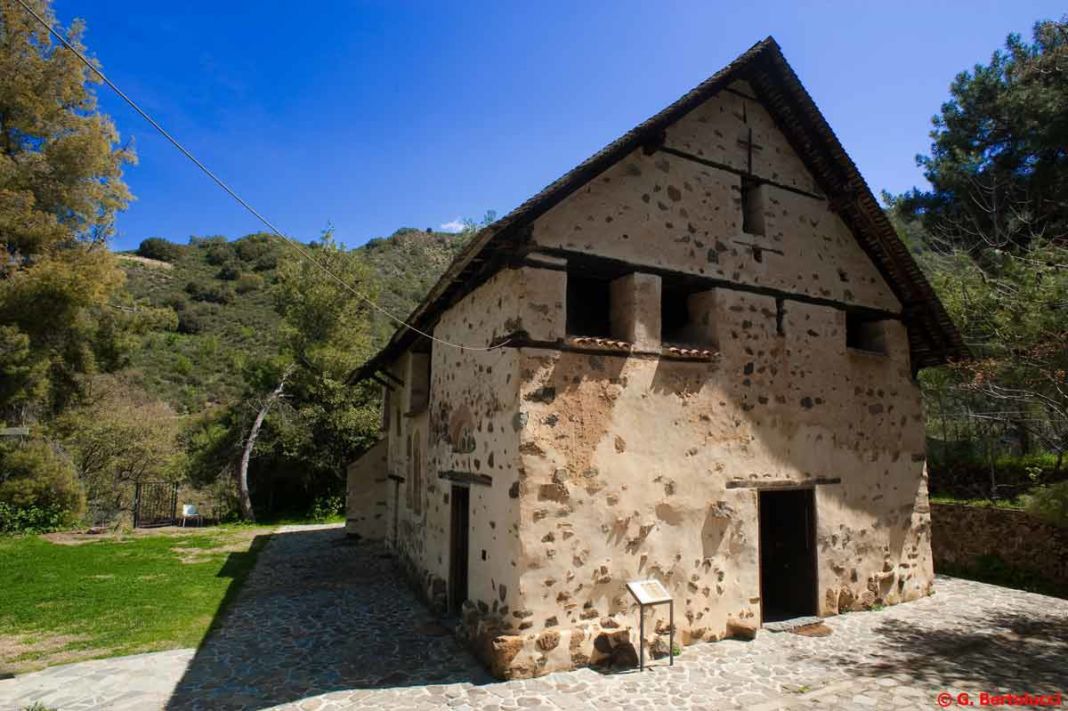 “Agios Nikolaos tis Stegis” (literally, Saint Nicholas of the Roof), located close to the mountainous Kakopetria, is the only thing remaining from an old monastery. As it is made obvious by the church, the monastery was established in the 11 th century. However, we have no other information about it. The ceramic (brick and tile) decor of the church associates it with Constantinople and the Greek region in general. The monastery seems to have flourished both during the Middle Byzantine era as well as the Frank domination era, judging by the repeated decoration of the church with frescoes and the large -dedicated by a Frank Knight at the end of the 13 th century -icon of St Nicholas. The monastery seems to have already declined by the 17 th century and dispersed at the end of that century. When in 1735 the Russian monk Basil Barsky visited it, he met some monks there too. Later on, the estates of the monastery were leased to clergymen and by the end of the 19 th century to laymen.

The “Agios Nikolaos tis Stegis” church is of the cross-in-a-box style with a dome.

UNESCO has included the church of “St Nicholas of the Roof” in the list of Worldwide Cultural heritage, because of its special value.

With donations and after an initiative by the inhabitants of the Kakopetria community, the -now -main church of the village was recently constructed. The re-construction of the church started in 1989 and ended in 1994. It is a rather large church with a capacity of 700 persons.

Architecturally, it is built in the Byzantine style with a dome. Externally it is coated with plaster and temporarily whitewashed -although there are plans for a facing made with local stone.

Internally the church has started being covered with frescoes. Above the chancel there is the fresco of the “Platytera” and further above those of the “Resurrection”, the “Annunciation”, and various other frescoes with representations of saints. The icon screen, which has three gates, the “Orea Pyli” (Beautiful gate) in the centre, the other two to the left and to the right, is woodcut; the same goes for the Psalters and the High Priest’s throne. In the west side of the church at the “Narthex”, beneath the women’s loft, there is a special kneeling desk where the icon dedicated to St Panteleimon lies. There -by the Narthex -are two arches, one to the left and one to the right. There are plans to have a special area there for a baptistery in the future. Quite important is the presence of the amphitheatre-like women’s loft, which allows the faithful to observe the various religious ceremonies in comfort.

The memory of St Panteleimon is celebrated on the 27 th of July, when many Christians from the surrounding regions attend this great holiday.

The church dedicated to the Saviour’s Configuration (“Metamorfosi tou Sotira”) is built in the middle of “Palio Chorio” (“Old Village”). It was constructed in the 15 th century (1520) and it has the same architectural style as the other two small churches of the village, that of “Panagia Theotokos” and that of Saint George “Perachoritis”. Up until 1994, liturgies were conducted daily since it was considered as the village’s main church.

It is a rectangular church of the Basilica style and with elements of the Byzantine style. It can accommodate up to 100-150 faithful. Externally it is made of stone and whitewashed.

The inhabitants built extensions to the church in 1880 and 1960 because the village was continuously growing. When they dug the floor they discovered many pieces of frescoes, which surely came from this church. Indeed, they were able to read the name of the hagiographer who was named Symeon Afxentis. He is known for his frescoes of the “Panagia Theotokos” and “Archangel” churches in the village of Galata.

The icon screen is woodcut, as also are the two Psalters that can be found in the church.

There are various remarkable representations dating back to the 16 th and 17 th century. The icon screen is of various different chronologies.

It is located at the entrance of Kakopetria. This is a small church. It was constructed in 1514 and it seems to be a Byzantine style chapel. The south side, due to a partial demolition done so as to clear the way for the road to Galata, reveals that it was then built with mud-bricks. Externally it was whitewashed. The roof is of the type accustomed in this region. It is wooden, v-shaped, and with flat tiles. This type of construction was dominant since the 13 th century.

Internally it is entirely covered with frescoes. The frescoes date back to the first half of the 16 th century. Some of them are destroyed. However, there are some that are in a relatively good condition.

The frescoes entitled “the Lord on the way to Golgotha”, “Resurrection”, “Pentecost”, “the Assumption of the Virgin Mary”, “Saint Maria the Egyptian”, and “Saint Kosmas” are on the north wall.

Prayers take place from the 1 st until the 13 th of August and many faithful sit in the yard -where there are some seats -so as to attend them.

A liturgy takes place on the 15 th of August, the day that the Assumption of the Virgin Mary is celebrated and many believers come to celebrate and kneel before Her holy icon.

The small church is located north of the village and at the left of the tourist road, which leads to Troodos, under a large bridge.

It received the name “Perachoritis” because the neighbourhood there is called “Pera Geitonia” or “Pera Chorio”. It was constructed in the 15 th century (1520). Externally it is made of stone and it seems to be of the Byzantine style. Internally it is entirely covered with frescoes. The frescoes however have been destroyed due to the passage of time. Only two of them are preserved. One portrays Saint Anastasia the “Farmakolytra” (“the one that remedies poisons”) and the other Saint Paraskevi.

The small icon screen is woodcut and gilt-edged. The High Altar has a coloured decor. It is a small church and can accommodate around 50 believers.

A liturgy is conduced in it on the 23 rd of April or on Easter Monday, the day that Saint George’s memory is celebrated and His holy icon is carried about in procession.

At the church of Agios Panteleimonas, there is a chapel dedicated to Agios Fanourios. The inauguration ceremony was held by the Metropolitan Bishop of Morfou, Mr. Neophytos, on November 1st, 2008. The construction expenditure of the chapel was sponsored by Reverend Oikonomos Alexandros in memory of his wife Ianthi and his parents.