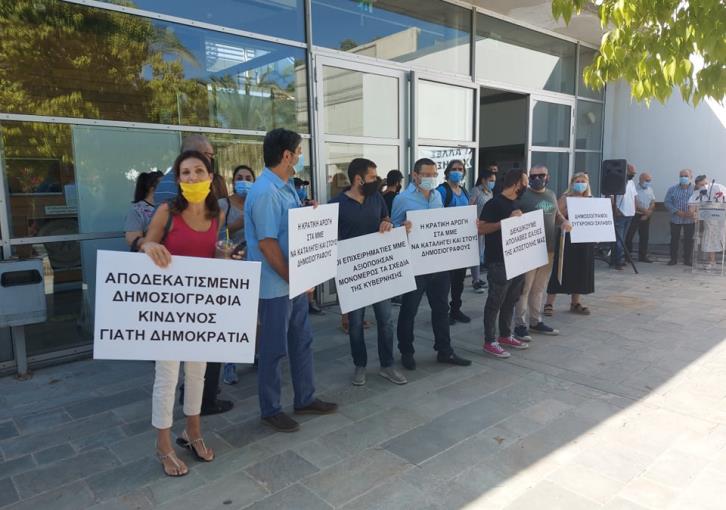 A protest was held on Tuesday morning by journalists over the labour problems the industry is experiencing.

Professional journalists in print, electronic and online press, who are seeing their working environment, working conditions and earnings constantly slipping, are calling that a stop is put to the trend, which is leading to the degradation of the profession, which at the same time is a huge blow to democracy.

Specifically, through a resolution approved during the event, journalists are claiming:

– The termination of the under-staffing of all Mass Media companies which makes employees akin to slaves and the produced journalistic product of low quality.

– Earnings equal to the role and mission of journalists in socially and politically.

– The free, unhindered, without obstacles and objections exercise of the sacred and constitutionally guaranteed right of trade unionism.

From the government and the coordinated bodies of the state:

– Ensuring that any assistance given to Mass Media companies is passed on in proportion to those who primarily produce the informational material, i.e. journalists.

– Strict supervision and control of the implementation of all government subsidy plans so that no irregularities, distortions and unfair advantages are observed toward the benefit of employers and to the detriment of employees.

– The strengthening of the institutional role of the only trade union body for journalists, the Union of Cyprus’ Journalists.

From the parliamentary parties:

– Journalists are not friends or foes no matter what the situation is. They are employees, who need support, like any other professional sector of employees.

– Parliament can and must be a forum for the expression of rights and the rights of journalists.

– Embrace the press, print, online and online. It is a key pillar of a democratic state. Strengthening the press and its officials means strengthening democracy.

– Expect comprehensive factual information by those professionally in charge of this mission, journalists.

From the journalistic community:

– Fellow journalists, there can be no substitute for the collective form of claiming and fighting.

– Strengthen the lines of the Union of Cyprus’ Journalists, for your own good, for the good of freedom of expression and democracy, for a better quality of life for you and your families.