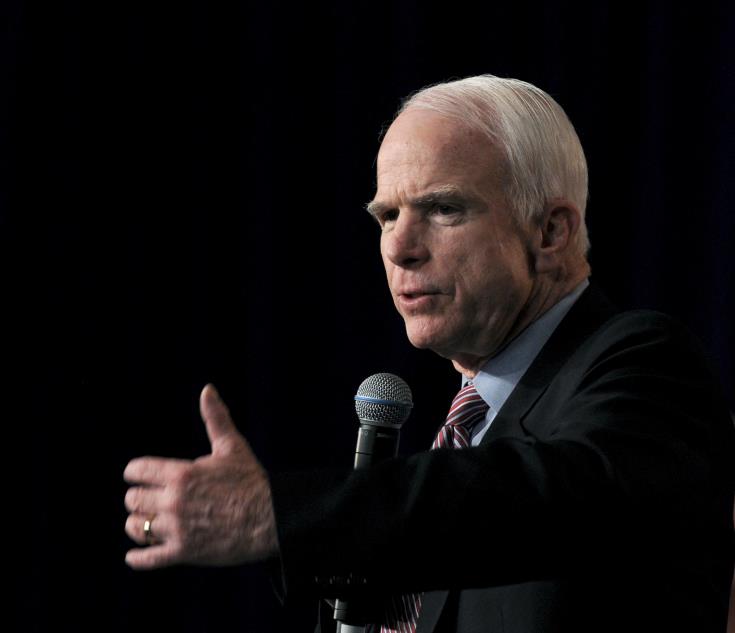 U.S. Senator John McCain, a former prisoner of war in Vietnam who ran unsuccessfully for president as a self-styled maverick Republican in 2008 and became a prominent critic of President Donald Trump, died on Saturday, his office said. He was 81.

McCain, a U.S. senator from Arizona for more than three decades, had been battling glioblastoma, an aggressive brain cancer, since July 2017 and had not been at the U.S. Capitol in 2018. He also had surgery for an intestinal infection in April.

His family announced on Friday that McCain was discontinuing further cancer treatment.

“Senator John Sidney McCain III died at 4:28 p.m. on August 25, 2018. With the senator when he passed were his wife Cindy and their family. At his death, he had served the United States of America faithfully for sixty years,” a statement from his office on Saturday.

McCain will lie in state in both Phoenix, Arizona, and in the Capitol Rotunda in Washington, D.C., and will receive a full dress funeral service at the Washington National Cathedral before being buried in Annapolis, Maryland, his family said.

No further details were provided immediately.

“My heart is broken. I am so lucky to have lived the adventure of loving this incredible man for 38 years,” Cindy McCain wrote on Twitter. “He passed the way he lived, on his own terms, surrounded by the people he loved, in the place he loved best.”

The vacancy created by McCain’s death narrowed the number of Republican-held seats in the 100-member U.S. Senate to 50 seats, with Democrats controlling 49 seats in the upper chamber. Republican Arizona Governor Doug Ducey was expected to appoint a member of his own party to succeed McCain.

That could also give Republicans a slight edge in the battle to confirm Brett Kavanaugh to the U.S. Supreme Court in the weeks ahead because McCain had been too ill to cast any votes this year.

Alternatively affable and cantankerous, McCain had been in the public eye since the 1960s when, as a naval aviator, he was shot down during the Vietnam War and tortured by his North Vietnamese communist captors during 5-1/2 years as a prisoner.

He was edged out by George W. Bush for the Republican presidential nomination in 2000 but became his party’s White House candidate eight years later. After gambling on political neophyte Sarah Palin as his vice presidential running mate, McCain lost in 2008 to Democrat Barack Obama, who became the first black U.S. president.

Paying tribute to his one-time election opponent, Obama said in a statement he and McCain, despite their “completely different backgrounds” and political differences, shared “a fidelity to something higher – the ideals for which generations of Americans and immigrants alike have fought, marched and sacrificed.”

“We saw our political battles, even, as a privilege, something noble, an opportunity to serve as stewards of those high ideals at home, and to advance them around the world,” Obama wrote.

Defense Secretary James Mattis saluted McCain as a figure who “always put service to the nation before self,” and “represented what he believed, that ‘a shared purpose does not claim our identity – on the contrary – it enlarges your sense of self’.”

McCain, chairman of the Senate Armed Services Committee, remained prominent during and after the last White House race as both a frequent critic and target of his fellow Republican Trump, who was elected president in November 2016.

McCain denounced Trump for, among other things, his praise of Russian President Vladimir Putin and other leaders the senator described as foreign “tyrants.”

“Flattery secures his friendship, criticism his enmity,” McCain said of Trump in his memoir, “The Restless Wave,” which was released in May.

McCain castigated Trump in July for his summit with Putin, issuing a statement that called their joint news conference in Helsinki “one of the most disgraceful performances by an American president in memory.” He said Trump was “not only unable but unwilling to stand up to Putin.”

Sources close to McCain have said Trump would not be invited to the funeral.

Shortly after McCain’s death was announced, Trump said on Twitter: My deepest sympathies and respect go out to the family of Senator John McCain.”

McCain, a foreign policy hawk with a traditional Republican view of world affairs, was admired in both parties for championing civility and compromise during an era of acrid partisanship in U.S. politics. But he also had a famous temper and rarely shied away from a fight. He had several with Trump.

He was the central figure in one of the most dramatic moments in Congress of Trump’s presidency when he returned to Washington shortly after his brain cancer diagnosis for a middle-of-the-night Senate vote in July 2017.

Still bearing a black eye and scar from surgery, McCain gave a thumbs-down signal in a vote to scuttle a Trump-backed bill that would have repealed the Obamacare healthcare law and increased the number of Americans without health insurance by millions.

Trump was furious about McCain’s vote and frequently referred to it at rallies, without mentioning McCain by name.

After Trump launched his presidential campaign in 2015, McCain condemned his hard-line rhetoric on illegal immigration and said Trump had “fired up the crazies.” Trump retorted that McCain was “not a war hero,” adding: “I like people who weren’t captured.”

After Trump became president, McCain blasted what he called the president’s attempts to undermine the free press and rule of law and lamented the “half-baked, spurious nationalism” of the Trump era.

McCain, the son and grandson of U.S. Navy admirals, was elected to the U.S. House of Representatives from Arizona in 1982 after more than two decades of Navy service.

He served four years in the House before Arizona voters elected him to the Senate in 1986 to replace Barry Goldwater, the 1964 Republican presidential nominee revered by conservatives.

In running for president in 2008, McCain tried to succeed an unpopular fellow Republican in Bush, who was leaving office with the United States mired in wars in Afghanistan and Iraq and stuck in a financial crisis.

It was a stark contrast between McCain, then a 72-year-old veteran of the Washington establishment, and the 47-year-old Obama, who was offering a “Yes, we can” message of change.

McCain tried to inject some youth and enthusiasm into his campaign with his selection of Palin, Alaska’s governor, as his running mate. But the choice backfired as her political inexperience and shaky performances in media interviews raised concerns about her qualifications.

McCain voiced regret in his new memoir for not choosing then-Senator Joe Lieberman, a Democrat turned independent, as his running mate.

McCain wrote that he had originally settled on Lieberman, Democrat Al Gore’s running mate in the 2000 election, but was warned by Republican leaders that Lieberman’s views on social issues, including support for abortion rights, would “fatally divide” the party.

“It was sound advice that I could reason for myself,” McCain wrote. “But my gut told me to ignore it and I wish I had.”

McCain flew attack planes off aircraft carriers during the Vietnam War. He was preparing for a bombing run in 1967 when a missile inadvertently fired from another plane hit his fuel tanks, triggering a fatal explosion and fire. He suffered shrapnel wounds.

A few months later on Oct. 26, 1967, McCain’s A-4 Skyhawk was shot down on a bombing mission over North Vietnam’s capital and he suffered two broken arms and a broken leg in the crash. A mob then dragged him from a lake, broke his shoulder and stabbed him.

Held at the notorious “Hanoi Hilton” prison and other sites, McCain was beaten and tortured, suffering broken bones and dysentery. He was released on March 14, 1973, but was left with permanent infirmities.

Still, he prided himself on his reputation as a maverick and had a history of working across party lines on immigration, climate change and campaign finance reform.

He also spoke out against the Bush administration’s use of waterboarding, a torture technique that simulates drowning, and other harsh interrogation tactics on detainees in the aftermath of the Sept. 11, 2001, attacks.

He urged the closure of the prison for foreign terrorism suspects at the U.S. naval base at Guantanamo Bay, Cuba, and also sponsored an anti-torture measure that passed Congress in 2005.

McCain wrote in a 2002 memoir: “I’m an independent-minded, well-informed public servant to some. And to others, I’m a self-styled, self-righteous maverick pain in the ass.”

McCain was born on Aug. 29, 1936, at an American naval installation in the Panama Canal Zone – U.S. territory at the time – where his father was stationed.

He acknowledged he was a “smart ass” during his years at the U.S. Naval Academy and graduated fifth from the bottom of his class.

McCain divorced his wife Carol after 15 years of marriage in 1980 and weeks later married the former Cindy Henley, daughter of a wealthy beer distributor in Arizona.

A dark period for McCain came as one of the “Keating Five” group of senators accused of improperly intervening with federal regulators to help political contributor and bank executive Charles Keating, whose Lincoln Savings and Loan failed in 1989 at a cost to taxpayers of $3.4 billion.

McCain was cleared of wrongdoing in 1991 but the Senate Ethics Committee rebuked him for poor judgment.

On July 25, 2017, McCain delivered a Senate floor speech not long after his cancer diagnosis that was widely seen as his farewell address. It included a call to fellow Republicans to stand up to Trump and for all lawmakers to work together to keep America as a “beacon of liberty” in the world.

“That is the cause that binds us and is so much more powerful and worthy than the small differences that divide us,” McCain said.