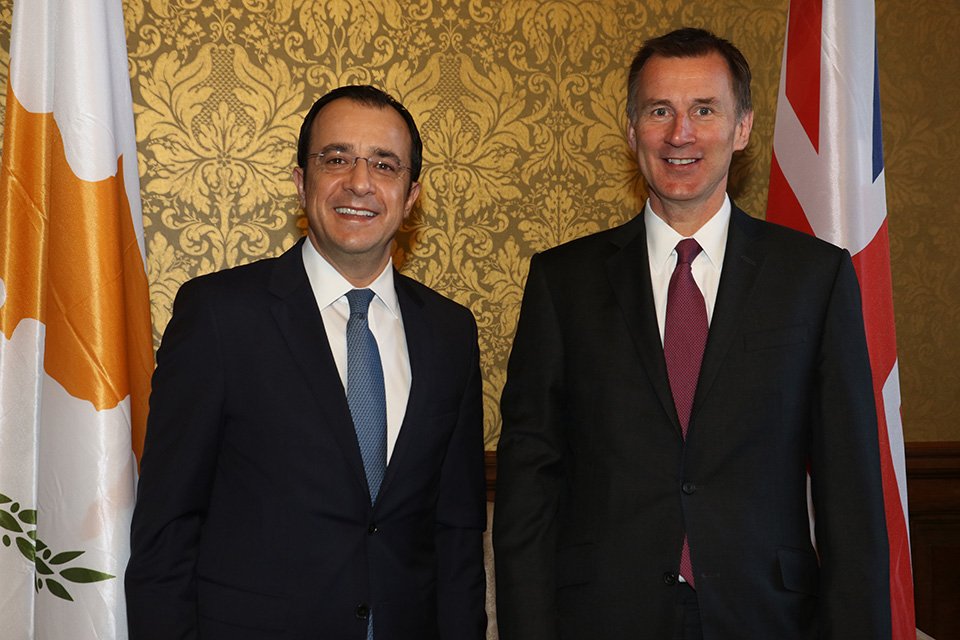 Jeremy Hunt, the UK Foreign Secretary and one of the two candidates to succeed Theresa May at the helm of the Conservative Party and of the country, has described the relationship between Britain and Cyprus as “incredibly important”.

He was addressing a letter to the ‘Conservative Friends of Cyprus’, just as the ruling party’s 160,000-180,000 members were starting to submit their postal votes for either Mr Hunt or Boris Johnson.

In his letter Jeremy Hunt declared his “strong” support of the Conservative Friends of Cyprus, “brilliantly chaired” by Jason Charalambous, and his admiration of the work the group does to promote the interests of Cypriot people in the UK.

“With hundreds of thousands of people of Cypriot origin living in the UK and many thousands of British people living in Cyprus, the ongoing relationship between our two countries is incredibly important,” added the Foreign Secretary.

Describing his vision for the future of the UK after Brexit, he made clear that as Prime Minister he would guarantee the rights of EU citizens lining in the country: “To put the millions of EU citizens who have made the UK their home at ease, I can reconfirm to them that their rights in the UK will be protected whatever the outcome.”

He has also reminded the Conservative Friends of Cyprus members that at their party conference fringe event last year he had discussed with them the efforts that were being made to have the status quo surrounding the British bases areas continued, “so that the everyday life of people crossing daily between the bases areas and the Republic of Cyprus is not affected.” Those discussions have since born fruit.

“I am also always struck by the dynamism and entrepreneurialism of the Cypriot people. As an entrepreneur myself I am hungry and ambitious to unleash the potential of our economy,” continued Mr Hunt.

He then referred to his plans to “turbo charge” the British economy. Indicatively, he wrote about reducing corporation tax down to Irish levels of 12.5%, setting up an independent trade policy, reducing interest payments on student loans and taking “bold decisions” to tackle climate change.

The Conservative Party members will continue voting until July 22nd. The winner will be announced the following day.