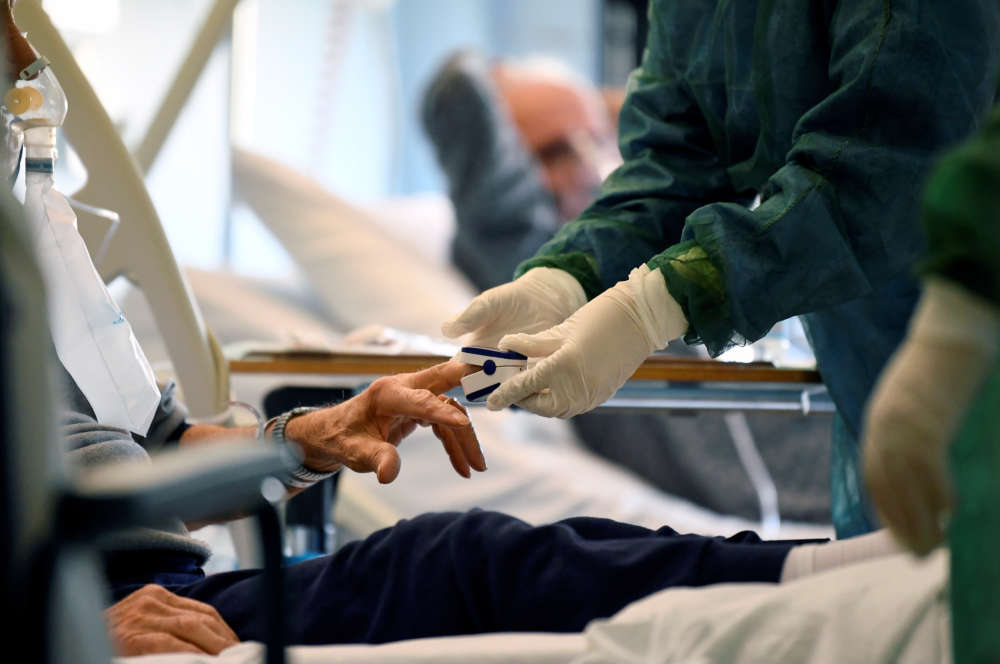 At Italy’s Oglio Po hospital, 25 out of 90 doctors are infected with the coronavirus, compounding the strain faced by a health system overwhelmed by the world’s second biggest outbreak.

Adding in nurses, technicians and other employees, a fifth of the hospital’s personnel has tested positive, hospital director Daniela Ferrari said.

They and healthcare workers like them almost certainly unwittingly spread the virus before needing treatment or quarantine themselves, researchers and unions say.

The picture is the same at other hospitals, among family doctors and in nursing homes – exacerbated, unions, sector leaders and medics say, by them not having enough masks and gloves when the outbreak was detected a month ago.

“We are at the end of our strength,” said Doctor Romano Paolucci, who came out of retirement to help the Oglio Po hospital near Cremona, one of the worst hit towns in the Lombardy region.

“We do not have sufficient resources and especially staff because apart from everything else, now the staff are beginning to get sick.”

In Lombardy, the Italian region with the highest number of cases and deaths, at least two hospitals became vehicles of contamination, with patients infecting medical staff who then spread the disease as they travelled around their communities before a stringent lockdown was imposed.

That is one factor that has helped the virus spread so quickly, said Giuseppe Remuzzi, director of the Mario Negri Institute for Pharmacological Research.

“Patients infected other patients and doctors who then went out and contaminated others,” Remuzzi said.

At a national level, 4,268 health workers – or 0.4 percent of the total – had contracted the virus as of March 20, according to the National Health Institute.

In Lombardy’s northeastern city of Bergamo, 134 family doctors out of 600 – or 22% – had fallen sick or were quarantined, Guido Marinoni, the head of the local association of general practitioners, said. Three doctors have died.

In the city’s nursing homes, the situation was even worse, with 1,464 health workers infected out of 5,805, he said. Bergamo has been so overwhelmed that the army has stepped in to move bodies to other provinces as the cemetery was too full.

Marinoni said that for the first two weeks after the disease was first detected in northern Italy on Feb. 21, family doctors lacked masks and gloves and so were easily contaminated by coughing and feverish patients who went to see them without knowing they had the coronavirus.

Only in early March, the family doctors of Bergamo were given 25-30 surgical masks, he said.

“If a person with the disease contaminates on average another two people, a doctor who is moving around the community can contaminate at least another 10 people and this spreads the contagion in an exponential way,” Marinoni said.

“It’s like fighting a war with a toy gun. I hope the rest of Europe learn from the good things Italy did, but also from our mistakes.”

The head of the government’s coronavirus relief effort says Italy needs 90 million masks a month and it has “activated all possible channels” to achieve that.

Protective and medical equipment, including masks and ventilators, “are produced in faraway places, we don’t have a national industry with the capacity to make them on a big scale”, Domenico Arcuri told state television on Sunday.

Lombardy governor Attilio Fontana said on Thursday he had signed a contract for 4 million masks from Jordan.

At Milan’s Niguarda hospital, a patient and a nurse in the psychiatric ward started showing symptoms a few hours apart from each other on March 10, according to a letter sent by CISL union representative Rossella Delcuratolo to hospital managers.

Within days, 11 patients and eight nurses in the ward had contracted the virus, Delcuratolo said.

“We are fighting the spread of the virus by imposing a lockdown on society, but we also need to stop it spreading within the health sector,” she told Reuters. “Health workers live in fear of infecting people at work and at home.”

Even in places where protective gear was present from the start, such as Policlinico San Marco near Bergamo, several staff were still infected, said Roberto Mezzetti, a vascular surgeon who volunteered to help out with coronavirus patients.

They probably contracted the virus outside the hospital as they went about their normal lives in the early stages of the outbreak, he said. Three of them were in serious condition.

Many health workers say they should all be tested. Lombardy said at the weekend family doctors would be given swabs, while hospital staff would have their temperature taken daily.

But some doctors warn that if everyone is tested, the real rate of infection among medics could be so high that hospitals would stop working.

“I fear that hospitals would empty,” said Mario Riccio, head of anaesthesiology at the Oglio Po hospital.

By In Cyprus
Previous articleCoronavirus: Pharmaceutical Association observes delays in delivery of medicine
Next articleHave questions about Coronavirus? You can now text WHO on WhatsApp