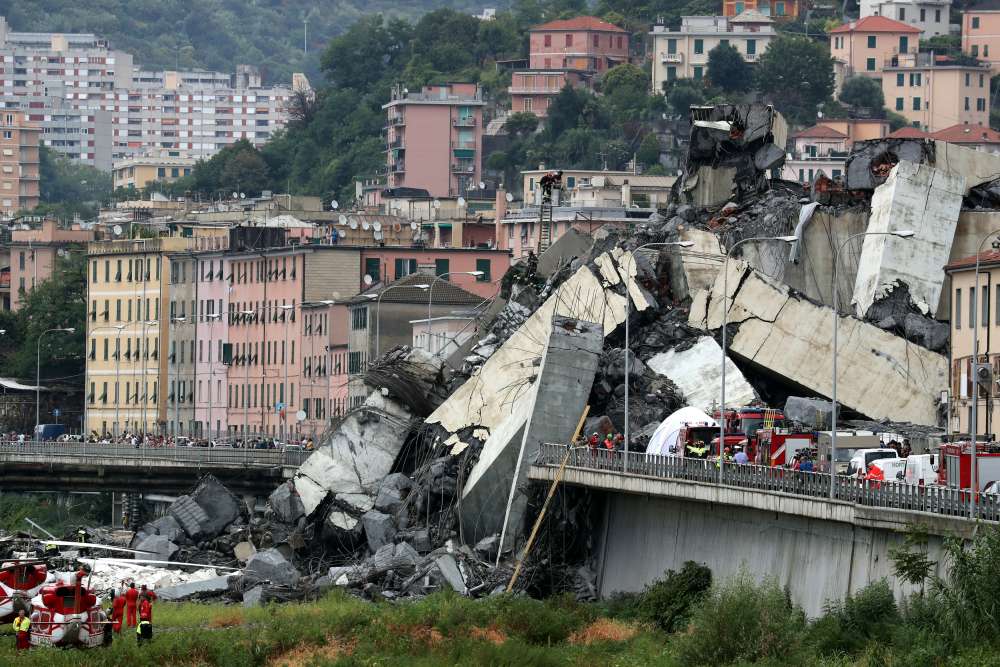 Italy’s government opened an investigation on Thursday into the country’s biggest toll-road operator, hours after saying it could face a heavy fine or lose its concession over a bridge collapse that killed at least 38 people.

A section of the bridge gave way on Tuesday in busy lunchtime traffic, plunging dozens of vehicles 50m (160 feet) below and engulfing Autostrade per l’Italia into a political fire storm.

Shares in the operator’s parent, Milan-listed international Atlantia, fell by as much as 25 percent at one point as investors spooked by threats of government retaliation dumped the stock. They closed down around 22 percent at 18.3 euros.

Shares in other toll-road firms such as SIAS and ASTM also fell, after Deputy Prime Minister Luigi Di Maio said the state would have to take over the country’s motorways if concession-holders could not do the job properly.

Launching its investigation late on Thursday, the Transport Ministry said it had given Autostrade 15 days to show it had met all its contractual obligations, adding it wanted the company to rebuild the bridge at its own expense.

If the justifications provided by the company were judged inadequate Rome would consider it a breach of the concession terms.

Earlier Deputy Transport Minister Edoardo said Autostrade, owned by Italy’s Benetton family, could lose its concession as it had failed to ensure the viaduct’s safety.

“The options we’re looking at are the full revocation, the revocation of just the A10 section or a penalty, but a 150 million euro ($170 million) penalty is too low,” Rixi told Reuters.

Under the terms of the concession Autostrade can be fined up to 150 million euros.

A government source separately suggested Italy may impose a fine rather than withdraw Autostrade’s concession as the latter could involve a long legal fight and risk the government being ordered to pay compensation to the company.

Autostrade says it made regular, thorough safety checks on the 1.2 km-long viaduct, part of a motorway linking the port city of Genoa with southern France, and had used world-leading experts when conducting the tests and inspections.

Autostrade will hold an extraordinary board meeting on the crisis next week a source close to the matter said.

Prosecutors have opened an investigation into the reasons behind the bridge collapse, but have yet to publicly identify the cause.

Italian Prime Minister Giuseppe Conte has declared a state of emergency for Genoa, one of Italy’s busiest ports, whose main land corridor with France has effectively been severed.

In the valley below the shattered structure, cranes moved away chunks of debris on Thursday as rescue teams searched for survivors under the rubble of a bridge completed in 1967 and overhauled just two years ago.

A state funeral for the victims will take place in Genoa on Saturday, officials said, as the coffins of some of the dead were laid out in a hospital chapel.

One man stood in silence with his hands on the coffin in front of him. Other relatives were comforted by family members as they wiped away their tears.

Italy’s ruling coalition has threatened to break EU budget rules if needs be to repair infrastructure and ensure there’s not repeat of the disaster.

A spokesman for the executive European Commission rebuffed any suggestion EU spending rules were crimping action by Italy, saying Rome was getting 2.5 billion euros from EU coffers for investments in network infrastructure in 2014-2020.

“Even without this tragedy the likelihood of the Italian government testing the EU’s patience with respect to its budget rules was always likely to be there,” CMC Markets analyst Michael Hewson said.

“And we’ve seen that in the way that the investors are reacting around the bond markets. What this has done I think is act as a bit of a lightning rod for investors.”

Bonds issued by Atlantia and its Autostrade per l’Italia unit have fallen sharply since Tuesday and now trade at record lows. A document detailing the terms for 3.2 billion euros worth of bonds guaranteed by Autostrade show that an early termination of the motorway concession would give bondholders a right to demand an early repayment.

Bankers and analysts said Atlantia was less likely to bid for major projects abroad given the threat of punitive government measures against its Autostrade unit. Autostrade is 88 percent owned by Atlantia and accounts for around 66 pct of its revenues.

“Atlantia is 100 percent focused on handling the Genoa crisis,” a source familiar with the matter said. “I can’t see them investing any resources into a new bidding process.”