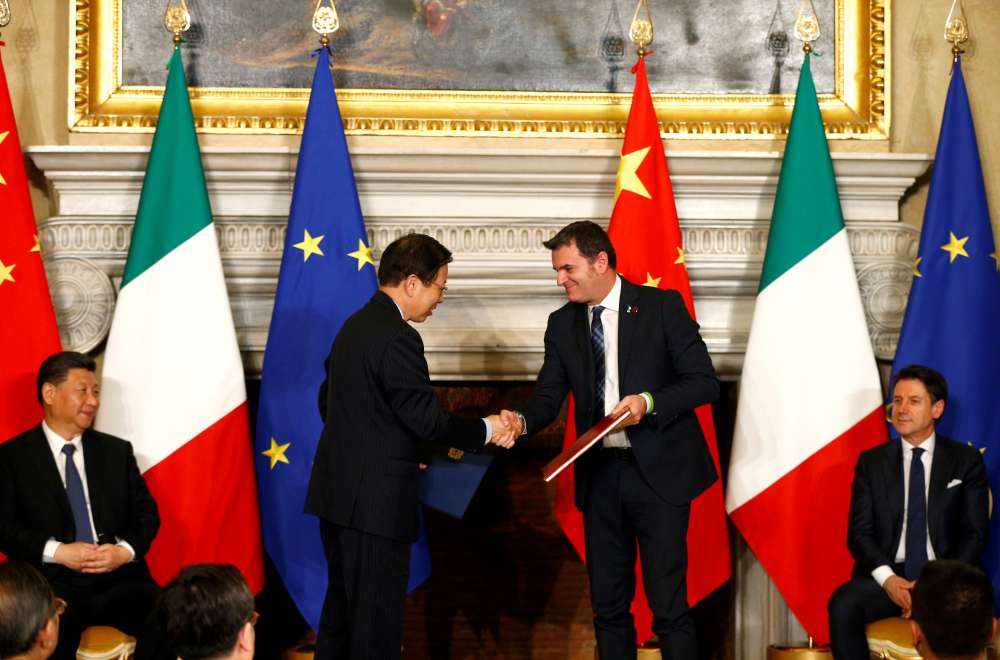 Saturday’s signing ceremony was the highlight of a three-day trip to Italy by Chinese President Xi Jinping, with the two nations boosting their ties at a time when the United States is locked in a trade war with China.

The rapprochement has angered Washington and alarmed some European Union allies, who fear it could see Beijing gain access to sensitive technologies and critical transport hubs.

Deputy Prime Minister Luigi Di Maio played down such concerns, telling reporters that although Rome remained fully committed to its Western partners, it had to put Italy first when it came to commercial ties.

“This is a very important day for us, a day when Made-in-Italy has won, Italy has won and Italian companies have won,” said Di Maio, who signed the memorandum of understanding on behalf of the Italian government in a Renaissance villa.

The Belt and Road Initiative (BRI) lies at the heart of China’s foreign policy strategy and was incorporated into the ruling Communist Party constitution in 2017, reflecting Xi’s desire for his country to take a global leadership role.

The United States worries that it is designed to strengthen China’s military influence and could be used to spread technologies capable of spying on Western interests.

Italy’s populist government, anxious to lift the economy out of its third recession in a decade, dismissed calls from Washington to shun the BRI and gave Xi the sort of red-carpet welcome normally reserved for its closest allies.

Some EU leaders also cautioned Italy this week against rushing into the arms of China, with French President Emmanuel Macron saying on Friday that relations with Beijing must not be based primarily on trade.

There was not even universal backing for the BRI agreement within Italy’s ruling coalition, with Deputy Prime Minister Matteo Salvini, who heads the far-right League, warning against the risk of China “colonialising” Italian markets.

Salvini did not meet Xi and declined to attend a state dinner held in honour of the visiting leader on Friday.

Di Maio, who leads the 5-Star Movement, says Italy is merely playing catch up, pointing to the fact that it exports significantly less to China than either Germany or France.

Italy registered a trade deficit with China of 17.6 billion euros last year and Di Maio said the aim was to eliminate the deficit as soon as possible.

After talks with Italian Prime Minister Giuseppe Conte and Di Maio in the morning, Xi flew to the Sicilian city Palermo for a private visit on Saturday afternoon.

He is due to head to Monte Carlo on Sunday before finishing his brief tour of Europe in France, where he is due to hold talks with Macron and German Chancellor Angela Merkel. ($1 = 0.8840 euros)