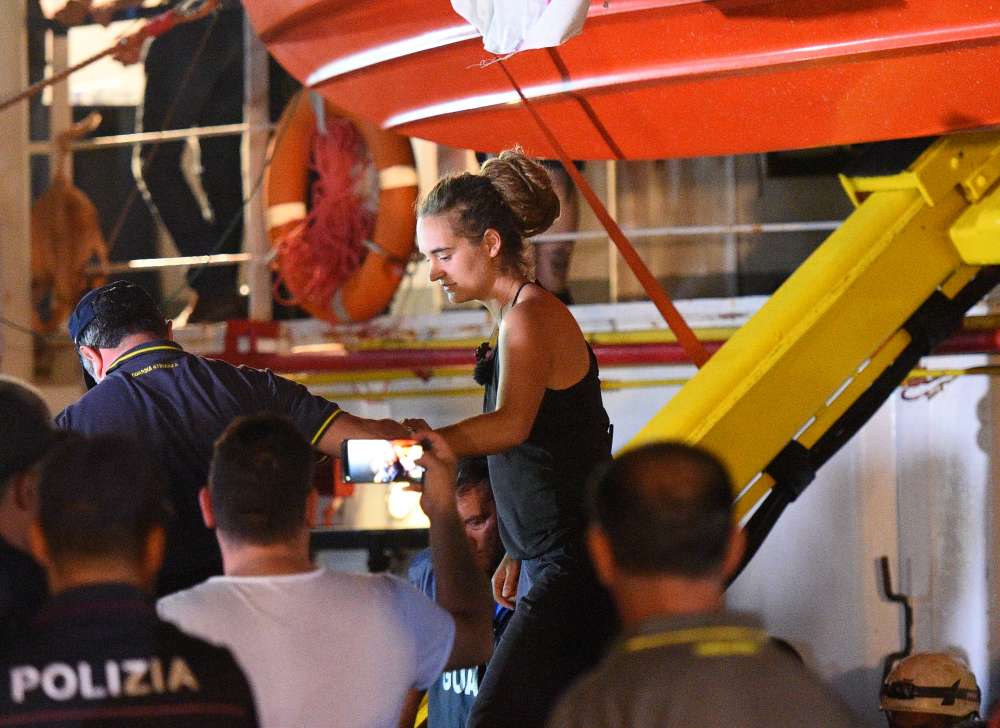 Italian police arrested on Saturday the German captain of a migrant-rescue ship at the centre of a standoff with the Italian government, after she docked at the island port of Lampedusa.

The Dutch-flagged Sea-Watch 3, operated by German charity Sea-Watch, has been at sea for more than two weeks with 40 rescued Africans on board. The Africans were allowed to disembark and were taken to a reception centre on the island.

After waiting in international waters for an invitation from Italy or an EU state to accept the ship, captain Carola Rackete decided this week to sail for the southern Italian island of Lampedusa but was blocked by Italian government vessels.

But in the early hours of Saturday morning, Rackete entered the port where the ship docked amid a heavy police presence.

Live television video showed the 31-year old German being taken off Sea-Watch 3 by tax police and driven away amid applause and barracking from bystanders gathered at the port.

She has been arrested for “resisting a war ship”, a charge which, according to media reports, carries a penalty of up to 10 years in prison.

Italy’s right-wing interior minister, Matteo Salvini, who is taking a tough line against migrant rescue ships, previously said he would only allow Rackete to dock when other European Union states agree to immediately take the migrants.

He said Sea-Watch 3, which had not been given permission to dock, had put at risk tax police by squashing one of their motor launches against the port front as it tried to stop the docking.

Salvini, who criticised the Netherlands saying it had given the ship a flag and then washed its hands of the matter, told RAI radio that Italy had been given assurances by five European countries they would take the migrants.

He did not name the countries but media reports said France, Germany, Luxembourg, Finland and Portugal had agreed.

France’s interior minister, Christophe Castaner, said in a statement that the French authorities would take in 10 of the migrants.

Speaking at the G20 summit in Osaka, Premier Giuseppe Conte said that, as a lawyer, he recognised there were grounds for possible criminal charges but said it was up to judges to apply the law. “But laws are laws whether you like them or not,” he said.

Rackete, who has become a symbol of defiance for challenging Salvini’s authority, is already under investigation for breaking Italy’s beefed up laws against non-government rescue ships.

Migration policy has been among the sources of tension between Italy and EU neighbour France.

Castaner used his statement to criticise unilateral moves by Italy and defend French and EU support for Italy in handling migrant arrivals.