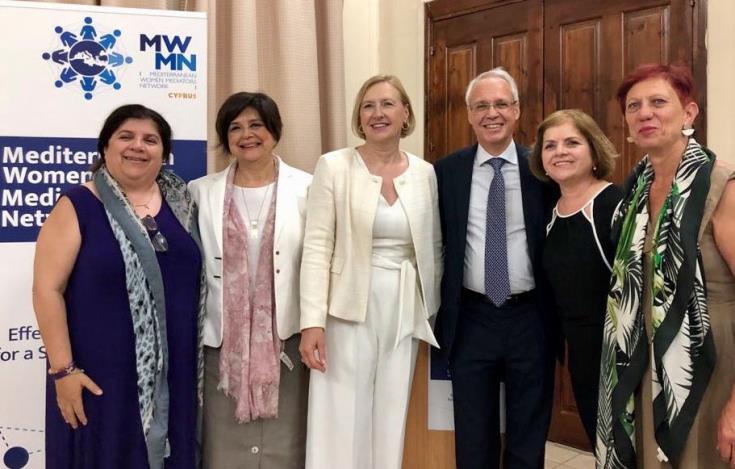 Nowhere more than in Cyprus is there the need for active engagement and commitment of women from both communities in boosting bicommunal cooperation and building support comprehensive settlement, the Ambassador of Italy in Nicosia Andrea Cavallari has told the Cyprus News Agency (CNA) on the occasion of the launch of the Cyprus Antenna of the Mediterranean Women Mediation Network (MWNM) on May 17 at the Ledra Palace hotel, in the Nicosia buffer zone.

With this initiative, which marks the first localisation of the MWMN, the women of Cyprus take the lead, and join forces with the wider regional/global effort to enhance women’s meaningful and effective participation in sustaining peace, inclusive and democratic societies, which has been a priority since the adoption of the United Nations Security Council Resolution 1325 (2000) on Women, Peace and Security.

Acknowledging the need to foster women’s participation in a key region for global peace and stability, Italy decided to establish a Mediterranean Women Mediators Network, that was launched in Rome on October, 26, 2017 at the Ministry of Foreign Affairs and International Cooperation. This initiative is promoted by the Italian Ministry of Foreign Affairs and International Cooperation in collaboration with Istituto Affari Internazionali (IAI) and Women in International Security Italy (WIIS).

“It is with great pride that we have inaugurated on 17 May the very first national antenna of the Mediterranean Women Mediation Network here in Cyprus,” Cavallari told CNA, and noted that had established the network two years ago, in the framework of its longstanding engagement in the field of women’s rights, to respond to the pressing need to foster women’s participation in peace processes, mediation efforts and peacebuilding in the Mediterranean area, a region that is key for global peace and stability.

He also underlined the significance of Cyprus as the first local branch of the network, recalling UN Secretary-General Guterres’ latest Good Offices report and the important role played by his Special Representative in Cyprus, Elizabeth Spehar, who participated in the inaugural ceremony as a keynote speaker. “The launch of the first antenna of the Mediterranean Women Mediators Network is a landmark moment, concluded the Ambassador; we do hope that it will prompt the creation of antennas in other Mediterranean countries,” Cavallari noted.

One of the founding members of this initiative in Cyprus, Kalliope Agapiou-Josephides, told CNA that the inauguration of the Mediterranean Women Mediation Network/Cyprus constitutes a significant development in the efforts to promote gender equality, democracy, peace and security.

She noted that the Mediterranean Women Mediation Network brings together Women from all Mediterranean countries and constitutes an amazing network to unleash the untapped potential with a view to achieve gender equality, democracy, peace and security.

Josephides said that two issues which are pivotal in this effort is the coherent and sustainable approach on which it is based and its connection with all regional networks and the connection between the local, regional and global level.

He went on to note that the current regional networks are the Mediterranean Women Mediation Network, the Nordic Women Mediators, the Women Mediators Across the Commonwealth and FemWise-Africa.

Moreover, Josephides noted the prospects of forging a global women mediation union in September in New York, something that will give a new dynamic and will create new prospects. She said that the UN study on the implementation of resolution 1325/2000 substantiates that a coherent peace processes, the participation of women and the inclusion of the gender dimension lead to peace agreements with greater prospects for their duration.

According to a press release issued about the launch event, the UNSG Special Representative in Cyprus Elizabeth Spehar said, in her keynote speech, that ‘the role and potential of women in all tracks of the process is even more evident. There is an untapped potential to further involve women at all stages of the peace process in Cyprus, and the establishment of this network offers a new entry point around which Cypriot women can coalesce’.

Sabine Freizer, UN Women Regional Advisor for Governance, Peace and Security for Europe and Central Asia, Ambassador Cavallari, and Josephides, on behalf of the MWMN/Cyprus initiators highlighted the importance of women meaningful and effective participation of women in peace processes and of mediation as a tool.

The public launch event was followed by the first activity of MWMN/Cyprus on 18 May 2019, an interactive mediation workshop directed at younger women to discuss inclusive mediation and peacebuilding.

The initiative builds and follows up on a previous meeting hosted in Nicosia in July 2018 by the Cyprus Women’s Lobby with the joint support of the MWMN, the Women Mediators across the Commonwealth network, Women’s International League for Peace and Freedom (WILPF) and UNFICYP.