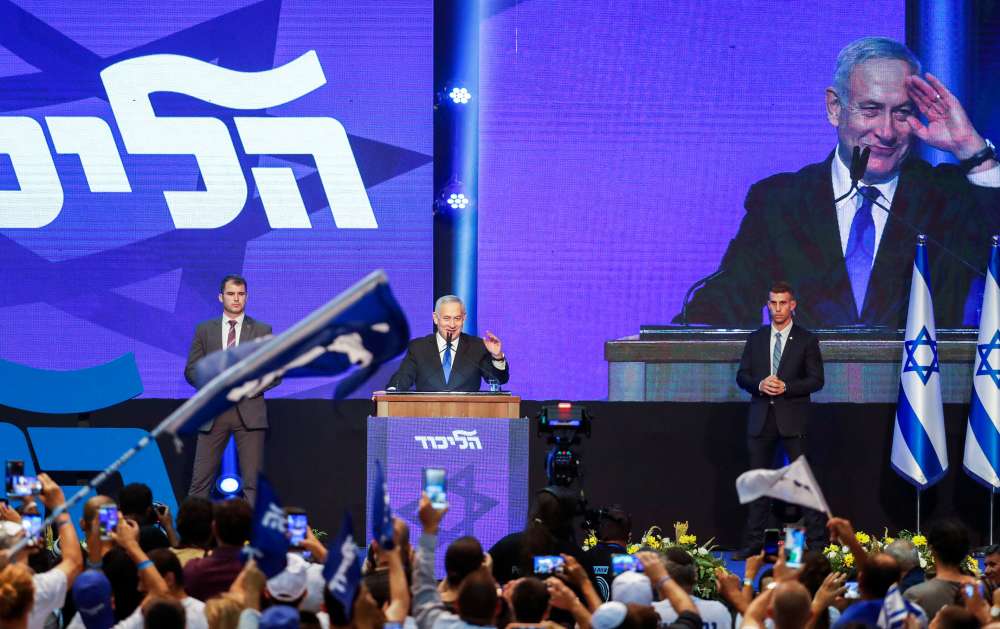 Prime Minister Benjamin Netanyahu was in a battle for political survival after exit polls following Tuesday’s election showed the race too close to call and the Israeli leader’s decade-long grip on power slipping.

Netanyahu’s main election challenger, centrist Benny Gantz, said on Wednesday it appeared from the exit polls that Israel’s longest-serving leader was defeated but that only official results would tell.

In his own speech to right-wing Likud party faithful, Netanyahu, sipping water frequently and speaking in a hoarse voice, made no claim of victory or concession of defeat, saying he was awaiting a vote tally.

Netanyahu’s appearance in the dead of night at Likud election headquarters was a far cry from his triumphant declaration five months ago that he had won a close election. His failure to form a government after the April ballot led to the new election on Tuesday.

Gantz, a former armed forces chief, beamed with confidence as he told a rally of his Blue and White Party that it appeared “we fulfilled our mission”, and he pledged to work towards formation of a unity government.

Netanyahu, he said, apparently “did not succeed in his mission” to win a fifth term.

The final election results can take more than a week, but partial results are published by the Knesset as the vote-counting proceeds, so a clearer picture will likely emerge within a day before the final tally.

By 6 a.m. about a quarter of the votes had been counted.

Revised surveys by Israeli TV stations, several hours after polls closed, gave Likud 30 to 33 of parliament’s 120 seats, a slight drop from earlier forecasts, versus 32 to 34 for Blue and White.

Neither had enough support, at first glance, for a governing coalition of 61 legislators, and Netanyahu’s ally-turned-rival, former Defence Minister Avigdor Lieberman, emerged as a likely kingmaker as head of the far-right Yisrael Beitenu party.

The updated polls showed that without Yisrael Beitenu’s projected eight to nine seats, stalemate could ensue: Likud would have the support of only up to 55 legislators, down from 57 in the earlier exit polls, for a right-wing coalition. Blue and White could enlist the backing of no more than 59 for a centre-left government.

Netanyahu, who highlighted his close relationship with U.S. President Donald Trump during the campaign, said in his 3 a.m. speech at Likud election headquarters in Tel Aviv that he intended to establish a “strong Zionist government” that would reflect the views of “many of the nation’s people”.

His description of a future administration appeared to open the way for Jewish parties not part of his current government to join.

It also seemed to be a swipe at Gantz, and the possibility that Netanyahu’s rival might try for a governing coalition with the tacit support of an Arab party, which many right-wingers see as disloyal to Israel.

The Joint Arab List made a strong showing in Tuesday’s election and was projected to capture 13 to 15 seats in the legislature, compared with 10 won by various Arab factions in April’s election.

Coalition-building could be complicated: Lieberman has said he would not join an alliance that included ultra-Orthodox parties – Netanyahu’s traditional allies. Lieberman ran on a platform largely focused on weakening the influence that religious parties have on everyday life in Israel.

Gantz has ruled out participating in an administration with Netanyahu,if the Israeli leader is indicted on looming corruption charges.

Dubbed “King Bibi” by his supporters, Netanyahu, 69, had already been stung by the April poll.

Three corruption investigations and the Israeli attorney general’s announced intention to charge him with fraud and bribery have also chipped away at Netanyahu’s seeming invincibility, 10 years into consecutive terms as prime minister marked by a sharp focus on security that resonated with voters.

Netanyahu, who can argue at a pre-trial hearing in October against indictment, has denied any wrongdoing.

An election loss could leave him more at risk of prosecution in the graft cases, without the shield of parliamentary immunity that his current political allies had promised to seek for him.

“Unless that miraculous turnabout between the exit polls and the actual results happens – the Netanyahu magic has been broken,” Anshel Pfeffer, author of a Netanyahu biography, wrote in the left-wing Haaretz daily.

Campaigns run by Likud and Blue and White pointed to only narrow differences on many important issues: the regional struggle against Iran, the Palestinian conflict, relations with the United States and the economy.

An end to the Netanyahu era would be unlikely to bring about a significant change in policy on hotly disputed issues in the peace process with the Palestinians that collapsed five years ago.

Before the last election, Trump gave Netanyahu a lift with U.S. recognition of Israeli sovereignty over the Golan Heights, captured from Syria in the 1967 Middle East war. This time, the White House seems more preoccupied with Iran.

The Trump administration plans soon to release an Israeli-Palestinian peace plan that may prove a dead letter: The Palestinians have rejected it in advance as biased.

In what was widely seen as a bid to draw votes away from ultranationalist parties, Netanyahu last week announced his intention to annex the Jordan Valley in the occupied West Bank, where the Palestinians seek statehood.

But Blue and White, while vowing to pursue peace, has also said it would strengthen Israeli settlement blocs in the West Bank, with the Jordan Valley as Israel’s “eastern security border”.

In Gaza, Palestinians awaited the results of the vote.

“This election affects many things in our life,” said Mohamad Abdul Hay Hasaneen, a janitor in the city of Khan Younis. “There might be limited escalations after the election, but I don’t think this would result in a full war.”

By In Cyprus
Previous articlePaphos: Father arrested after kidnapping own children
Next articleAnastasiades: China’s support even more important amid Turkey’s renewed violations