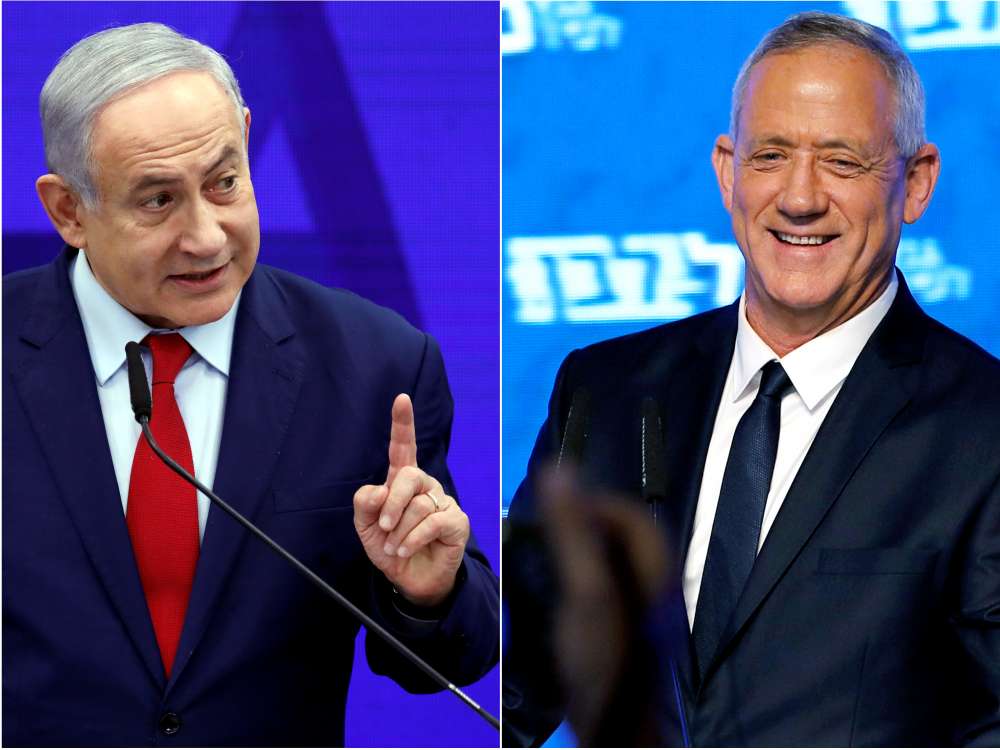 Israeli Prime Minister Benjamin Netanyahu faces a battle for political survival in a closely fought election on Tuesday that could end his 10-year domination of national politics.

The two main parties’ campaigns in Israel’s second parliamentary election in five months point to only narrow differences on many important issues: the regional struggle against Iran, ties with the Palestinians and the United States, and the stable economy.

An end to the Netanyahu era would be unlikely to lead to a big change in policy on hotly disputed issues in the peace process with the Palestinians that collapsed five years ago.

The election was called after Netanyahu failed to form a coalition following an April election in which Likud and Blue and White were tied, each taking 35 of the 120 seats in the Knesset, or parliament.

Netanyahu, 69, has cast himself as indispensable and blighted by voter complacency over his tenure – the longest of any Israeli prime minister. He was prime minister from June 1996 until July 1999 and has held the post since March 2009.

Warning he may be replaced by “leftists” who would weaken Israel in the eyes of both foes and friends, Netanyahu has flooded the airwaves and social media with calls on his Likud faithful to turn out in force.

“It’s up to you! The (Likud) lead is very small,” he appealed hoarsely in a video message posted on Twitter.

Polling stations opened at 7 a.m. (0400 GMT) and will close at 10 p.m. when Israeli media will publish exit polls giving a first indication of the outcome.

Both Netanyahu and Gantz, 60, have tried to energise their bases, and poach votes from smaller parties.

Netanyahu portrays Gantz as inexperienced and incapable of commanding respect from world leaders such as Trump. Gantz accuses Netanyahu of trying to deflect attention from his possible indictment on corruption charges that the prime minister has dismissed as baseless.

Hagit Cohen, a 43-year-old social worker, said she would back Blue and White rather than her former favourite, the now fringe Labour party: “I don’t want my vote to be wasted. Gantz may not be perfect, but enough is enough with Bibi (Netanyahu).”

Gantz also worries about public apathy. Interviewed by Army Radio, he urged Tel Aviv residents to “put down their espressos for an hour” and vote – a nod to the secular, middle-class constituency he hopes to mobilise against pro-Netanyahu religious-nationalists.

“There is a definite sense of fatigue. Many Israelis are fed up with the politicians, or expect more of the same,” said Amotz Asa-El, research fellow at Jerusalem’s Shalom Hartman Institute.

Netanyahu, Asa-El said, “has always divided the electorate into ‘theirs’ and ‘ours’. This time he’s reading the political map even more closely and knows that he needs every extra vote.”

Before the last election, Trump gave Netanyahu a boost with U.S. recognition of Israeli sovereignty over the Golan Heights. This time, the White House seems more preoccupied with Iran tensions.

Netanyahu’s Jordan Valley announcement last week evoked little U.S. enthusiasm. The Trump administration plans soon to release an Israeli-Palestinian peace plan that may prove a dead letter: The Palestinians have rejected it in advance as biased.

The Palestinians and many countries consider all Israeli settlements in the West Bank to be illegal under the Geneva Conventions relating to occupied territory. Israel disputes this, citing security needs and biblical, historical and political connections to the land.

Still, the telegenic Netanyahu’s open door in Washington and other world capitals, at a combustible time on Israel’s borders with Syria, Gaza, and Lebanon, remains a big draw domestically.

“There’s no one else running who is worthy of being prime minister,” said Alon Gal, a 53-year-old hi-tech manager who plans to vote Likud after previously supporting a party further to the right. “With him, at least I know who I am dealing with.”

Weeks of wrangling over who should be tasked with forming the next government could follow the election. Opinion polls indicate Yisrael Beiteinu could hold the key to the next coalition because it is forecast to win double its representation in the Knesset, from five seats to 10.