Israeli president: EastMed could be “one of the greatest underwater projects” in the world 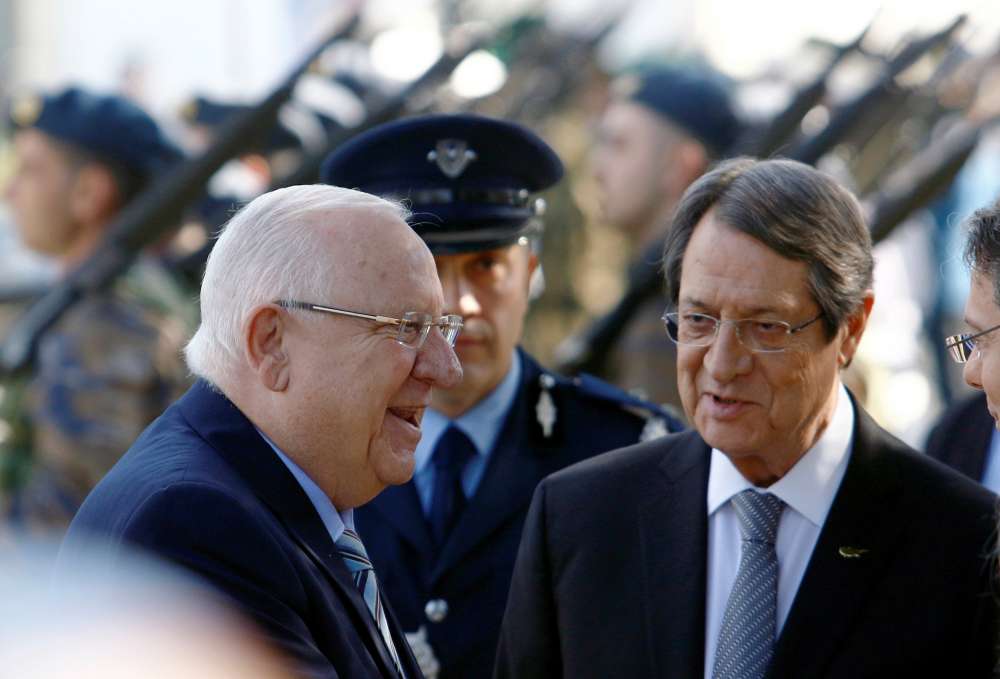 Israel’s President Reuven Rivlin said on Tuesday that the EastMed pipeline could be “one of the greatest underwater projects in the world”.

Rivlin, who was speaking at the Presidential Palace after talks with Cyprus President Nicos Anastasiades in the context of an official visit to Cyprus, also spoke of the possibility of extending the mechanism for trilateral cooperation set up by Cyprus, Israel and Greece.

On his part President Anastasiades also said that energy constitutes a “strategic pillar of cooperation” and spoke of a “vision of transforming our neighbourhood through cooperation and establishing synergies.”

During his statements and referring to the trilateral cooperation between Cyprus, Israel and Greece the Israeli President said that “our prime focus right now is on developing the Eastern Mediterranean pipeline.”

This, he pointed out, “could be one of the greatest underwater projects in the world.”

“Cyprus and Israel can and must partner around shared interests and true friendship,” he continued. This bilateral strategic partnership, Rivlin added, “is now a trilateral one together with Greece and it can be extended into a larger partnership as we were talking together in our meeting.”

Rivlin also said the two countries have “excellent cooperation in emergency, in medical care and the security ties between our two countries have never been better. Our navies and commando units share space, knowledge and experience.”

“Thanks to our intelligence, security and terror prevention cooperation Cyprus and Israel and the Mediterranean are much – much safer,” he pointed out.

Referring to the economic ties between the two countries Rivlin said that they “are strong and they are growing stronger with over $650 million in commerce per year and almost a quarter of a million tourists who are coming to your beautiful country,” inviting Cypriots to also visit Israel.

Cyprus and Israel, President Anastasiades said in his remarks, “have now embarked in a new era of partnership. A new era based on our common vision: To substantially and strategically upgrade our relationship in all possible fields of co-operation, especially on energy, security, economy, tourism, research and innovation.”

Referring to Cyprus’ foreign policy, he noted that it “is guided by our vision of transforming our neighbourhood through cooperation and establishing synergies.”

“Within this prism, we see the development of our relations with all our neighbours as a vehicle for promoting security and stability across the entire region,” he added.

According to President Anastasiades “energy is of course a strategic pillar of our cooperation which creates a very positive regional interest as proven by our joined commitment to the EastMed pipeline, a project that taps to the security of supply and energy diversification of Europe.”

“At the same time, we also consider the trilateral partnership we have established with Israel and Greece to be one of significant geostrategic value,” he stressed.

“Our synergies are beacons of hope, the voices of reason and an exemplary choice that can ease tensions, assist in resolving conflict and in providing a regional tool – kit for a widely beneficial code of conduct,” he continued.

Referring to the discussions they had he assured Rivlin “that Cyprus, which shares mutual principles and values with Israel, is not only a neighbour or Israel’s border with the EU, but a stable, secure, reliable and predictable friend.”

On EU-Israeli relations he pointed out that Cyprus’ position is crystal clear that “Israel is a very important strategic partner and a stabilizing force in the Middle East region.”

Cyprus, President Anastasiades noted, “will continue to be an advocate in support of the security of the State of Israel, and calling for refraining from unilateral measures which could detrimentally affect EU-Israeli relations or even Israel’s own security.”

“We also exchanged views on crucial regional issues and challenges and reviewed ways of combating asymmetric threats, such as the growing surge of terrorism,” he noted.

Referring to the Cyprus problem, he said he briefed his Israeli counterpart on the latest developments and efforts of the Special Envoy of the UN Secretary-General to reach an agreement on the “terms of reference” as regards the way forward.

“What is of course required is for all interested parties and stakeholders to adopt a constructive stance and engage on the basis of good will with the Special Envoy, in order to establish the necessary conditions that will allow the dialogue to resume,” he stressed.

“I reiterated to the President that the vision of all Cypriots remains none other than to reach a viable and functional settlement that will reunite Cyprus in a truly independent and modern European State, free of any foreign dependencies,” he pointed out.

President Anastasiades also expressed “the sincere gratitude and appreciation of the Government and the people of Cyprus to the President and the government of Israel for the principled stance and important support they offer to Cyprus in our efforts to reach a comprehensive settlement in line with the UN Security Council Resolutions.”

On the state of play on the Middle East peace process and the prospects for the return to direct and meaningful negotiations, he said he “reiterated our support to a two -state solution and peace deal that would bring about peace, stability and prosperity for Israelis and Palestinians, which would benefit the entire region and its peoples.”

Cyprus has been divided since 1974, when Turkey invaded and occupied its northern third. Repeated rounds of UN-led peace talks have so far failed to yield results. The latest round of negotiations in July 2017 at the Swiss resort of Crans-Montana ended inconclusively.

By In Cyprus
Previous articleCustoms seize contraband tobacco at checkpoints, airport
Next articleThe Grammar School: An all round education