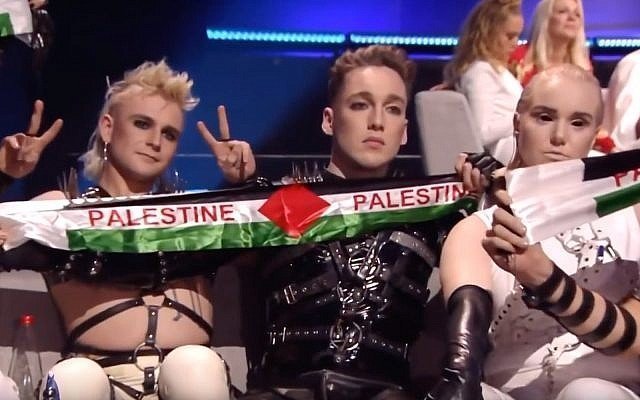 The Israeli broadcaster of the Eurovision Song Contest said on Sunday that an unauthorised display of Palestinian flags by Iceland’s band could draw “punishment” from the event’s organisers.

During the point-tally of Saturday’s final, members of the eclectic punk ensemble Hatari held up scarf-sized Palestinian flags. A vocalist, Klemens Nikulásson Hannigan, flashed a V-for-victory sign. Many in the Tel Aviv audience responded with boos.

In earlier remarks to Eurovision fan site wiwibloggs, Hannigan had criticised Israel’s settlements and what he described as its “apartheid” in occupied Palestinian territory.

The flag display, briefly caught on the live TV relay of the 41-country contest, marked the only disruption of a show that had been a focus of anti-Israel boycott calls, and drew a swift rebuke from the European Broadcasting Union (EBU).

“The Icelanders will apparently be punished by the European Broadcasting Union, which is really not tolerant of those who violate its rules,” Eldad Koblenz, CEO of the EBU’s Israeli counterpart Kan, told Ynet TV.

An EBU spokesman declined direct comment, saying the matter was under discussion.

EBU rules allow for disqualifying contestants who do not abide by requirements for a “non-political event”. Asked what other penalties might be available, the spokesman said: “In the past there have been financial sanctions for rule breaches.” He did not elaborate on these cases or sums.

Hatari’s song “Hate Will Prevail”, during which the leather- and latex-clad performers thrashed around a grenade-shaped globe as flames shot from the stage, came 10th of the 26 finalists.

Their flag display did not impress the Palestinian Campaign for the Academic & Cultural Boycott of Israel, which had urged countries to shun the Tel Aviv Eurovision. None did.

Koblenz was more upbeat about a political display by Madonna, whose much-anticipated, two-song guest performance in the final featured two back-up dancers, with Israeli and Palestinian flags on their backs, walking in an embrace.

“We are very happy that she came, certainly in a reality where very few artists are prepared to come to Israel,” he said, while allowing that “perhaps she’s had more successful shows”.

Madonna, who has previously performed in Israel and is a devotee of Jewish mysticism, said on Twitter on Sunday that she was grateful “for the opportunity to spread the message of peace and unity with the world”.

Kan had no advance notice of Hatari’s or Madonna’s flag displays, Koblenz said: “That’s the price of a live broadcast.”