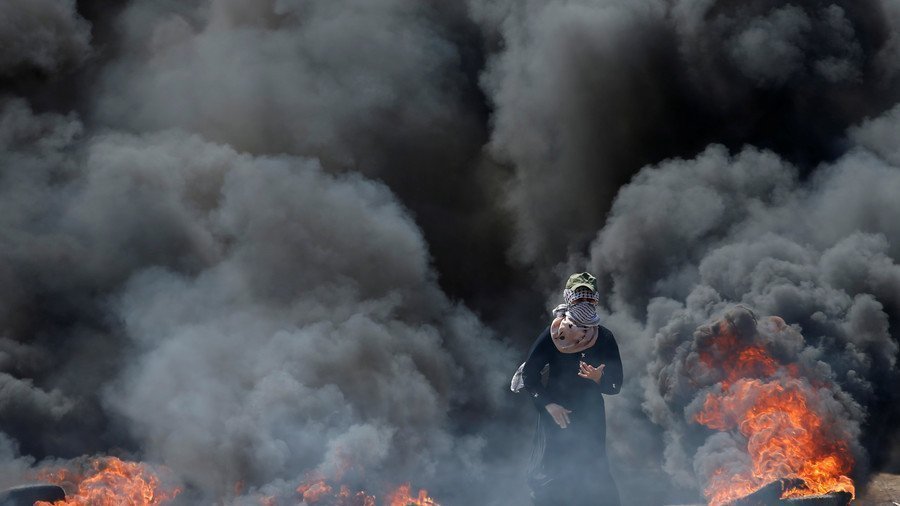 Israeli forces have shot dead several Palestinian protesters during demonstrations ahead of the US Embassy inauguration in Jerusalem, the Palestinian health ministry said Monday.
Two children, aged 12 and 14, are among the fatalities. More than 500 protesters have been injured in Gaza so far Monday, according to the ministry.

There are around 10,000 protesters gathered at the border fence and thousands more within half a mile of the vicinity, according to Israeli Defence Forces. Live footage from Ramallah in the West Bank and Khan Younis in the southern Gaza strip shows crowds gathering to demonstrate against the embassy relocation.

Clashes have also reportedly broken out between protesters and the Israeli Defense Forces in Bethlehem.

The first of Monday’s deaths was a 21 year old man, killed east of Khan Yunis, a spokesperson for the ministry said earlier. A 29 year old man was later killed east of Jabalya. The latest deaths bring the number of fatalities since the Great March of Return protests began six weeks ago to 52.

Tuesday marks the commemoration of Nakba Day, which Palestinians refer to as their forced mass exodus from their homes during the establishment of the state of Israel, and which is celebrated among Israelis as Independence Day. Thousands of people have gathered near the border to take part in Monday’s protests.

Huge demonstrations are expected to mark the May 15 event, which brings to a close the six-week Great March of Returndemonstrations.

Earlier the Palestinian Red Crescent said that 22 Palestinians have been wounded from Israeli gunfire in Monday morning’s clashes. A journalist is reportedly among those wounded.

The IDF dropped leaflets warning people in Gaza to stay away from the security fence ahead of Monday’s protests. Demonstrators in North Gaza brought down an IDF drone that was allegedly dropping fire bombs on tents, according to the Great Return March movement.