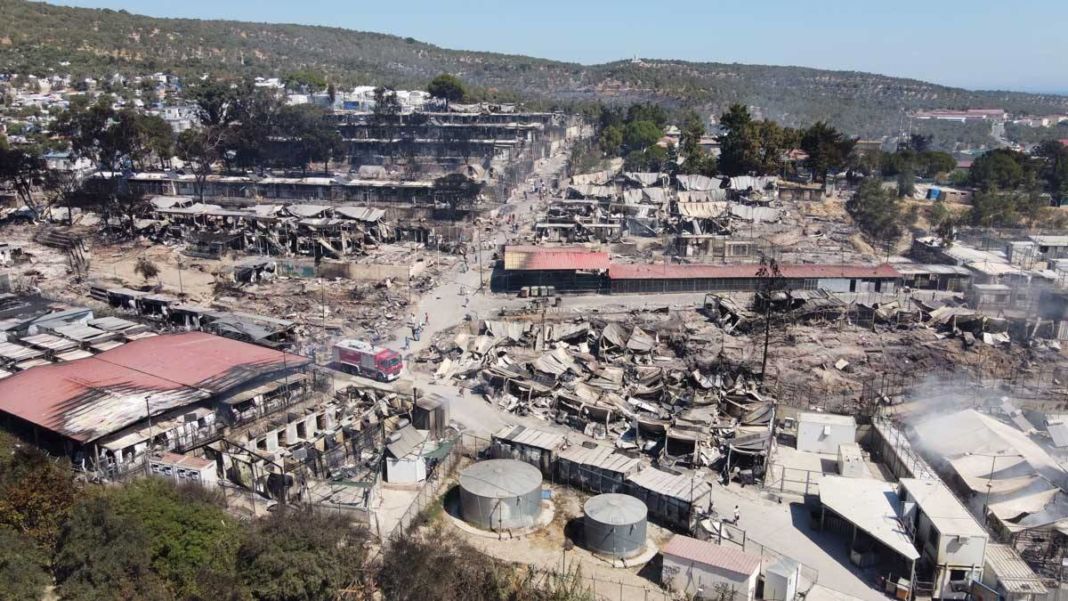 The island of Lesbos was declared in state of emergency for four days starting from today, Wednesday, at the order of Deputy Civil Protection and Management Crises Minister Nikos Hardalias and by decision of the general secretary of civil protection Vassilis Papageorgiou.

The state of emergency was declared for reasons of public health, the civil protection general secretariat announced.

The participants discussed the situation at Moria hotspot and the measures to be taken to deal with the situation after a fire broke out earlier in the day.

A fire broke out at Moria hotspot on the island of Lesbos at 2 am after clashes began when some of the 35 refugees who tested positive for Covid-19 refused to move into isolation with their families.

Interior MInister Takis Theodorikakos, Migration and Asylum Minister Notis Mitarachi and the president of the National Organisation for Public Health (NPHO) Panagiotis Arkoumaneas will depart for Lesbos on Wednesday to be briefed on the condition in Moria, government spokesperson Stelios Petsas announced after the conclusion of the extraordinary government meeting held earlier at the Maximos Mansion.

Petsas also said that the three top officials will give a press conference at 18:00 on Wednesday.

“The disaster at Moria is total”, Secretary General of the Reception of Asylum Seekers of the Migration Policy Ministry Manos Logothetis stated to the Athens-Macedonian News Agency (ANA) and added: “By order of Migration Policy and Asylum Minister, I am going to the island to assess the situation. We must see in cooperation with all institutions what solutions we can provide for the temporary and long-term hospitality of the residents there. It is a first priority for everyone.”.

Meanwhile, police has sent reinforcements to the island to deal with the situation.

The area outside the reception and identification centre has been totally destroyed while a large part of the area inside the centre has suffered serious damage.

The asylum centre and its equipment have reportedly been burnt while the Intensive Care Unit has also been damaged.
A large part of the population of Moria has fled to the surrounding areas, while another part has moved to the city of Mytilene.

A strong police force has been lined up close to the PPC facilities not allowing them to enter the city.