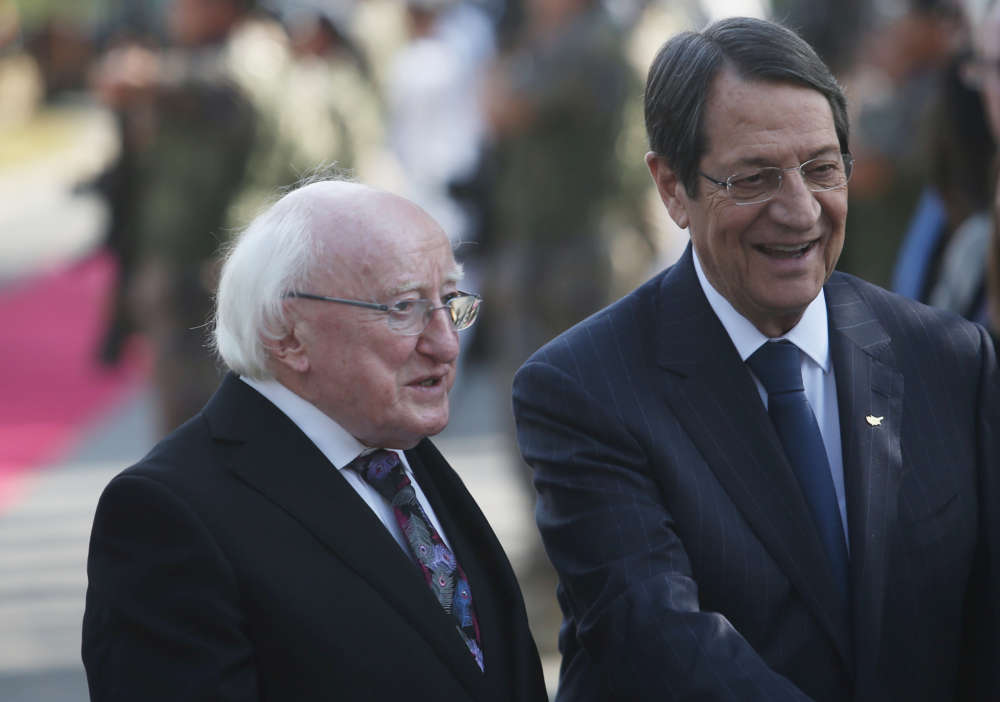 Visiting Irish President Michael Higgins said in Nicosia on Monday that matters of the maritime and activities at sea should be undertaken under international law.

And that he shares the concern of Cyprus in relation to the recent Turkish drilling activities within the divided island’s Exclusive Economic Zone (EEZ).

“I also share the concern of Cyprus in relation to the recent arrival of drilling and prospecting offshore,” he told the press after face to face talks with President Nicos Anastasiades.

“Matters of the maritime and activities at sea should be undertaken under international law and any necessary negotiations undertaken in that context,” he added.

Higgins also expressed his deep concern at what is happening in northern Syria and the unilateral intervention by Turkey in that area.

The possibility of coercion or forced returns of refugees is an appalling one and totally unacceptable, he said.

“May I also express, in the strongest terms, how any attempt at demographic change is not acceptable. I urge Turkey to seek an alternative, negotiated approach, one that rejects military intervention and its resulting humanitarian distress,” he added.

Higgins, who arrived in Cyprus on Sunday for a three-day state visit with his wife Sabina, is also accompanied by Ireland’s Minister of Justice and Equality Charles Flanagan.

It is the first official visit by an Irish president, a largely ceremonial role, since 2006. And it follows Anastasiades’ official visit to Ireland in 2016.

The Irish President also said that given the mutual experience of the two countries of conflict and peace-building, Ireland has traditionally been sensitive to the challenges Cyprus faces in its ongoing search for a resolution of the Cyprus partition issue.

“Our sensitivity and solidarity will continue…Ireland has supported the United Nations peacekeeping mission in Cyprus over many decades. Our record of contribution to UN peace-keeping missions is something of which we are very proud, being continuous, as it has been since the earliest days of our joining of the United Nations,” he added.

Irish people, he added, understand very well how overcoming a legacy of conflict and division is a difficult and time-consuming process. And that it is one requiring great patience and dedication but achievable with political will on all sides.

“The good will of others with an informed understanding in such endeavours is so valuable, and that the role of the United Nations, for example, remains central to the process of conflict resolution, and achieving reconciliation,” he also said.

“Knowing that Cyprus’s tireless efforts in search of a settlement will continue, Ireland will do whatever it can to be of assistance in such endeavours, in the hope for lasting peace and reconciliation on the island of Cyprus,” he added.

Ireland will continue to support all of Cyprus’ efforts to reach a resolution that will ensure peace and stability for the island through the establishment of an honourable, balanced and durable settlement, he said.

The two Presidents who also exchanged views on Brexit, climate change, migration and bilateral relations, both stressed the strong ties between Cyprus and Ireland.

Anastasiades then sent the message that Higgins’ visit constitutes another important milestone in the relationship between the two countries.

“Although located on the opposite peripheries of Europe, our common struggles and aspiration for independence, freedom and the drive to succeed, as well as our membership in the same European family, have brought us closer together, throughout time,” he added.