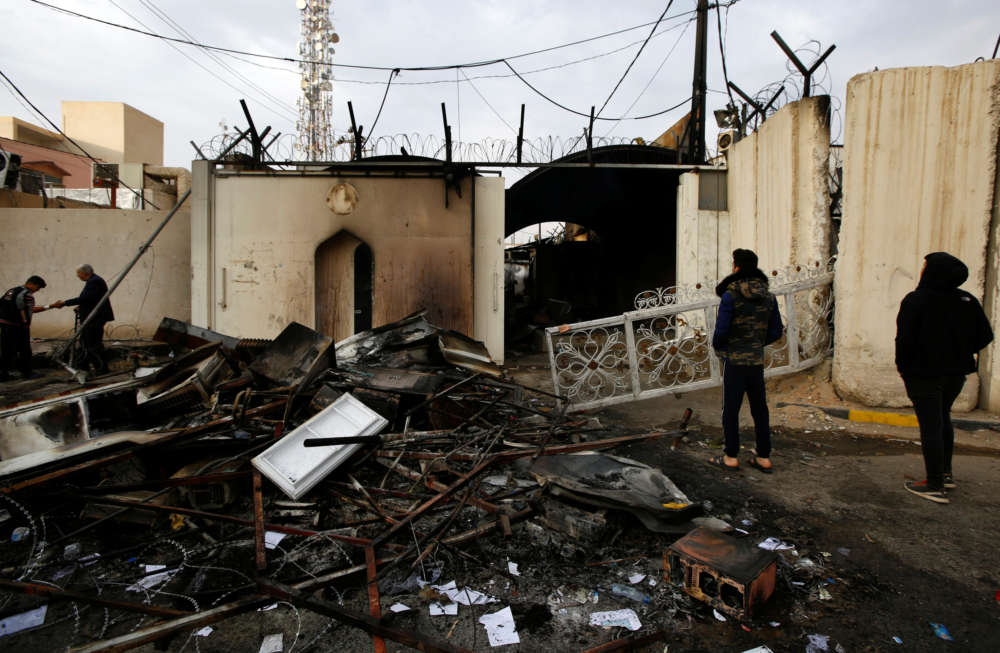 Authorities set up joint military-civilian “crisis cells” to try to stem unrest and a paramilitary commander vowed to use force to stop any attack against Shi’ite Muslim religious authorities.

The torching of the consulate in Najaf, the southern holy city, escalated violence in Iraq after weeks of mass demonstrations that aim to bring down a government seen as corrupt and backed by Tehran.

It was the strongest expression yet of the anti-Iranian sentiment of Iraqi demonstrators as the gulf widens between a largely Iran-aligned ruling elite and an increasingly desperate Iraqi majority with few opportunities and minimal state support.

The inability of Iraq’s government and political class to deal with the unrest and answer protesters’ demands has fuelled public anger.

The protests, which began in Baghdad on Oct. 1 and have spread through southern cities, are the most complex challenge facing the Shi’ite-dominated ruling class that has controlled state institutions and patronage networks since the 2003 U.S.-led invasion that toppled long-time Sunni ruler Saddam Hussein.

Young, mostly Shi’ite protesters say politicians are corrupt, beholden to foreign powers – especially Iran – and they blame them for a failure to recover from years of conflict despite relative calm since the defeat of Islamic State in 2017.

Security forces opened fire on protesters who had gathered on a bridge in Nassiriya before dawn, medical sources said. Sixteen were killed and dozens wounded, they said.

A curfew was imposed in Najaf after protesters stormed and set fire to the Iranian consulate late on Wednesday. Businesses and government offices remained closed in the city, state media reported.

“The burning of the consulate last night was a brave act and a reaction from the Iraqi people – we don’t want the Iranians,” said Ali, a protester in Najaf. “There will be revenge from Iran I’m sure, they’re still here and the security forces are going to keep shooting us.”

A protester who witnessed the burning of the consulate said security forces had opened fire to try to stop it.

“All the riot police in Najaf and the security forces started shooting at us, as if we were burning Iraq as a whole,” he said, declining to give his name.

The military commander of the Popular Mobilisation Forces (PMF), an umbrella grouping of paramilitary groups whose most powerful factions are close to Tehran, said the groups would use full force against anyone trying to attack Iraq’s most powerful Shi’ite cleric, who is based in Najaf.

“We will cut the hand of anyone trying to get near (Grand Ayatollah Ali) al-Sistani,” commander Abu Mahdi al-Muhandis said in a statement on the PMF website.

Observers said the events in Najaf would likely bring a tough response, rather than pushing the government into enacting reforms.

“Apart from casual statements … the government has not announced any plan (or) given any clear account of what measures it will take,” said Dhiaa al-Asadi, advisor to powerful populist cleric Moqtada al-Sadr. “Initiatives are going to be scarce.”

Fanar Haddad, senior research fellow at the National University of Singapore’s Middle East Institute, said the government might use the burning of the Iranian consulate as a pretext for an even more heavy-handed crackdown.

“The downside from the protesters’ point of view is this might reinforce the government’s narrative that protesters are infiltrators, saboteurs and up to no good,” he said.

“It sends a message to Iran but also works to the advantage of people like Muhandis … (giving) a pretext to clamp down and framing what happened as a threat against Sistani.”

Authorities set up “crisis cells” in several provinces to try to restore order, a military statement said on Thursday. They would be led by provincial governors but include military leaders who would take charge of local security forces.

The violence has killed more than 350 people, according to police and medics.

By In Cyprus
Previous articleLimassol: 22 year old in critical condition after being hit by car
Next articleCFA Research Challenge focuses on Vassiliko Cement Ltd