Iraq security forces clash with protesters in Baghdad and other cities 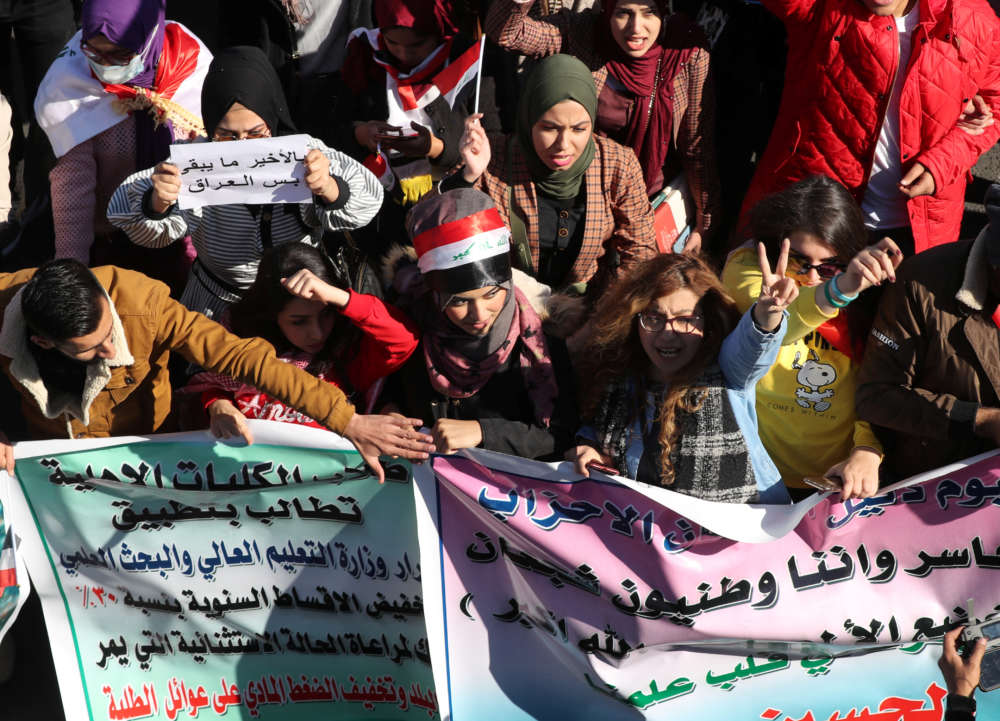 Iraqi security forces fired teargas and live bullets in renewed clashes with protesters in Baghdad and other cities on Sunday, Reuters witnesses and security sources said.

The security forces tried to clear sit-in camps across the country and fired live rounds in the air after protesters resisted with petrol bombs and stones. At least 14 protesters were wounded in the capital and at least 17 were wounded in Nassiriya in the south, medical sources said.

Demonstrators are seeking the removal of what they see as a corrupt ruling elite and an end to foreign interference in Iraqi politics, especially by Iran, which has come to dominate state institutions since dictator Saddam Hussein was toppled in a 2003 U.S.-led invasion.

Populist Shi’ite Muslim cleric Moqtada al-Sadr had called for demonstrations against the U.S. Embassy in Baghdad and other cities on Sunday but cancelled them, with his office giving “avoiding internal strife” as the reason.

Tens of thousands had protested against the U.S. military presence in Iraq in a march on Friday that was called after the U.S. killing of Iranian Major-General Qassem Soleimani and an Iraqi paramilitary chief in Baghdad this month.

Sadr, who has millions of supporters in Baghdad and the south, said on Saturday he would end his involvement in anti-government unrest.

“We protest because we have a cause. I don’t think Moqtada Sadr or any other politician will change our mind,” said a protester in Baghdad who declined to give his name.

Sadr’s supporters have bolstered the protesters and at times have helped shield them from attacks by security forces and unidentified gunmen, but began withdrawing from sit-in camps on Saturday following his announcement.

Security forces then removed concrete barriers near Baghdad’s Tahrir Square, where demonstrators have camped out for months, and across at least one main bridge over the Tigris River.

“I don’t go to protests often but I came out today because of what they did yesterday. I want to express my solidarity with my brothers in Tahrir,” said Hussain Ali, a student.

PROTESTS IN THE SOUTH

Protesters in Baghdad were coughing and washing their faces and eyes to rid themselves of the effects of the gas while medical workers provided first aid, as the site was inaccessible to ambulances, a Reuters reporter said.

Earlier on Sunday, hundreds of university students had gathered in Tahrir square, the main protest camp, chanting slogans against the United States and Iran.

In the centre of Nassiriya, protesters set fire to two security vehicles and hundreds of other demonstrators controlled the city’s main bridges, a Reuters witness said.

In the southern city of Basra, more than 2,000 students arrived at a protest camp, another Reuters witness said.

The unrest resumed last week after a lull of several weeks, following the killing of Soleimani, to which Iran responded by ballistic missile attacks on two Iraqi military bases. The killing has revived tensions in Iraqi politics and delayed the formation of a new government.

The Iraqi High Commission on Human Rights called on all sides to exercise self-restraint and keep demonstrations peaceful.

By In Cyprus
Previous articleFurther update on coronavirus from Health Ministry
Next articleMayor of China’s Wuhan expects another 1,000 virus cases in the city