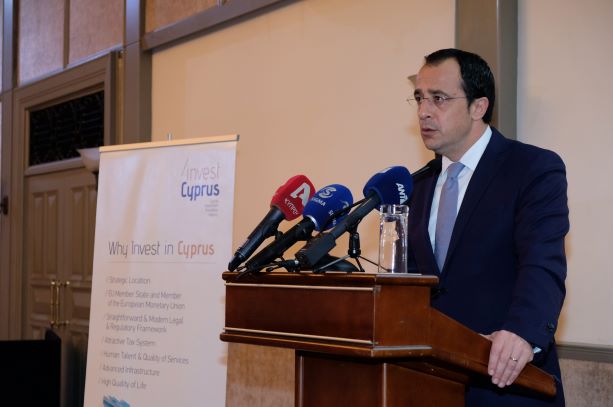 A joint event organised by the Cyprus – East and South East Asia Business Association and the Cyprus Investment Promotion Agency (Invest Cyprus) with the Foreign Minister Nicos Christodoulides as keynote speaker, has confirmed Cyprus’ readiness to take advantage of the investment opportunities opening up in the Southeast Asian market.

The minister and the chairmen of Invest Cyprus and the Cyprus – East and South East Asia Business Association, Michalis P. Michael and Stelios Demetriou  all agreed that that this is an especially promising market, with great prospects for the investment promotion sector and the development of trade relations.

Invest Cyprus Chairman Michalis P. Michael explained that the Agency aims to penetrate these big markets that hadn’t been sufficiently explored and exploited up until now and in this context, the Agency included the Southeast Asian market in its revised strategy and Action Plan for 2019.

The Agency has already made efforts to promote Cyprus in this market, while more actions will follow in the next few months.

“Our aim is to move in a targeted and methodical manner, as we believe that this market offers great and serious opportunities, that Cyprus must exploit. I’m referring to opportunities in the investment funds sector, the establishment of corporate headquarters, as well as our country’s development into a regional tech centre, with a view to attract companies operating in the field of technology and innovation. Particular emphasis will be given to the Shipping sector through specific actions, while the Shipping Deputy Ministry to the President will be involved in the whole effort”, he stressed.

Christodoulides referred to the Foreign Ministry’s effort to deepen relations with key international political players such as Japan and India, as well as other Southeast Asian countries.

He reminded attendees of the EU-Japan Economic-Business Partnership Agreement, which was signed last June, underlining that this development creates great prospects to enhance relations between the two sides as well as bilateral relations between EU Member States and Japan.

He also announced that the Republic of Cyprus will open an embassy in Japan within the next two months. Moreover, he noted that in the context of deepening relations between the two sides, Japan’s State Minister for Foreign Affairs,  Kazuyuki Nakane, visited the island last July, while he himself visited Japan last October.

Christodoulides also addressed the huge prospects that the South-East Asian market offers and analysed the Foreign Ministry’s intention to invest in economic diplomacy. The Foreign Minister described today’s event, as well as the establishment of the Cyprus-South East Asia Business Association as a very important development, recognising the very significant prospects that exist for Cyprus in this region.

In addition, the chairman of the Cyprus- East and South East Asia Business Association, Stelios Demetriou, explained that the Association’s vision, is to search and exploit new economic horizons in cooperation with the CCCI and Invest Cyprus, by approaching the business community of Japan and the developing Southeast Asian countries, in a proactive, persistent and methodical manner.

In this way, Cyprus’ business and trade network can grow. “Such initiatives are necessary in order to give Cypriot entrepreneurs the opportunity to innovate; something that is especially important for our afflicted economy. Japan and the Southeast Asian countries present a new and promising opportunity for the future of our business services, products and investments,” Demetriou stressed.