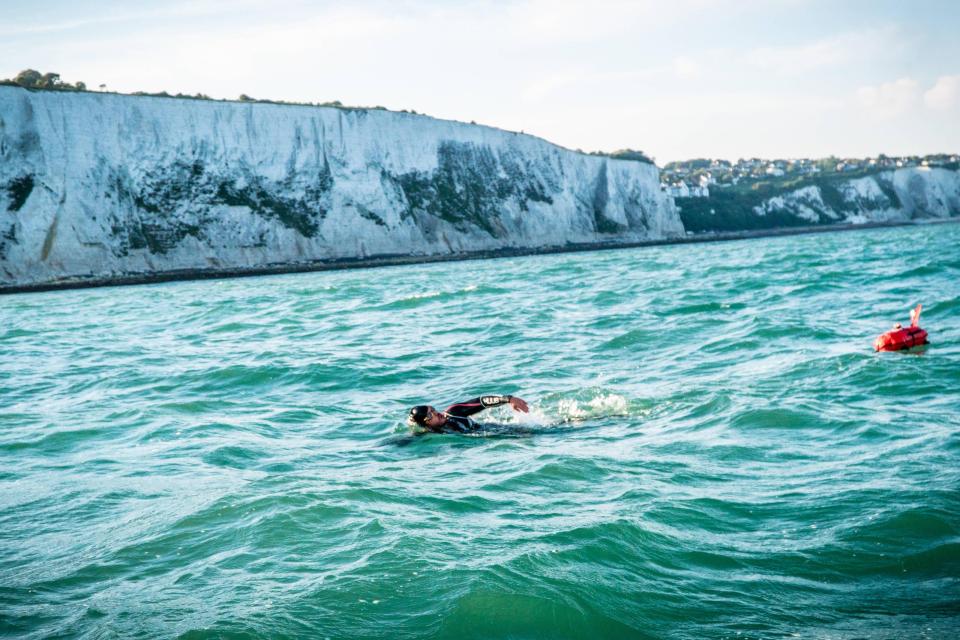 After 157 days at sea battling storms, jellyfish and whirlpools, adventurer Ross Edgley finally clambered on to dry land at Margate on Sunday to become the first person to swim around the coast of mainland Britain.

The 33-year-old from Lincolnshire began his epic swim from the same Kent beach on June 1, spending 12 hours a day in the water on his 1,780-mile quest clockwise around the coast.

As he approached the English seaside town he was joined by 300 swimmers for the last mile and two planes provided by Red Bull, who supported his venture, etched a heart in the morning sky.

In August Edgley, who only left the water to sleep and eat in his support boat, broke the record for the longest stage sea swim of 73 days set by Benoit Lecomte, who swam across the Atlantic Ocean in 1998.

He said his initial plan was to set a new record for the world’s longest ‘current neutral’ swim but after spending two days with the Royal Marines was told that idea was “a bit lame”.

“One of the guys said ‘man up and swim around Britain’ and I thought ‘yeah, that’s got a ring to it’,” Edgley told Reuters as three large pizzas were delivered to him at Margate’s iconic theme park Dreamland.

“I met (boat crew skipper) Matt Knight and after a five-minute chat we said ‘let’s do this’.

While racing across shipping channels and dealing with ever-changing tides was challenging, Edgley, who in 2016 completed the world’s longest rope climb, equivalent to the height of Mount Everest, and once pulled a car around a marathon, said the jellyfish stings were the worst, especially at night.

“That’s when you don’t even know what kind of jellyfish it was,” Edgley, who broke four world records during his journey, said. “I remember the huge natural whirlpool in the Gulf of Corryvreckan, I got badly stung.

“It was searing pain. I popped my head out to ask the crew what was happening and they told me it was still attached to my face. Its tentacles were caught in my goggles and it was slapping me in the face.”

Edgley also had to contend with a ‘disintegrating tongue’ caused by immersion in salt water, chafing sores from his wetsuit which his crew named “Rhino Neck” and near hypothermia.

It was not all bad though. A balmy British summer helped and there were only two ‘named’ storms to endure.

He also got support, in various forms.

“My favourite day was in the Bristol Channel near Lundy Island,” he recalled. “I had spent three days battling the strong tides when a minke whale breached next to me. For five miles swam under me and to the side of me.

“It was a female and we think she thought she was guiding an injured seal!”

There was also a memorable cake delivery in Scotland.

“In the Hebrides I was resting one morning when a lady named Iona, swam out to the boat, with a cake resting on her head,” he said. “She had been following my swim and saw the boat from her house and decided to bake a cake and swim out with it.

“It was still warm, it was incredible. It didn’t last long!”

It made a change from bananas. Edgley estimates he munched 500 during his epic journey and burned 500,000 calories.