Sachs: Good leadership important to overcome crises such as pandemic 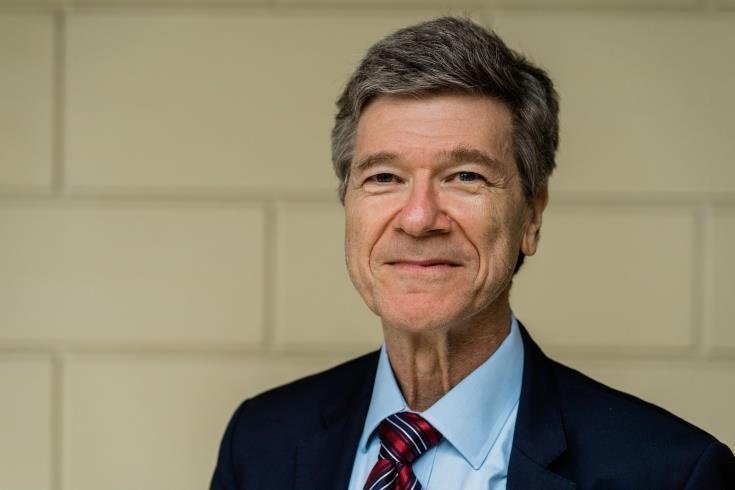 In an interview with the Cyprus News Agency, Sachs criticizes US President Donald Trump, expresses his doubts that a vaccine against the coronavirus will be available soon, refers to the role of Cyprus against climate change in the Mediterranean region and speaks about his new book.

Asked what the first lesson to be learnt from the pandemic is professor Sachs says “the first lesson is that this epidemic can be controlled with good leadership and effective public health systems.”

So, he adds, “while this is a dire emergency it is one that we can surmount.”

“Fortunately, Cyprus and Greece have done relatively better than other parts of Europe and I am counting on that to continue.”

Sachs also says that “the Asia Pacific region has generally contained the epidemic but the United States suffers from another disease called Donald Trump.”

So, he adds, “we have a completely incompetent and malevolent President and it shows up in the 110,000 deaths in our society.”

“So, I think this is a very powerful argument for good governance because it is a terrible scourge that gets out of control when the government is incompetent or malevolent,” he notes.

Skeptical about a vaccine soon

Replying to a question as to whether he believes a potential vaccine would be made available widely or whether major countries would compete to stockpile it he expresses the view that there are two questions.

One, he says, “when will there be an effective vaccine and second how fair will the use of this vaccine be.”

“Of course these are huge uncertainties compounded by the fact that there is a lot of self interest of companies announcing positive results that don’t really mean that much,” he points out.

The reason, according to professor Sachs, “is that that it attracts more investors it boosts stock prices; it makes it easier for them to get grants from governments.”

“So, I am a bit skeptical that we are going to get a vaccine sometime soon,” he notes.

Of course, he continues, “we have been told in the United States that a company named Moderna is already going to start producing a vaccine this Fall.”

He expresses the view that “it is very -very unlikely that such a vaccine could be available and used in a large scale.”

“The technological base of that vaccine is unproven. Even for it to be safe for use would require that there be a trial period of a year or so before it is put into the bodies of millions or even billions of people,” he explains.

Certainly, he adds, “there are other vaccine candidates, the may or may not work.”

He points out that “we have to act under the presumption that there won’t be a vaccine soon.”

Now, he says, “if a vaccine is developed then the question of fairness and distribution will come up and there are different camps and power structures in this.”

According to professor Sachs “the United States government is very much in the hands of its drugs companies, so the US government will likely try to defend the patent rights and the prerogatives of the US.” To that effect he recalls President Trump’s policy “America First”.

He expresses the view however that “the backlash globally would be very strong.”

“Many other countries have aligned to have justice as the basis of the vaccine use and to have it available widely and so on,” he says.

He notes that “we will probably have a struggle over this.”

“You know it would be very good fortune to have a vaccine soon potentially, but let’s plan also that there isn’t one and use the more traditional means of testing and quarantine and face masks and other kinds of protection,” he advises.

Struggle to make politics work for everybody

Asked whether he believes sustainable development goals for 2030 are realistic following the US withdrawal from the Paris Climate Agreement he says that “I think that we should recognize that in the Americas we have three Presidents that are known as populist Presidents.”

“Trump, Jair Bolsonaro in Brazil and Lopez Obrador in Mexico. It is very telling that all three of these presidents are in favour of fossil fuels, are promoting policies that are against the climate control and are failing to control the epidemic as well,” he adds.

So, professor Sachs continues, “the epidemic of COVID is really out of control in the US, in Mexico and in Brazil. What does this tell us? It says that these leaders don’t really care to protect the people. Even when it is a virus they don’t care.”

And so, he wonders, “how are they going to care when it is something that takes 10, or 20 or 30 years to manifest all the risks.”  He also refers, among other things, to President Trump wanting the oil companies to make money, adding that “they pay his campaign.”

“He wants power and wealth so climate change doesn’t fit into his playbook,” he says.

He poses the question “what does this mean for humanity?” replying at the same time that “it means we have a real struggle to make politics work for everybody.”

He also refers the Mediterranean region and the oil & gas interests there. On Cyprus, he notes that it is incredibly vulnerable to climate change, torising sea levels, to drying climate to higher temperatures.

“I happen to know Cyprus has loads of sunshine, some of the best sunshine in the world, so this is really a great opportunity to develop the renewable energy for example,” he adds.

Cyprus can play role in the Mediterranean against climate change

Asked whether he believes that a small country like Cyprus could make a difference in the greater effort for sustainable development and combating climate change he replies “absolutely.”

“President Anastasiades has said that this is a priority for the region. He faces all the pressures in the region, hydrocarbon countries but he knows very well how dangerous this is for the Eastern Mediterranean region so he has really been leading to make sure that political leaders in the region know the dangers and therefore get together to find solutions and this can make a very big difference,” he notes

We have it all now, he points out, adding that “Trump I believe is the worst President we have ever had and in just a short period of time, he has wrecked the economy, failed to control the epidemic, provoked social unrest and is provoking a geopolitical crisis together. It is very unusual.”

Asked to say a few words about his new book “Ages of Globalization” he replies that “the idea is to understand the nature of our interconnected world by looking at the history of that interconnection from the beginning of our species.”

The book, starts 70,000 years ago with the dispersal from Africa and discusses the seven stages of globalization, he says. These include the dispersal, the birth of agriculture, the equestrian age, the classic age, the discoveries of sea routes from Europe to the Americas and to Asia and the industrial age.

“Now I say we are in the fork of the seventh age, the digital age,” he says.

“I believe that this is having fundamental transformative effects that are being accelerated right now by the epidemic itself, because we are moving dramatically to a digital economy just in a matter of weeks actually,” he adds.

According to professor Sachs “everybody is realizing that we are not going to go back to the things we did before.”

He speaks of three transformations. One, he says, “is the technological transformation and all of that entails.”  A second, he continues, “is the geopolitical transformation we are moving to a multi-polar world with a much more powerful and important East Asia and off course China playing a huge role in that.” And third, he adds, “we are in what geologists call the Anthropocene meaning the age where human activity is changing the planet’s physical system so dramatically that we have put ourselves at great peril.”

So, he points out, “the seventh age is digital, multi-polar and environmental, all in a very complicated mix”

“There are almost eight billion people on the planet right now, so, it is a very complicated moment of change that we are living through,” he concludes.

By In Cyprus
Previous articleBA, easyJet and Ryanair launch legal action against UK quarantine
Next article‘Thank you for saving lives,’ Blood Bank tells donors ahead of World Blood Donor Day