Royal Caribbean Cruises looking at Cyprus as a potential destination 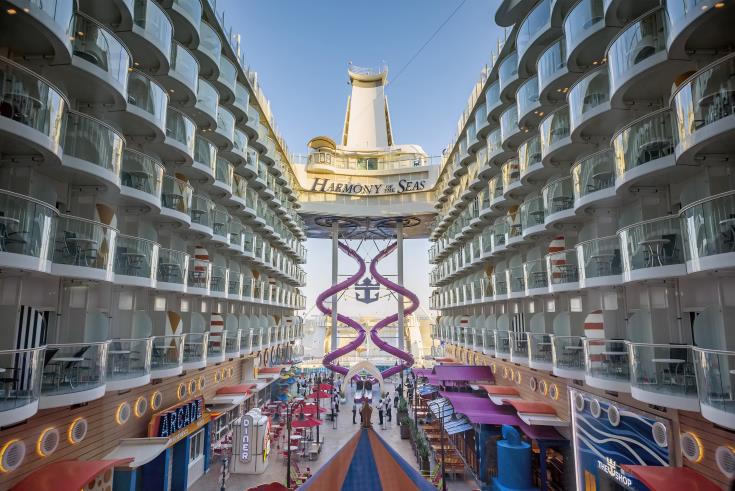 One of the Vice Presidents of the Royal Caribbean Cruises was in Cyprus to praise the authorities for their cooperation and express certainty that Cyprus is a potential destination for cruises.

Senior Vice President of Royal Caribbean International, Sean Treacy welcomed Health Minister Michalis Hadzipantelas and Deputy Minister of Tourism, Savvas Perdios, as well as Deputy Minister of Shipping Vasilis Demetriades, Limassol Mayor Nikos Nikolaides and other officials aboard the Harmony of the Seas which is currently docked at Limassol Port.

The Cyprus News Agency (CNA) visited the cruise liner which is one of the largest in the world, the biggest being Royal Caribbean’s Symphony of the Seas.

Together with the Jewel of the Seas, which commences its first cruise on Saturday from Cyprus, “Harmony of the Seas” is currently enjoying the facilities provided by the Republic of Cyprus during the pandemic.

In his remarks, Treacy  said the invitations were a way to thank and acknowledge the efforts and support provided to the cruise industry and specifically Royal Caribbean International over these past several months.

He also said it was a celebration of Jewel of the Seas which is in its first new home port, sailing from Limassol and welcoming the first guests tomorrow, 10th of July on cruises to Greece. Travel agents who returned from a sample cruise on the Jewel of the Seas said they were blown away by the experience, according to Treacy, who added that the crew did a spectacular job on board but also the feedback they had about the friendliness in Cyprus, the efficiency of the port and how well the safety protocols were delivered.

He said it is a momentous occasion for all as this is the first time that “our ships are here in Cyprus. We have also announced that next summer in 2022, the Rhapsody of the Seas, another one of our ships, will be visiting Cyprus, allowing even more guests to visit this incredible island”. In fact, he added, “we see Cyprus as a real potential destination for us for the future and we will be looking in our plans to return to Cyprus as a cruise home port. Cyprus is a wonderful destination for cruise and this beautiful island and its culture, its friendly people are just been waiting to be discovered whatever the season”.

Cyprus, said Treacy,  provides such an amble opportunity to experience “something new, interesting and exciting, including adventure activities, events, cultural customs and places of interest to visit. Our guests are very excited to get back to travelling and to discover new destinations and to experience new adventures. And together, Royal Caribbean and Cyprus offer just that”.

On his part, Perdios said that it was “nothing but an honour” for Cyprus to have Royal Caribbean in its ports and seas.

He said they have been working for almost ten 9-10 months to get the protocols right, to facilitate in every way that we could so you could bring your ships here.

Cyprus, he added, is an unbelievable country with 11,000 years of history and represents many cultures and civilisations.
“We are not only a sun and sea destination. Despite the pandemic, despite the crisis we have been working so hard for the last two years to improve our product, emphasizing the authentic experiences, the special interest products that we have so companies like Royal Caribbean start thinking about bringing more ships to Cyprus even in the winter”, the Minister concluded.

The Harmony of the Seas is a gravity-defying ship with the tallest slide at sea, Ultimate Abyss, deck-defying stunts at the AquaTheater, and the robot-helmed Bionic Bar. It has four pools, 2,747 rooms, golf course, carousel, basketball facilities and many more. It is getting ready to launch cruises from Barcelona, Spain, with Mediterranean destinations.