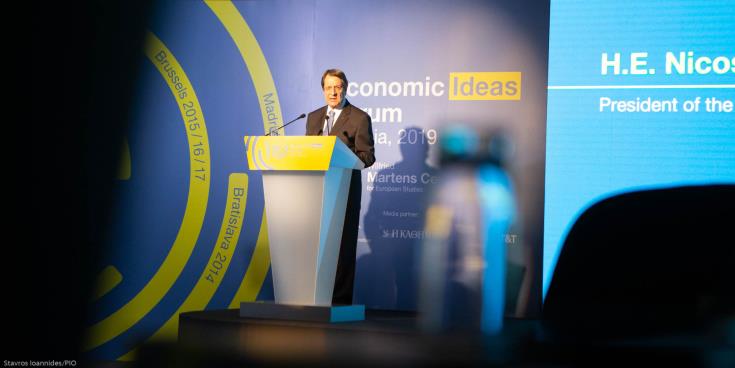 Cyprus President Nicos Anastasiades vowed today that the government will comply with EU fiscal rules and maintain a prudent public financial management and promote structural reforms that would put the Cypriot economy on a sustainable growth path.

Anastasiades’ comments were made during the 10th Economic Ideas Forum organised by the Wilfried Martens Centre of European Studies and the Glafkos Clerides Institude.

In his address Anastasiades recalled his government assumed office in 2013 when Cyprus GDP shank with a rate of 6% while the economy expanded by 4% in 2018 and is forecasted to grow in the medium term with a rate above the EU average. He is also recalled that unemployment which peaked at 16% is now at 7.5% following a downward trend.

He however assured that “we are ready to adapt or adopt in consultation with the Parliament any reforms that might be deemed necessary in order to enhance our competitiveness and in particular all essential reforms in order for the public service to become more efficient and flexible in accordance with the best practices of other European member states.”

“In the context that we are determined to maintain our compliance with the common fiscal rules as  a country, which in the recent past has paid the price of a careless management in public finances, we recognize that sustainable public finance management is a requirement for macroeconomic stability, we remain committed to maintaining a policy of a balanced budget, he added.

However, Anastasiades pointed out that the EU must follow policy initiatives that help the EU economy compete on a global scale and not policies that erode their competitive advantages.

“We remain firm in our position that certain policies including in the area of taxation should remain sovereign responsibility,” he stressed.

The argument against policies that hamper member-states’ advantages was supported former Maltese Prime Minister Lawrence Gonzi who said small EU member-states such as Cyprus and Malta “face major challenges that bigger countries in the EU don’t have.”

“The EU focuses on tax structures, without understanding that we have to balance the disadvantage we have sometimes balanced with tax features,” he said.

Furthermore, during a panel discussion, Finance Minister Harris Georgiades said the lessons learned from the Cypriot crisis is that “if we defy common logic there will be trouble.”

“If you are were spending a billion more than your income, if you have an unsustainable credit growth then there will be trouble.,” he said, adding that the way out was following a pro-business path, with no tax hikes and a public spending cut once which maintain predictability both for households and private “a key perquisite which the private sector, business and households will need.”

“This is what we tried to do and this what has delivered results success story or not,” he said.

On his part, Marten Verwey, head of the European Commission’s Structural Reform Service who participated in the Troika missions during Cyprus’ economic adjustment programme, referred to the Cypriot financial crisis, citing the flight of Icarus.

“A credit boom which lead to excessive optimism and wrong investment decisions and when credit conditions tightened the whole thing collapsed,” he said, highlighting the need for reinvigorating the structural reform effort in Cyprus.

On his part, Gonzi said states must always keep a close eye of their economies. “The biggest lesson is you need to carry out constant oversight of economic structures, reforms are often unpopular, keep pension system sustainable, remain competitive, look at public sector entities, restructure them. Carry out reform especially in good times,” he added.

By In Cyprus
Previous articleOccupational therapy programme for refugees, asylum seekers in Cyprus
Next articleBiker killed in Kokkinotrimthia collision